Cemil Meriç: An intellectual in purgatory 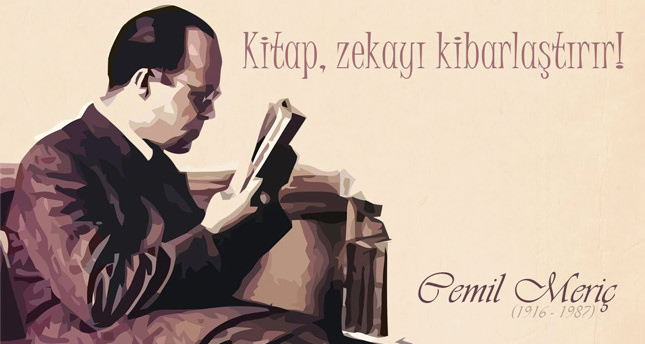 Born in 1916, is one of Turkey's true intellectuals who wrote numerous articles and books without designating his subject matter as political, cultural, literary, local or universal

Modern intellectuals have been generally questioned over their personal lives and political action. Political engagement and personal ethics have been used like the sword of Damocles against them. Since there is no common definition for the "intellectual," being an intellectual has itself become a question of ethics. Does an intellectual have to do what he says all the time? Is the intellectual a modern saint? Should they be one?

The above questions are open to debate worldwide. Even two people may not agree on the definition of "intellectual." Similar to the word "culture," normative definitions of both exceed descriptive ones. I suppose this is because both words are gilded ones, gilded by intellectuals or men of culture. We have too many expectations from the intellectual and culture though neither can be our savior. Since both the intellectual and culture are somehow about knowing, and knowledge has been traditionally believed to save people, this expectation can be said to be rooted in the tradition. But is our fellow intellectual traditionalist at all? Should they be one?

Cemil Meriç, who in my opinion is the cliché intellectual, wrote many articles and books on the definition of political and cultural terms including the intellectual, culture, left and right, modernism and secularism, Westernization and localism, religion and ideology, et cetera. His writing can be followed on two axes. One axis, let's say the vertical axis, rises on his subjective analysis on horizontal topics. And the horizontal axis consists of the above topics. Meriç does not separate his subject matter as political, cultural, literary or local and universal. Like many of his Turkish and Western contemporaries, he thinks "everything is connected to everything else."

So, for Meriç, there were not separations like modern and traditional, Eastern and Western, local and universal. He asks, "Which is Western?Vico or Ibn Khaldun?" He implies that Ibn Khaldun of 14th century Muslim Egypt has a more realistic and materialistic way of thinking than that of Giambattista Vico of 18th century Italy. In "Muqaddimah," Qadi Ibn Khaldun explains the clash between the nomadic tribes and the civilized cities based on historical facts while Vico in the "Scienza Nuova" (The New Science) depends on idealistic and intellectual views. "Scienza Nuova" does not seem to be "a new science" to us. But Muqaddimah is now accepted as the initial text of modern sociology and philosophy of history. In other words, Meriç was right while he was questioning the orientalist cliché of "the East and the West."

Meriç has always been in the purgatory of life, of thought. He was born in 1916 in Hatay, which was under the French mandate at that time. He received a bilingual education in schools of Hatay. Some of his teachers were Frenchmen while some were Ottomans. Until Hatay was reacquired by Turkey in 1939, it remained half French and half Ottoman though the Ottoman Empire fell at the end of the World War I.

Intellectual in the middle

Mustafa Armağan, one of the major commentators on Meriç, argues that the special history of Meriç's home town aliened him from political polarization in Turkey in the first two decades of the Republican era. Though it's a slightly exaggerated point of view, Meriç really cannot be categorized in either kampfs of the cultural war in Turkey. He does not belong to any of the "three types of politics" (Islamism, Turkism and Westernism).

Yet, this does not mean that Meriç was neutral. His writing is so hot that we cannot even formulate a neutral sentence about him. He always weighs and judges. I believe that he is the most fearless Turkish writer in judging. However, he is not the typical judge of a certain ideology. If you are simple minded, you can choose his judgments that seem to support your ideas.
But any other person with other ideas can do this as well. This is why Islamists, leftists and nationalists have embraced and cursed Meriç at the same time.

He himself chose "purgatory" rather than the safe umbrella of any ideology. Sometimes he offers intellectual elitism and talks about "the ivory tower" where he found a shelter for thinking and writing. Meriç was never a part of political action. In a passage, he says that this was because of his physical blindness. Blindness made him withdraw to the life in solitude. His family and friends would read to him and write
down his personal journal and cultural articles.

Meriç compares himself to Magellan, who routed his ship to the West in order to reach to the East. Meriç's initial studies were on the sociology and socialism of Saint Simon. "Saint Simon: İlk Sosyolog, İlk Sosyalist" (Saint Simon: The First Sociologist and Socialist) is the fruit of that study. Young Meriç was eager to learn whatever he could learn about the West. He translated Balzac into Turkish. Once he said, "I have not only read Balzac but read the writers who had read him and who he also read." He suggests that in order to understand Western culture one should work like that, as well.

His hard works on French literature also made him think about the East and he began studying on Indian literature. "Bir Dünyanın Eşiğinde" (At the Threshold of a Another World) is the consequence of Meriç's curiosity about the East.

After studying Western and Eastern cultures, Meriç turned back to his homeland. "Umrandan Uygarlığa" (From Umran to Civilization), "Mağaradakiler" (Allegory of the Cave), "Kırk Ambar" (The Golden Treasury) and "Işık Doğudan Gelir" (Ex Oriente Lux) are four mature works on both Islamic and Turkish intellectual heritage and also contemporary debates. He became a serious critic of despotic Westernization. Every article in these masterpieces deals with a certain problematic concept widely used in the Turkish intellectual media. He uses his pen like a sword in these books in order to slay down the clichés and maintain a distinct and fluent understanding of concepts. He says, "Ideologies are strait jackets dressed on our understanding." From the 1960s until his death in 1987 he fought against the ideological limitations in order to create a thorough and open minded understanding of concepts, through which we think, express ourselves and discuss with others.

His final work, "Kültürden İrfana" (From Culture to "İrfan") must be read as his final testament. "İrfan" (read as "erfan", acquired from the Qur'anic Arabic) is a Turkish word which is shared by the entire Muslim world while it cannot be translated into Western languages. It refers to "knowledge," "learning," "Gnosticism," "understanding," "insight," et cetera. It is like the inner knowledge of everything. Knowing is not enough, you should also understand what you know. Meriç at the end offers "irfan" against culture. He argued, "We do not know the West. We do not know the East. But the least we know is ourselves." He wanted to know deep. And he devoted his entire life to this. And I believe this is "the" intellectual, our intellectual.