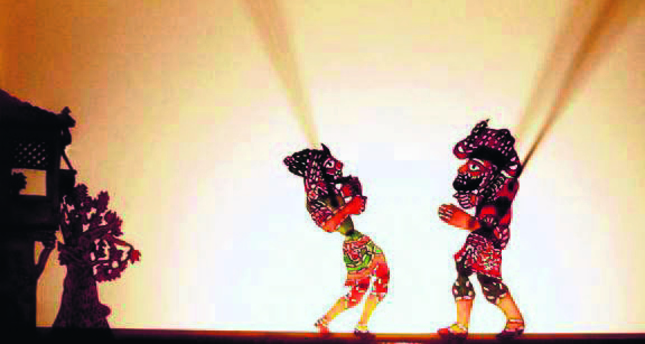 The traditional Anatolian shadow puppet character Karagöz is part of an exhibition in Italy, where he is joined by counterparts from India, Italy, Malaysia, Thailand, Indonesia, Turkey, Greece and China

ISTANBUL — "Prince and his Shade: Puppets and Marionettes Between West and East" will present shadow puppets, marionettes and masks, including Turkey's famous Karagöz, in a breathtaking exhibition that runs until April 21 at the Palazzo Brancaccio in Rome.

The catalog comes from the collection of Maria Signorelli at the National Museum of Oriental Art and aims to promote the art of shadow theater, which is still often dismissed as children's entertainment.

According to Guiseppina Volpicelli, the curator of the Signorelli collection, in shadow theater "[p]uppets are moved through sticks behind a curtain on which a light projects shapes and colors, something which enables Muslims to respect a ban on representing human figures."

The exhibition also aims to highlight the fascinating similarities between different cultures, despite the regional differences of the East and West. Even the resemblance of characters and the techniques used to portray them are strikingly similar.

The exhibition's curators emphasize the importance of the collection, which includes more than 4,000 pieces collected by Signoreli tracing Western and Eastern traditions. The purpose of the exhibition is not only to explore a form of theater that is not very popular but also to exhibit the production practices, structure, morals and complex historical scripts that the marionettes are based on.

The shadow puppets section comprises of items from India, Malaysia, Thailand, Indonesia, Turkey, Greece, and of course China, where the first shadow puppet theater appeared. Shadow puppetry dates back to the Sung dynasty (960-1279) in China. While most Chinese shadow puppets are perforated and colored and approximately 30-60 centimeters in size, Indian puppets are considerably larger, some even reaching more than 180 centimeters.

Karagöz, precursor of Italian Pulcinella Karagöz, which means black eye in Turkish, and Hacivat were the lead characters of traditional Turkish shadow theater during the Ottoman Empire. Although it is unclear when the actual plays were first performed, it is believed that the first shadow play was performed for Sultan Selim I who ruled from 1512 to 1520.

Evliya Çelebi, the 17th century traveler mentioned Turkish shadow theater as far back as the time of Bayezid I, suggesting that it was performed in late 14th century as well. The themes of shadow theater include humorous interaction between the illiterate and witty Karagöz and the educated and level-headed Hacivat.

According to one particular legend, Karagöz and Hacivat were actual people and the first performance of the play was when a commoner visited the sultan. Instead of simply complaining, the commoner put on a shadow puppet show telling the tale of corrupt officials in the palace. The sultan was so delighted with the performance that he appointed the puppeteer his grand vizier and punished the corrupt officials. Another story states that these hilarious individuals were construction workers in Bursa and their silly interactions were so distracting to the point where the ruler of the time ordered them to be executed and they were immortalized as puppets in the years after.

Curator Guiseppina Volpicelli noted in an interview to ANSAmed that Karagöz is the equivalent of Italy's Pulcinella, adding, "Perhaps less of a goody but like Pulcinella he embodies the smarts of the illiterate man who conveys through his lines the commonsense of the people.

In Turkey nowadays everybody knows by heart his adventures, just as we know those of Red Riding Hood. In the squares and roads of the country as well as in theaters, puppet shows are still very popular."