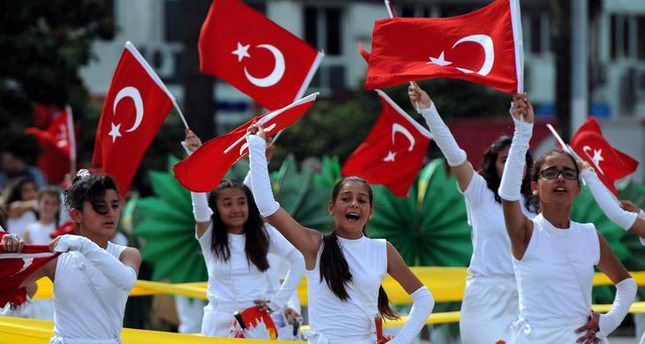 ISTANBUL — This year all art institutions affiliated with the Ministry of Culture and Tourism will draw their curtains for children on April 23 to perform various children's plays and ballets, along with other celebrations and events all around the country. The famous ballet Tan Sağtürk will perform with 250 members of the Children's Ballet of the Doğuş Children's Symphony Orchestra and TRT Ankara Radio Children's Choir. Contributing to cultural and personal development of children, state theaters will stage children's plays free of charge from April 23 to 30. They are expected to reach 5,511 children in 10 regions.

In accordance with the official statement of the Ministry of Culture and Tourism, the State Opera and Ballet, state theaters and the General Directorate of Fine Arts prepared a special program for Children's Day.

On April 23 at 7 p.m., 17,000 children will come together for a concert and ballet performance at the Arena Sports Hall. As part of Children's Day, an amateur children's folkdance group will perform at the Ministry of Education's Şura Saloon.

Mersin State Opera and Ballet joins the celebrations The Mersin State Opera and Ballet (MDOB) will celebrate the day with a special concert at 4 p.m. on the Mersin Culture Center's Opera Stage. In his statement, MDOB Director Erdoğan Şanal said different choirs from Gölcük and Mersin will perform on the same stage for this important day, adding, "With great excitement and enthusiasm we invite all local residents and children to a free Children's Day event." Children from all around the world already in Turkey Organized by the Afyon Kocatepe University State Conservatory, the seventh National Children's Day Choir Festival welcomed 28 children's choirs from nine cities. Hosting more than a thousand students, the festival attracted parents and local residents.

The students jazzed up the event with their colorful clothes and were warmly applauded for their performances. There were not only solo performances, but also choirs singing children's songs in foreign languages.

Speaking during the festival opening, Afyon Governor İrfan Balkanlıoğlu extended his gratitude to those who organized the event in the places where Turkey's War of Independence took place. Balkanlıoğlu highlighted the importance of children's choirs coming from different parts of Turkey to perform together.

The 15th International Antalya Children's Festival was also a colorful event, with approximately 1,000 children from 18 different countries gathering on the south coast of Turkey.

National Sovereignty and Children's Day marks the first gathering of the Turkish Grand National Assembly, which took place in 1920 during Turkey's War of Independence. Called Children's Day for short, the Republic was dedicated to children by Atatürk, the founder of the Republic of Turkey.

Many ceremonies are held all around Turkey welcoming children from all around the world, with the biggest ceremony taking place at the Atatürk Mausoleum in Ankara.

As Atatürk dedicated the Republic to children, a ceremony is therefore held with school children taking seats in Parliament for the day to discuss matters concerning children.

Turkey worked hard to internationalize this day and a large number of foreign countries send groups of children to participate in the festivities in Turkey.
Last Update: Apr 23, 2014 11:59 am
RELATED TOPICS