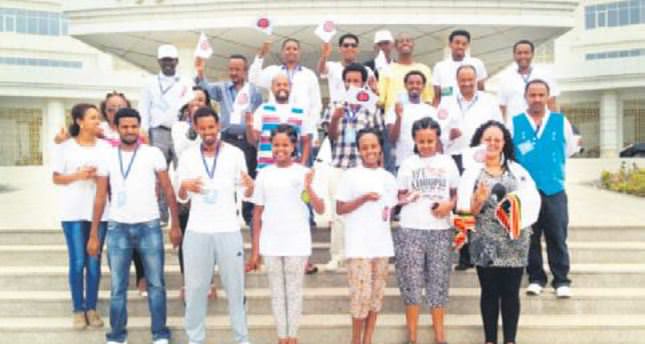 by daily sabah
Apr 29, 2014 12:00 am
ISTANBUL — The Ethiopian National Theater Group took part in the second International Festival of the Golden Age of Theater with the support of the Turkish International Cooperation and Development Agency (TİKA). The Ethiopian National Theater Group took the stage with 24 people in Turkmenistan's capital Ashgabat. The group performed "Çiftçinin Geçmişi" (The Farmer's Past) at the Mahtumkulu National Musical Drama Theater stage and another short performance the same night. When the team returned to Addis Ababa, they extended their gratitude to TİKA's Director for Ethiopia İsmail Durhat. National Theater Coordinator Towadros Tesfaye Abebe said he was happy to hear of the theater group's success. "We are happy for Turkey's meaningful support of our national theater. Our dance performance [was welcomed by] Turkish audiences.

TİKA made a significant contribution toward promoting Ethiopian theater and culture in Asia. We would like to thank all responsible Turkish officials." TİKA will continue supporting the festival in coordination with the Ministry of Culture in Turkmenistan. Previously in 2012, TİKA brought a 20-member Sudanese
folklore team for the same festival.