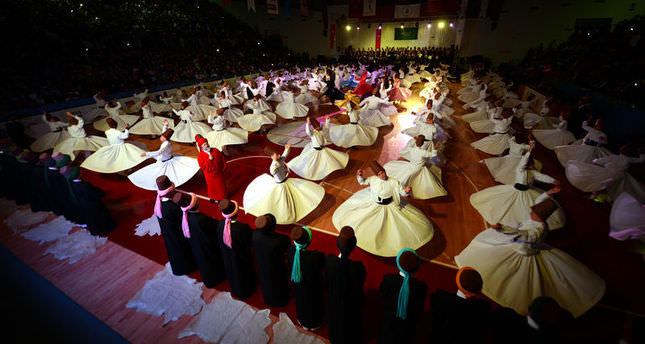 by Saliha Ziya May 01, 2014 12:00 am
ISTANBUL — Mevlana Celaleddin Rumi is, without a doubt, one of the most frequently referenced universal thinkers and spiritual masters of all time. Since his influence goes beyond boundaries and spans centuries, Rumi's life, work and doctrine continue to be the subject of many books, analyses and events. In his book "Rumi, A Source of Inspiration for Universal Justice and Peace,"

Ergin Ergül discusses Rumi as a source of wisdom from the perspective of universal justice and peace. The book contains three main chapters: Rumi's approaches to freedom and human rights, Rumi's perspective on the principle of supremacy of law, and his political and social messages. In these chapters Ergül offers a chance to find answers to the most important universal questions by turning to a sage and underlining the universality of Rumi's messages.

As both a lawyer and an admirer of Rumi, Ergül skillfully matches principle universal rules and Rumi's values. His book enables us to think that many contemporary issues of law might be analyzed with the help of Rumi's wisdom: "According to Rumi, the whole universe and all people are like a single body. Therefore, it would not be an acceptable behavior from the humanitarian perspective if the people, institutions or states with power and opportunities become indifferent to human rights violations in any part of the world.

While human rights theory of today ensures social and political equality between people, Rumi's equality approach describes humans as beams radiating from one light source and drops of the same ocean. It regards humans as branches of the same tree. The human being is the most honorable creature, according to him" (p. 32-33).

In the book, freedom of thought and expression, prohibition of discrimination, the state of law, crime policy, pluralism, violence and many other modern issues are considered within the works of Rumi and with quotations from Rumi's relevant stories or teachings. Beyond this comparison between the universal values and Rumi's original sources, which light modern day quests, Ergül draws on the sources which analyze the works of Rumi. "Freedom of expression is the foundation of being a mature person, individual development, the music and the arts from the perspective of Rumi," says Ergül. "As you are a human, as you hear, think and sense, you will tire your heart and mind to find the main truth! You will tell what you hear and find. If you cannot tell, you will make the reeds and the heaven tell the secrets of your souls!" (s.49). "Rumi, A Source of Inspiration for Universal Justice and Peace", is an interesting and remarkable book because it reveals that Rumi's political and social messages provide guidance to modern human law issues. With his book, Ergül makes the common discourse on Rumi's universal guidance tangible by bringing together universal human law with Rumi's stories and words. In addition, Ergül proves that Rumi's wisdom is not only unique for personal spiritual development or the welfare of humanity, but is also a source for a universal legal system.

As a lawyer, bureaucrat and academic, Ergül is the first person to deal with Rumi's work from the perspective of human rights and law. It is obvious that his work is an introduction to this field, which makes Rumi's work meet universal legal issues. That field certainly has to be enhanced, developed and enriched by new publications. Nevertheless, this book is very useful, not just for readers with an interest in the field, but also for the lawyers and bureaucrats who work on law, justice and peace.