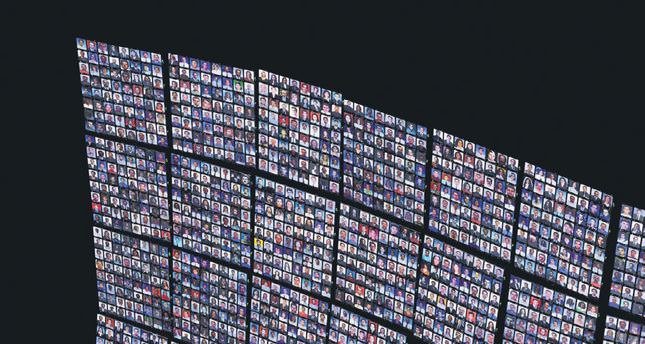 by Daily Sabah May 21, 2014 12:00 am
The exhibition which opened on April 29 aims to reflect the personality of Sabancı. Throughout his life, Sabancı merged with people through his sharp intelligence, his sense of humor and warm manner, a disposition that has opened many windows for many people.

Kutluğ Ataman's work features all the windows opened by the man himself. Ataman, whose films and video art works have a worldwide audience, created the idea for the exhibition. It constitutes a moment of silence in honor of Sabancı, emphasizing his contribution to the development of technology in Turkey. The basic element of this work, which utilizes the most advanced technology in visual arts, consists of passport-sized photographs of thousands of people from all walks of life whose paths crossed with the famous businessman in some way. Larves Artware Solutions established the technical infrastructure of this work, which is one of the largest video art examples in the world.

The work comprises approximately 10,000 LCD panels, aligned in 144 modules, each consisting of sets of 64, stacked horizontally and vertically. Güler Sabancı, the Chairperson of the Board of Directors of Sabancı Holding, said that they started the project three years ago by forming a committee to lead the preparations for the 10th anniversaries of the foundation of the Sakıp Sabancı Museum and the 10th anniversary of Sakıp Sabancı's passing away. After discussions the committee decided on Kutluğ Ataman as the person to lead the project. "I thank Kutluğ Ataman for creating this work of art which reflects Sakıp Sabancı's energy and which will allow this energy to be shared over many years," says Sabancı. The director of the museum, Nazan Ölçer noted that although traditional ways of commemoration were considered, this time they wanted something that would reflect the energy of the man and emphasize his modern and forwardlooking perspective.

After the Sakıp Sabancı Museum, the work will be exhibited at the Sakıp Sabancı Mardin City Museum and Dilek Sabancı Art Gallery, each time being redesigned in accordance with each building's architecture. Following Mardin, the piece is planned to be presented internationally at leading museums worldwide. Ataman described Sabancı as "a leader; his leadership lies in the fact that he was a successful and famous businessman, and that he changed the lives of people and the progression of Turkey." That is why instead of shooting a documentary, he decided to focus on his leadership. "I asked people who have somehow been touched by Sakıp Sabancı to give their passport sized photographs if they wish. We needed more than 30,000 participants. This was something not done before," said Ataman.
Last Update: May 21, 2014 1:28 am
RELATED TOPICS