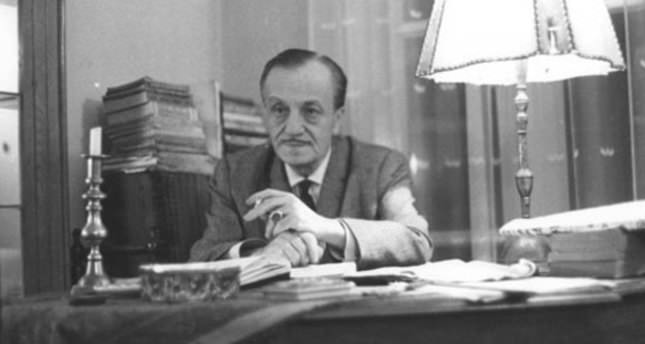 One of the most famous poets in Turkish literature, Necip Fazıl Kısakürek, was born 110 years ago on Sunday and died 31 years ago on Monday. His many fans celebrated Kısakürek's contribution to the language in ceremonies around the country to mark both anniversaries

A man etched in the minds of Turkish people, poet and novelist Necip Fazıl Kısakürek was commemorated on May 25 marking the 31st anniversary of his death. Municipalities, NGOs and institutions also organized a series of events to commemorate Kısakürek yesterday, on the 110th anniversary of his birth. He became famous with his poem "Sakarya Türküsü" (The Ballad of Sakarya) which says "İnsan bu, su misali kıvrım kıvrım akar ya" (Human as it is, flows in swirls like water). He gained further acclaim with the poem "Kaldırımlar" (The Pavements).

The late poet became an prominent name with his intellectual power, close friendship with Nazım Hikmet, wittiness, and his affiliation with the Naqshbandi Sufi order. Among his most well-known poems are "Çile" (Anguish) and "Zindandan Mehmet'e mektup" (A letter to Mehmed from prison). Prime Minister Recep Tayyip Erdoğan even started a speech by referring to Kısakürek's poem "Gurbet" (Away from Home) during his official visit to Cologne, Germany. Kısakürek started to write poetry at the age of 12. He was deeply affected by his mother's illness and when he visited her at the hospital, his mother gave him a small black notebook and remarked how much she wanted him to become a poet. The notebook full of poems belonged to a young girl suffering from tuberculosis.

Who is Necip Fazıl Kısakürek?
Kısakürek was born in Istanbul on May 26, 1905. He completed his primary and secondary education at French and American colleges. The acclaimed poet held a bachelor of arts in philosophy and a master's degree in the same field at France's Sorbonne University while adopting a bohemian lifestyle in Paris.

Following his return, he met with the profound Islamic scholar Abdülhakim Arvasi and became his fellow. Kısakürek changed his lifestyle entirely and introduced plays such as "Tohum" (Seed), "Para" (Money), and "Bir Adam Yaratmak" (To Create a Man) to Turkish literature.
He published various magazines and was later prosecuted due to his controversial articles in the Büyük Doğu(Great East) magazine. At the time of the single-party regime, the Republican People's Party demanded he be imprisoned for 100 years but was released after only a few years of incarceration. Kısakürek was awarded many prizes and dedicated himself to reflecting his great eastern thought at conferences and other events. He died on May 25, 1983. He requested people not to send flowers or play music during his funeral and that everyone participate in the funeral prayer. He asked people only to read the Quran and Al-Fatiha, the first chapter of the Quran.
Last Update: May 27, 2014 4:44 am
RELATED TOPICS