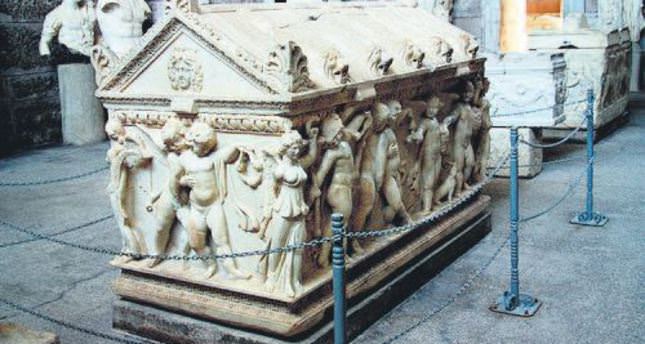 by AA May 31, 2014 12:00 am
ANKARA — According to the Turkish Culture and Tourism Ministry, a series of exhibitions showcasing ancient artworks have been held recently. International galleries regularly request loan artifacts from Turkey and thousands of pieces of artwork have been loaned out and featured in 125 exhibitions since 2003, 54 of which were abroad. A total of 23 exhibitions were held in Germany, Japan, the U.S., France, Spain, Israel, Italy, Qatar, Portugal, Swiss, Russia, Singapore and China.

The landmark exhibition "Turks: A Journey of a Thousand Years, 600-1600" by London's Royal Academy of Arts was visited by 263,000 people. Exploring the history and art of Turks, the exhibition introduced certain unique works to English audiences for the first time. Among the artworks featured are the gate of the Cizre Great Mosque, the tughra of Ottoman Emperor Suleyman I, the sword of Mehmed I, the privy chamber of Murad III, the works of Islamic painter Mehmed Siyah-Kalem and the drawer of Timurid ruler Ulugh Beg.

Japan hosted another exhibition "Treasuries of the Topkapı Palace: the Magnificent Ottoman Dynasty" in 2007. One hundred forty pieces of imperial wonders astonished Japanese visitors. The next year in 2008, the New York's Metropolitan Museum organized the exhibition entitled "Beyond Babylon: Art, Trade and Diplomacy in the Second Millennium B.C." highlighting the position of Turkey as a bridge between the West and East.

Three hundred-fifty objects from 15 different countries were included in the exhibition. Devoted to the 16th and 17th century Iranian and Ottoman-era manuscript used to foretell the future of emperors and military leaders, Washington- based Arthur M. Sackler Gallery focused on artwork of divination at the exhibition "Falname: Kehanetler Kitabı" (Falnama: The Book of Omens) in 2009. Two hundred-forty five attended the exhibition.

In addition, exhibitions on Anatolian civilization continue to attract visitors in China. The exhibition titled "Anatolian Civilizations: From Neolithic Age to the Ottoman Empire" drew in 165,000 guests. Among the interesting pieces, there are swords, accessories, Ottoman robes, helmets and Quran cases.

Countries wishing to showcase Anatolian cultural heritage must file a request with the General Directorate of Cultural Heritage and Museums under the Turkish Culture and Tourism Ministry through the Foreign Ministry.

The officials then communicate with the museums requesting to loan artifacts. An artwork list is prepared in collaboration with a scientific committee consisting of the heads of archeology and art history departments at different universities. Afterward, a state warranty is received against seizure from the country where the artworks are to be displayed. The artworks are insured and the relevant documents are submitted to the ministerial cabinet for approval and museum experts are responsible for looking after the artifacts until they are returned home.
Last Update: May 31, 2014 1:43 am
RELATED TOPICS