Flowers of the fire blossom in Russia 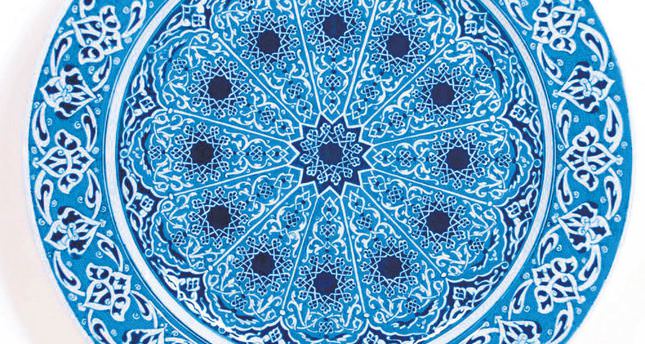 by AA Jun 13, 2014 12:00 am
Despite being one of the oldest known Turkish-Islamic artifacts, the hand-made "flowers blooming in fire" tiles have never lost their beauty. Traditional tiles are made of fired-clay soil covered with glaze and colorful patterns.

The Aegean province of Kütahya is one of the best-known centers for ceramic tiles. Lavishly decorating a number of late-Ottoman buildings, the Kütahya tiles found their way into mosques, palaces and madrasahs (religious schools) starting from the 14th century. They reached their zenith when the İznik tiles lost their popularity four centuries later.

The catchy art form appeals to many people, coming from as far as Russia to see the wonders. Three Russian women came to Kütahya to learn the unique art of tile firing. Acting as volunteer cultural ambassadors, they are being trained by world-renowned tile artist İsmail Yiğit and planning to open an art course to teach tile-making and drawing techniques when they are back in Moscow. Speaking to Anadolu Agency (AA) reporter, 35-year-old Irina Kazakovtseva said they previously saw Turkish tiles on the Internet and tried to make them on their own. Underlining their increasing infatuation with ceramic tiles, Kazakovtseva stated they are willing to introduce this art in Russia. "We are going to run specialized courses in Moscow and organize tours to Kütahya with our trainees. I believe we will be able to instil the love of Turkish tiles among Russians," she further told. On the other hand, 32 year-old Alena Panteleeva came to Turkey to leave behind her daily troubles, stress and fast-paced life. She is also eager to promote the art of tile-making in her country. Panteleeva has learned how to draw different flowers on tiles such as tulips, red roses and cloves.

The art-loving Russian described this art as "psychological therapy." Thirty-five year-old Svetlana Mazilova was taught to make ceramic plates and vases in Kütahya. "We came to Turkey to learn Turkish culture and this art onsite," she said. Famous artist Yiğit expressed his satisfaction to welcome foreign tourists at his workshop. "They want to represent Turkish culture and their skills in Russia. I believe they will successfully introduce our traditional art," he pointed.

Upon their request, Yiğit focused on Seljuk-era patterns and geometry. "I also informed them about how the Ottoman artist reflected nature on tiles. They are talented in making tiles and produced very beautiful pieces in a few days," Yiğit stated. The specialized workshop offered detailed information on the history of traditional tiles and how to transfer them to future generations. "They are happy to spend hours at the workshop. Not only the Turkish-Islamic art, but also the flowers blooming in fire will reach everywhere around the word," Yiğit expressed.
Last Update: Jun 13, 2014 1:02 am
RELATED TOPICS