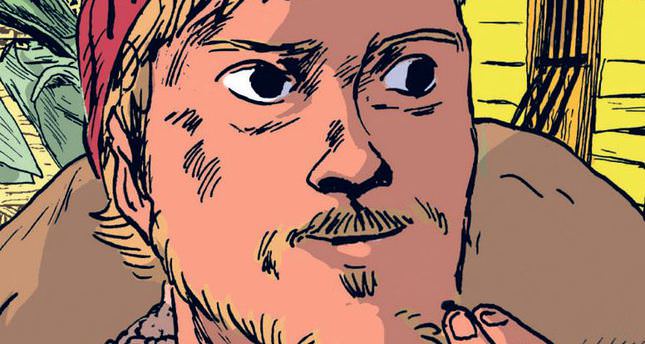 Images and stereotypes of Turkish people in French-Belgian comics

Belgium, with EU support, is marking the 50th anniversary of the arrival of Turkish immigrants by hosting an exhibition displaying comics about Turkish people and Turkey throughout the ages.

In the context of the commemoration of 50 years of Turkish immigration to Belgium, it is rather natural, in Brussels, to re-examine how comic strips represent Turkey and Turks, from the earlier Orientalist evocations through the various political evolutions that occurred throughout the 20th century. Initially, as the main sources, these representations use tourists' journeys and the picturesque images brought back by travelers - the Bosporus, huge mosques, the Grand Bazaar, pashas, veiled women and strong mustached Turkish men capped with fezzes.

Western cultural history provides another source to draw from with its representations given by Orientalist painters and writers such as Gérard de Nerval and Pierre Loti. Their evocations of Byzantium and Constantinople, the political situation in the context of the Cold War and finally, the modern megalopolis give Western notions and stereotypes throughout the ages.

One should not forget the unbelievable story of Count Claude Alexandre de Bonneval, who received the distinction of pasha with three tails from the sultan and quickly became commander of the artillery corps of the Ottoman imperial army under the name of Kumbaracı Ahmed Pasha, as goes the story told by his modern day descendant, Gwen de Bonneval, in his 2012 biography.

With regard to this evolution, one can notice that the most recent comics are inspired by historic documents, photographs and newspapers. They focus on some striking themes and some topics appropriate to represent exoticism - one can see the persistency of old images (especially those concerning the perception of women) that are linked to the pictorial knowledge of countries.

Here are some examples of the themes from the exhibition:

Hassan and Kaddour: The Bewitched Mirror - 1949 With Hassan and Kaddour, we have to deal with a "turquerie" as we shall find later with the adventures of the grand vizier Iznogoud, in the tradition of the Persian Letters of Montesquieu or the "Thousand and One Nights." Our heroes go from Cairo to Samarkand via Baghdad under the reign of Haroun al-Rachid in the eighth century.

They fight "bashibazouks," Turkish soldiers who did not yet exist in that period. Later, our two heroes - who have the faculty to travel through the ages - will be opposed by the Mamluks of Mourad Bey, rescued by Bonaparte, and will become the bodyguards of the emperor.

Timour: Mission to Byzantium - 1962 Charlemagne entrusts a delicate diplomatic mission in Byzantium to Timour to propose a peace with the Sultan in the secrecy of a circle of suspected traitors. A former thief turned squire accompanies him. He constantly evokes the region of Herstal in his native country, Belgium, the native place of the author, Sirius.

Largo Winch: The Heir - 1990 Nero Winch, undisputed boss of the group W, the biggest conglomerate of multinational companies in the world, commits suicide in New York. His proxies look for his only heir, the young Largo Winch all around the world. Largo is then imprisoned in the Selimiye jail in Istanbul, which brings the movie, "Midnight Express," to mind, but was also the place of detention for the filmmaker, Yılmaz Güney, who obtained a Golden Palm for his movie, "Yol" (The Way), at the 1982 Cannes Film Festival.

Vasco: The Byzantine - 1984 After many years of work by Gilles Chaillet, then assistant of Jacques Martin, Vasco was published in its final form in 1984 in Tintin. Vasco, a nephew of a powerful Lombard banker, undertakes several diplomatic missions in the 14th century where we discover the Middle Ages as a time when finance already presided over Western fate.

Saint Sophie's Basilica, without its minarets, has aspects of the monument we know today. Also represented is the serpentine column, one of the most famous offerings of Antiquity, the Tripod of Plataea - offered by the united Greeks to Apollo in Delphi following their victory over the Persians in Plataea on Aug. 27, 479 B.C. on the hippodrome square, has recovered its missing heads.

Corto Maltese: The Golden House of Samarkand - 1986 In this adventure, Corto Maltese starts from Rhodes to go to Pakistan via Turkey in search of the treasure of Alexander the Great. Arriving to Adana in January 1922, he gets into a "medrese," a dervishes' school, where he thinks he can find some help to free his friend, Rasputin, from the prison called the "Golden House of Samarkand." Corto, upon leaving Adana, meets Marianne, an actress who insists on taking him to a shadow theatre performance of Karagöz.
RELATED TOPICS