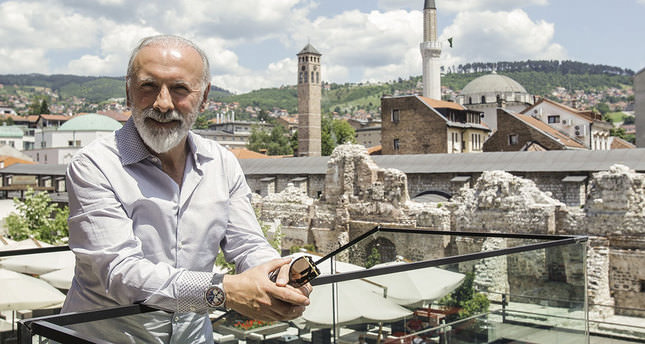 by AA Jul 09, 2014 12:00 am
Indisputably one of the greatest and most popular musicians in Bosnia-Herzegovina and the Balkans, Bosnian singer Dino Merlin entered the Billboard's Top World Albums chart with his latest studio album "Hotel Nacional." He has crowned his musical career with his sensitive personality and outstanding albums. After a six-year break, Merlin's 11th album was released this past June. His new tracks are played on radio, TV and at public venues across the Balkans.

As the most admired Balkan singer, Merlin spoke to Anadolu Agency (AA) about his recent success and newly released album. He expressed his proud sentiments on receiving the eighth rank in Billboard, the prestigious American music magazine with internationally recognized record charts. Merlin learned to play the guitar in his early years, and promised himself to become the best musician he could. "It is beyond question to desire the top position, if you love and do your job properly," he said. It took Merlin six years to finish his new album, featuring some tracks written almost 10 years ago. For him, writing a good song is a big challenge. "My biggest success would be to compose long-lasting songs. I wrote nearly 40 songs for this album. However, I paid particular attention to select the best ones in a timely manner," he said. The Bosnian singer also rejects the claims saying the quality of music was much better at the time of former Yugoslavia. "Today, there are more songs compared to the past. I believe some of them are high quality. However, music arrangers, especially those working in radio have either lost their standards or adopted some bizarre criteria," he said. Merlin described the current trend as kitsch, adding there were fewer songs when he first stepped into the world of music. "This is because there was a lower chance to create poor quality work," he added.

As the first singer from Bosnia-Herzegovina to enter any of the Billboard charts, Merlin is firmly against music copyright infringement. He currently chairs the Sarajevo-based Association of Composers and Musical Creators (AMUS), which has made significant contributions to copyright protection. He believes copyright issues should concern the government as well. "The more states protect our rights, the more the public will respect them. It is not a matter of citizens, but politicians who make laws. There are many countries [that are incapable of] solving the copyright issue," he remarked. Merlin said that Bosnia-Herzegovina also suffers from similar problems. "The AMUS achieved marked progress on music copyright since its foundation and we are in collaboration with Serbia and Croatia as well. Our aim is to allow musicians to earn their living in a proper way," he added.

Until now, Merlin has shared the stage with numerous Turkish singers. He recently worked with Turkish clarinetist Hüsnü Senlendirici on his new album. "People come together somehow. Turkey is a developing country in many aspects with a dynamic society. I frequently go to Turkey and feel myself close to Turkish culture. I hope the country will continue to act as a bridge between the East and West," he said, pointing to the boundless nature of art. Dino Merlin represented Bosnia-Herzegovina at the Eurovision Song Contest in 2011. The renowned musician spends most of his time in Sarajevo's old bazaar, "Bascarjica," which gets its name from the Turkish word "Basçarsı" (Main Bazaar). Merlin currently attends "mukabele" (recitation of the Quran) sessions arranged at the Gazi Hüsrev Bey Mosque before afternoon prayer, every day, during the holy month of Ramadan. He further performs Tarawih, special prayers which are offered every night in Ramadan. Merlin said he does not sleep until "sahoor," the meal eaten before fasting, and chats with his fans at nearby cafes.

A closer look on Dino Merlin

Born on Sept. 12, 1962 in Sarajevo, Edin Dervishalidovic, known by his stage name Dino Merlin, is a renowned Bosnian singer and songwriter. Merlin's musical career started in 1983 when he founded the band Merlin with whom he recorded five albums. Merlin began his solo career in 1991 which created a great impression in the music world in a short period of time. His album "Sredinom," released in 2000, was the top-selling album in six countries that were once part of former Yugoslavia. While many Balkan musicians such as Emir Kusturica and Goran Bregoviç left the region during the 1990s war in Bosnia, Merlin stayed in Sarajevo to give hope with his moving songs. He cemented his status in Bosnian collective consciousness with his song "Da te nije Alija" (If there was not you Alija), written to honor late Bosnia- Herzegovina President Alija Izetbegovic. The audience was greatly moved when he performed the song to 100,000 spectators at Sarajevo's largest stadium, Kosevo. His next album "Burek"" (Pastry) from 2004 features Turkish verses on certain tracks devoted to Sarajevo. Merlin sung his hit song "Supermen" as a guest appearance with Serbian singer Zeljko Joksimovic, who came second in the Eurovision Song Contest in 2004. The famous singer carries out most of his studio recordings in Istanbul.