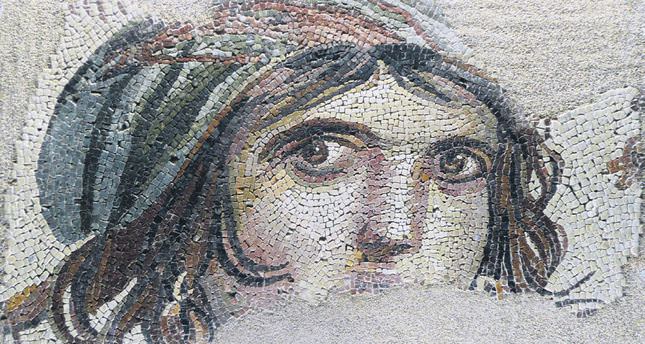 by AA Jul 23, 2014 12:00 am
Turkey, a victim of widespread looting and smuggling of its historical artifacts, should initiate an awareness program to preserve its heritage,
according to an expert.

Creating cultural awareness in primary education is essential to preventing the smuggling of historical artifacts out of Turkey, according to an art history expert. Art historian Emine Özturk, the assistant director of the Zeugma Mosaic Museum recently said, "In this geography that has such a rich cultural heritage, the most important thing is to create cultural awareness.

Thus, museums play a significant role in this respect, they have a role to educate." The Zeugma Mosaic Museum, in the southern Turkish city of Gaziantep, is one of the biggest mosaic museums in the world and has been visited by over half a million tourists since it was officially opened on Sept. 9, 2011. The mosaic known as "Metiokhos and Parthenope" was looted from the Zeugma excavation site in 1993, and later found in the collection of Rice University in Houston, Texas, in the U.S.

It was brought back with the help of the Turkish Ministry of Culture and Tourism. "The mosaic called 'The Marriage of Dionysus to Ariadne' was also smuggled from the excavation site in 1998, and two-third of it is still being looked for by the Interpol," Öztürk told.

Zeugma is a difficult place to prevent looting and smuggling of artifacts since it covers a huge site, yet there are criminal punishments for illegal trafficking, looting, and damaging artifacts, according to Öztürk. Previously smuggled artifacts have been retrieved through court rulings, bilateral relations between states, donations, and through Interpol," she said. However, she pointed to several preventive methods adopted, as well as shortcomings in Turkey. "In order to prevent smuggling, intelligence mechanisms should work very well, monetary and criminal punishments should be increased," she said. "For instance, there are various rewards for those who provide information," Öztürk added.

In 2012, the museum won the Turkish Presidential Culture and Art Reward. The Ministry of Culture and Tourism promotes the museum on an international level, and an application has been made for it to be added to UNESCO's World Heritage list.
RELATED TOPICS