Mahmoud Darwish: "Write down, I am an Arab" 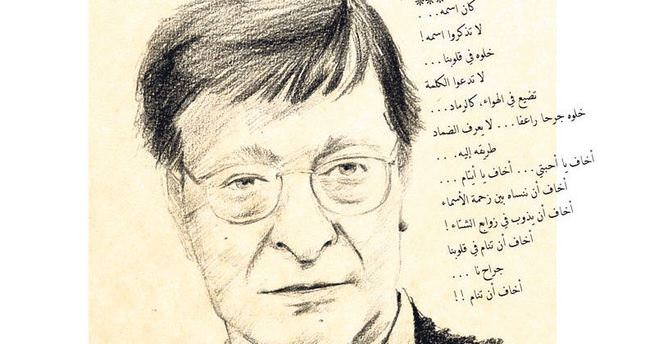 Palestinian poet Mahmoud Derwish, born in the village of Al Birweh that was later occupied by Israel in 1948, was already an activist when he become a teenager, something that regularly got him in trouble with the Israeli Army. He was in prison and exiled for 26 years due to his resistance to the occupation. Mahmoud Darwish persists with his claim through his poetry, where he often addresses the Nakba (the Palestinian exodus in 1948) and the consequent tragedies of the Palestinian people

Moroccan philosopher Abdallah Laroui describes the Arabs' 1967 defeat at the hands of Israel as the beginning of a moral crisis for modern Arab intellectuals. According to the genius of the contemporary Arab thought, modern Arab history can be divided into four major periods.

First was the Nahda movement, a kind of Arab renaissance which dominated the period from 1850 to 1914. Nahda sought Arab modernization in line with the model created by European achievements.

World War I marks the start of the second period, which Laroui describes as "the struggle for independence." This period continued until the 1950s when all Arab countries had gained their independence from Western states.

According to Laroui's scheme, the third period was defined by the unionist movement, which proposed the formation of a united Arab state. Gamal Abdul Nasseer of Egypt was the leader of this movement while the Baath Party in Iraq and Syria were the political body of it.

The fourth of the modern periods of Arab history, according to Laroui, began with the Six-Day War defeat of Egypt, Syria and Jordan by Israel in 1967. Laroui calls this "the moral crisis" that "culminated in a period of anguished self-criticism."

Mahmoud Darwish, a poet in exile who has been referred to as "the national poet," was leading those who helped forge a Palestinian national consciousness after the Six-Day War. Darwish was described as incarnating and reflecting "the tradition of the political poet in Islam, the man of action whose action was poetry." "

Present absentee"
Mahmoud Darwish was born into a Sunni Muslim family on March 13, 1941 in the village of al-Birweh, Palestine. His parents Salim and Houreyya Darwish were wealthy landowners. He learned to read and write from his grandfather. Much like a myriad of other Palestinian families, 1948 was a critical year for the Darwish family. Israeli forces occupied their village and they became refugees overnight.

The Darwish family first fled to Lebanon while the Israeli army razed and destroyed their village in Palestine in order to prevent its original inhabitants from returning to their homes, which was now within the territories of the recently founded Jewish state.

This should have affected little Mahmoud deeply. He later remembered those days with these words: "I remember that period very well, the sea and the banana fields. I was six but I remember it well. My eyes still have memories of those scenes. We were waiting for the war to end in order to return to our villages. My grandfather and father knew that wasn't happening. We snuck back with a Palestinian guide who knew the secret pathways to the north of Galilee. We stayed at a friend's house until we discovered that our village al-Birweh no longer existed."

Meanwhile, the Darwish family moved to Deir al-Asad in northern Israel. In exile, they had missed the Israeli census and became "internal refugees." Their legal status according to Israeli law was "present absentee," meaning that they were physically present, but without papers. Their lands were taken and they lived as refugees.

When he became a teenager, Mahmoud was already an activist. He attended high school in Kafr Yasif and later moved to Haifa. He lived there for 10 years and Israeli authorities did not allow him to leave Haifa.

He did, however, graduate from high school and began work as an editor to the "al-Itihad," an activist Arabic newspaper. He published his first book of poetry when he was just 19, "Wingless Birds." Another volume called "Leaves of Olives" followed this, which he published when he was 22 years old. These were the first two of more than 30 books of poetry by Darwish. He was undoubtedly the most productive poet of modern Arabic.

Later he joined the official Communist Party of Palestine, the Rakah, and began to work as a full-time activist. In late 1960s, Darwish was traveling to villages without permission and reading his political poems to Palestinian people. His "Identity Card" poem was turned into a protest song. This led to him being placed under house arrest for three years, from 1967 to 1970. In 1970, he left for the Soviet Union where he attended the University of Moscow for one year.

Life in Moscow was upsetting for Darwish. He spoke about his experience in Moscow as follows: "I lost my ideals of communism, which made me lose confidence in Marxism. There was a huge gap between what we imagined, the idea portrayed by the Soviet media about Moscow, and the reality that people lived in. The reality was full of deprivation, poverty and fear."

He left Moscow for Cairo where he worked for the "al-Ahram" newspaper. Darwish wrote about Cairo, stating: "Going to Cairo was one of the most important events of my personal life. In Cairo, I was sure of my decision about leaving Palestine and not returning. It wasn't an easy decision. I would wake up from sleep unsure of where I was. I would open the window, and when I would see the Nile I would be sure I'm in Cairo. I had a lot of nightmares, but I was fascinated with being in an Arab city, with Arabic street names, where people spoke Arabic. On top of that, I found myself living between the literary texts that I read and was fascinated with. After all, I'm practically a son of Egyptian culture and Egyptian literature.

I met the writers that I read and whom I considered my spiritual fathers. I met Mohamed Abdel Wahab, Abdel Halim Hafez and others. I met accomplished writers such as Naguib Mahfouz, Yusuf Idris and Tawfiq al-Hakim. In Cairo, I befriended the poets that I loved, Salah Abdel-Sabour, Ahmed Hijazi and Amal Denkul. They were among my closest friends, along with Al-Abnoudi. I grew close with all of the poets and writers that I had loved. Cairo was one of the most important stops of my life."

Subsequently he lived in Beirut where he published "Palestinian Affairs," a newspaper belonging to the Palestine Liberation Organization (PLO), from 1972 to 1981.

Israel banned him from re-entering its territories as the gifted Palestinian poet joined the PLO in 1973. In 1987, Darwish was appointed to the PLO Executive Committee, from which he resigned due to his opposition to the 1993 Oslo Agreement between the PLO and Israel.

Darwish's fame was spreading across the Arab world. When he visited Damascus for a literary event in 1982, the auditorium at the University of
Damascus was not sufficient for the crowd who came to listen to him.

After Israel occupied Beirut, like all other executives of the PLO, Darwish also moved to Tunisia, then to Paris, then to Cyprus where he published the journal "al-Karamel."

Darwish lived in exile for 26 years, between Beirut and Paris, until his return to Israel in 1996, after which he settled in Ramallah, in the West Bank.

Darwish died on Aug. 9, 2008, in Houston, TX, after complications from heart surgery.

Darwish's poetry is simple but eloquent. His mood is pessimistic to some extent. He reflected the vision of defeat and disaster, which made his poetry a symbol of Palestinian national consciousness. He often addressed the Nakba (the Palestinian exodus in 1948) and the consequent tragedies of the Palestinian people. He reflected many movements such as the Israeli invasion of Lebanon in 1982 and the first intifada in 1987. He was an identity poet. He used the word "watan" (homeland, Palestine) with such strong and deep feelings that he was called "the essential breath of Palestine."