Discovering a secret world in public at Rampa Gallery 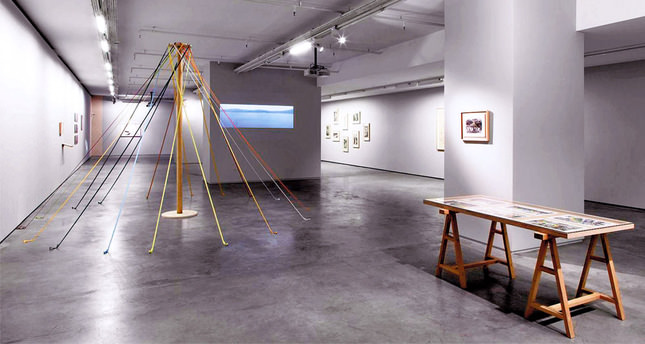 Fans of "Frances Ha" will remember the scene where the film's eponymous protagonist gives an impassioned and mildly goofy speech about experiencing a very unique, and personal moment, while in public. "It's that thing when you're with someone and you love them and they know about it, and they love you and you know it," she says. "But it's a party, and you're both talking to other people, and you're laughing and shining, and you look across the room and catch each other's eyes." In that moment of epiphany, the protagonist muses about discovering "this secret world that exists right there in public, unnoticed, that no one else knows about."

This fleeting moment has the transformative potential of love, and so do the artworks exhibited in the Rampa exhibition. They may create a similar sense of dizziness, one that we experience while falling in love. Otto Berchem's "We Are The Revolution [Maypole]" dominates the gallery with its tent-like structure, and seems like part of a religious ritual, or a social protest movement, in which the viewer is invited to participate.

"Berchem's work has a central physical existence in the exhibition," Lara Fresko said as we walked through the gallery. Fresko has co-curated the exhibition with Esra Sarıgedik Öktem and was getting ready to leave Istanbul for the U.S., where she will pursue a doctorate degree at Cornell University this Fall.

"The maypole pulls you in as you approach the exhibition," she said. "It is an object of European traditional rituals that has come to mean many different things from reverence for sacred trees to fertility. One thing that remains constant is its social component whereby a community has to come together in order to weave its threads around its pole."

The colors of these threads come from interventions the artist has made on archival photographs of protest events, which are also displayed in the exhibition. "I'm reluctant to say that it's the central work, because I think all works act as central ones in different respects. But still, it does embody the gestural choreography, the formal abstraction, and the political communalism that runs through other works in the exhibition," Fresko said.

The circular motion of the maypole choreography is echoed in Iz Öztat's video work "Constituting an Island" in which an imaginary island is realized by the Romanian national rowing team rowing around a circular space on the Danube. "Geography is very much an abstraction in this exhibition, and a central one at that," Fresko said. "Recently I read a piece by David Harvey, where he says something like 'you can't draw a map to represent something and not misrepresent it at the same time.' It's more about a space that one creates by walking it, or rowing it in the case of Öztat's work." There are other works in the exhibition that use maps, such as Francis Alys's"The Loop" and Hüseyin Bahri Alptekin's "Keraban Le Tetu."

These two works have a similar premise of going the long way around to get from one place to another. "While Francis Alys travels all around the Pacific to get from Tijuana to San Diego without crossing the Mexico-U.S. border, Alptekin traces Jules Verne's story of a stubborn tobacco merchant who travels around the black sea in order not to pay tax to cross the Bosphorus. These works are as much about alternatives and possibilities as they are about borders and limitations," Fresko explained. "Alptekin had hoped to re-enact Keraban's route with a group of artists and art professionals in a project he playfully named the Sea Elephant Travel Agency. "Alptekin wanted for the art community in Turkey to communicate with their northern neighbors," Fresko said.

My favorite work in the exhibition is Yasemin Özcan's 1997 installation "Soap Opera Synopses." Featuring synopses of "Generations," "The Young and the Restless" and "The Bold and the Beautiful," the three major soap operas that have dominated my childhood throughout late 80s and early 90s, it is a creepy work that plays the theme music of soap operas, as if to remind me of all the hours I've spent watching those crappy shows. Berat Isık's videos, "Butterfly Effect" and "Falling" are also gripping as two meditations on human breath and its transformative potential.

As we came full circle and reached the entrance, Fresko looked at the LCD screen again. "The scene from Frances Ha captures the idea we had in a very poetic way, enacting the very fleeting nature of alternative visions," she said. "I actually have to watch that segment once in a while to refresh my memory as to why it's so captivating and encapsulating. I think part of its charm is that it's full of hope, and that this hope is based on a single look that is shared by two people."

Until Saturday, 11.00-19.00 at Rampa Gallery, Sair Nedim Street no: 21a Akaretler Istanbul, www.rampaistanbul.com