'It is beautiful that languages are diverse and cultures are colorful' 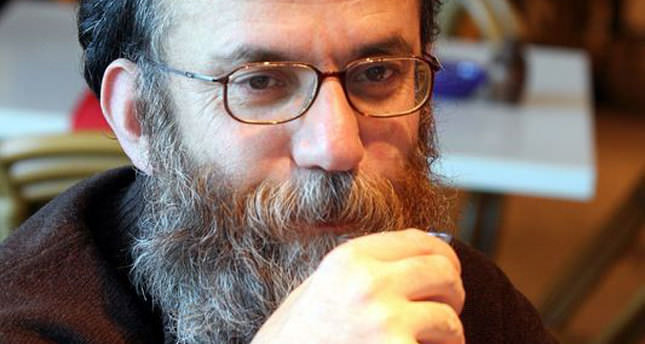 Turkish poet Haydar Ergülen is one of the leading names of the Turkish loyalty generation, who adopted various aspects from cultures that flourished in Anatolia. 'Childhood would perish unless poems existed,' he has said. Ergülen compares poems to a journey and seeks a special stage - becoming a 'dervish poet.' Daily Sabah explored Ergülen's journey toward the depths of the poetic world

Özkan Binol: Haşmet Babaoğlu once said, "When our lives are far from poems, our minds become stagnant. So what disappears if poetry does not exist?

Haydar Ergülen: Poems are intertwined with our lives; they are something that we carry in our hearts. Poets exist with poems. Some of us are indifferent [to them]. Therefore, we borrow their poems and write them down. I always say I write on behalf of someone else. When people ask about it, I say I am not writing on behalf of another poet, but someone else who is either able to write it down or not. Poems are intrinsic to human nature, they belong to us, [and] they exist. If there were not any poems, our childhood and traditional values would perish. We could not protect them without their existence. I believe we may even lose half of our lives. Most importantly, we would lose our childhood. I tell young people that literature and poetry are not the same. In other words, you do not like [poems] because poetry is not similar to literature.
Do not consider poetry boring, they are in your pocket.


ÖB: How do you find Turkish people's relation to poetry?

HE: When people lose their childish soul, poetry disappears from their lives. They think there is no place for poetry under current life conditions. They start to underestimate poetry because they do not take themselves seriously. When we have jobs, one's entire life focuses on earning money. However, the feeling of rivalry does not exist in poetry. People assume that poems are only what they read, listen and comprehend, nothing more. However, real poems exist in childhood, but they are lost as we grow up. Considering those who write poems, even they are not professional - there is a tradition of wisdom that emerges in our Eastern-style society with the arrival of the Quran. We are familiar with such traditions. Poetry lives in our hearts like an inner voice. When we begin to work, we lose it. If we follow, we can continue to read poems, even if we do not want to write.


ÖB: What stage have you reached in your life?

HE: I have reached the stage that we are talking about. When you reach your middle ages, people generally say you become relaxed. I am feeling the same. I have written 15 books so far and my poems will be collected into a book. But every time I hold a pencil, I ask myself whether I can finish this or not. I always write my poems as if I am writing for the first time. This feeling is what makes me stay alive. I write my poems as if I am setting off on a journey and get curious about what I am going to write. Poetry is the main reason to get under way.


ÖB: How do you think poetry will continue its journey in the future?

HE: I like to read the works of master poets such as İlhan Berk and Fazıl Husnu Dağlarca - may they rest in peace. I closely knew them; they used to read even the poems of young poets in their 20s. Sometimes, my phone used to ring early in the morning - İlhan Berk was calling me. I excitedly held the receiver as if he was going to tell some bad news. He would politely say, "Haydar, good morning. Are you still sleeping?"

Then he would ask, "Have you read this poem, have you heard that poet?" He was living in Bodrum and used to get up early to read all the literary magazines. If he liked a few lines, he would immediately call me to share it. He never gave up poetry even though he was 90 years old. Dağlarca was similar to him. He always got excited if he liked a poem or read young poets' work. If they felt such great enthusiasm in their old age, we should share their excitement. This is because there is no need to despair the future of poetry and poetry in Turkish.


ÖB: If you get on a "wooden train," where would you like to go?

HE: All trains pass through the city of Eskişehir and all journeys end there. There is even a slogan that says: "Eskişehir is the heart of Turkey." I was born and raised there. Eskişehir is still quiet and sustains its historical cosmopolitan look. No one looks down on others due to their language or religion. There is a high immigrant population. If immigrants are many, there must be a hybrid society. While Tatars compose a significant part of the population, Alevis are less. Over the years, Kurds and Romani have settled there. I always look for similar feelings when I go somewhere else.
The hybrid structure is what gives peace to its residents. Eskişehir is a utopic city for me.


Ö.B.: Imagine that a postman brings you an envelope. What would like you see in it?


ÖB: You say, "I am not a dervish," in one of your works. Don't you think there is a dervish in the soul of every poet?

HE:Poets are more argumentative than authors. You may not see a debate between authors, but you can see poets in conflicts similar to those between sailors every year. I do not favor conflict in either life or poetry. I wish everyone could write down their own poems that are kept in their innermost parts. They might be good or bad. There is no need to argue against its quality. I am criticized due to my dervish nature. What I say is that "dervishism" is a position. Dervishes set off on a journey to the inner world. I wish we could be dervish poets.


ÖB: In another poem you say, "I do not care about death, I am not a poet." Who are you if you are not a poet?

HE: One day, Berk asked me to write poems about death. I stared at him and he laughed at me. I asked, "Why did you laugh at me?" He said, "You presumably compare yourself with me now and ask why you do not write it." Indeed, Berk was 30 years older than me. He later said, "I am going to write as well." Turkey was living its darkest days when we had this chat. It must have been between 1993 and 1996 when Mehmet Ağar was the head of the Turkish National Police. Continuous extrajudicial killings were witnessed. Death was all around, sudden attacks followed each other. I thought, "If we die now, it will be a homicide." I did not want to be killed by someone else, but die due to a normal reason such as an illness. I wrote my book "Ölüm Bir Skandal" (Death is a Scandal). Everyone dies, but poets write poems about death. It was a difficult situation. İlhan left a strong impression on me.


ÖB: Is your mother tongue poetry?

HE:I have a favorite saying by Jorge Saramago. He says, "Childhood is the homeland." I think poetry is also our homeland. Yes, my mother tongue is poetry.


ÖB: What do you think about the minorities who want to speak their own language?

HE: Well, I support them. To give an example, there are only two people in their 80s, who can speak an almost extinct Latin American language. However, they are at odds and do not speak to each other. Can you imagine this?

There is a very small community whose language is spoken by only two people. The language ultimately perishes. There was once only one person left who could speak Ubykh [an extinct Caucasian language]. He was residing in Turkey. Fortunately, a documentarian made a film about him. It is beautiful that languages are diverse and cultures are colorful. They are a part of [our] cultural richness. I do not understand why people live in fear of speaking their mother tongue.


ÖB: Why are poetry books sold less than others?

HE: Poetry books are generally sold less around the world. I might even claim they are sold more in Turkey. There are almost 10 poets whose books are preferred by readers. During my adolescent period (in the 1970s), I used to buy poetry books in Beyazıt's Sahaflar Bazaar [a second-hand book bazaar] when I visited Istanbul. At those times, Can Yücel and İlhan Berk's books cost 25 kuruş. The books of renowned Turkish poets were published at small publishing houses with limited copies. Only those interested used to buy them. I still remember Cemal Sürreyya's happiness when he saw the third edition of his [book] "Üvercinka". When the culture industry emerged after the 1980s, the collected works of poets took their place on bookshelves.
Last Update: Aug 12, 2014 1:59 am
RELATED TOPICS