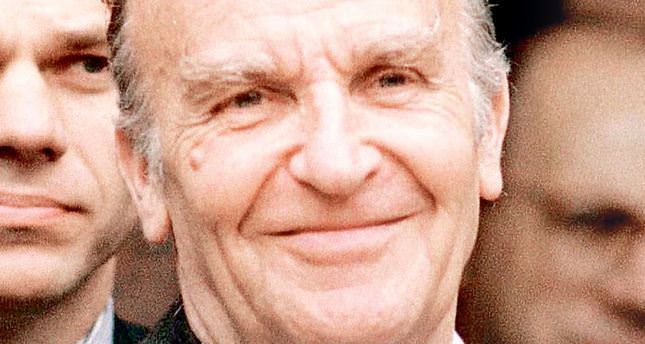 by Hakan Arslanbenzer Aug 16, 2014 12:00 am
The ancient Greek philosopher Plato dreamed of a utopic state ruled by philosophers. In his well-known book "The Republic," he uses the ship metaphor for the ruling of the state and writes, "Don't you think that the true captain will be called a real stargazer, a babbler, and a good-for-nothing by those who sail in ships governed in that way?" Therefore, the ideal ruler should be a philosopher.

Whether or not Plato was right, the history of state ruling has not shown many examples of philosopher kings. The Roman Emperor Marcus Aurelius is the most famous one of this type. Aurelius ruled Rome for 19 years while he was one the most prominent Stoic philosophers. King of Hungary and Croatia Matthius Corvinus, who lived in the 15th century, was another, yet less known example. Corvinus strongly endeavored to follow the model and ideas of the philosopher- king as described.

Some readers might oppose that I used the word "king" for Alija Izetbegovic since he had a deep and honest respect for democratic values. He never posed like a king or a war hero, though he had good reason. Alija Izetbegovic acted in politics as the voice of his people, the Muslim Bosniaks. "King" is just a metaphor here. Izetbegovic never used methods other than the democracy he was allowed to use. His philosophy and politics depended upon a combination of the universal acquisitions of Western civilization and Islam, which directly reflected his people's position - a Muslim nation in Europe.

Alija Izetbegovic was born on Aug. 8, 1925 in Bosanski Samac a town located in the north of Bosnia. He was one of five children born to a distinguished but impoverished family who had descended from former Bosniak Ottoman aristocrats of Belgrade, who fled to Bosnia in 1868 after Serbia won independence from the Ottoman Empire. His grandfather, also named Alija, was the mayor of Bosanski Samac While his grandfather was a soldier in Üsküdar, Istanbul, he married a Turkish woman, Sıdıka Hanım. The couple moved to Samac and had five children. His father was an accountant, but unfortunately went bankrupt in 1927, and the family moved to Sarajevo the next year. With a devoted family and Muslim upbringing, he received a secular education.

As a teenager Izetbegovic joined the Islamic organization Mladi Muslimani (Young Muslims) when Bosnia was part of the so-called "Independent State of Croatia," which was fully under the control of Nazi Germany during World War II.

In the war years, three major forces clashed for the control of the territory that would become communist Yugoslavia after the war: the partisans of Marshall Josip Broz Tito, the nationalist Serbs and Nazi collaborators. Mladi Muslimani was a small group demanding Muslim rights. They were neither Nazi collaborators nor communists. Their point of view was Islam as the third way, which Alija Izetbegovic would develop more in such fascinating texts as "The Islamic Declaration" and "Islam between East and West."

The newly founded communist regime of Yugoslavia arrested the members of Mladi Muslimani in 1946, and as a teenager, Izetbegovic was among them. He was sentenced to three years in prison on charges of not obeying the communist regime, which he would never obey. Before serving his sentence he earned a bachelor's degree from the Law School of Sarajevo University.

In his memoir "Inescapable Questions," published in English in 2003, he mentions his short-cut childhood: "My childhood now seems too far. I can only see general lines instead of details like I'm gazing at mountains under an open sky." The war of everyone against everyone in the Balkans cut many people's childhoods short just like the people in other regions like the Middle East and the Caucasus. Izetbegovic spent a full life in politics and war against the oppressors of his Bosniak people. He was just 16 when he joined Mladi Muslimani where he continued working until the organization was declared illegal by Tito and its members were imprisoned.

The Young Muslims were trying to save their Muslim identity through political activism and also live their private lives. Izetbegovic married four times and had three children during his lifetime. He was a lawyer, a political activist, later a legal politician, head commander of Bosnia under Serbian siege, and author of few but strong books of multi-disciplinary views on Islam and Muslims in the modern world. "Islamic Declaration" was published in Sarajevo in 1970. This was a manifestation of the demand of connecting Bosniaks to their Islamic roots. It was a call for Muslims to be right Muslims. Muslims should have their own state.

The communist authority was frightened of the views Izetbegovic offered in this book so they banned its publication. "Islamic Declaration" was always used against Izetbegovic and Bosniaks. It became somehow a justification for Tito to imprison Izetbegovic in 1983, and for such Serbian racist nationalists as Radovan Karadzic and Ratko Mladic to command the Bosnian genocide in the 1990s. Izetbegovic himself refused the "fundamentalist" accusation until the end of his life. Indeed, accusing Izetbegovic with fundamentalism is just a deduction ignoring his complete works and personal history of political action.

After Alija Izetbegovic served another five years in prison, the communist regime in Yugoslavia declined in 1988, and two years later Izetbegovic was elected president of Bosnia. However, ethnic tensions were heated in Yugoslavia, which led Croatia and Slovenia to declare independence. And in Bosnia, Serbian and Croatian nationalists left the united government and acted on their own. The war was at hand, and the most disadvantageous group of nations was the Bosniaks.

In a government meeting, which can now be watched on Youtube and other video sharing sites, "The Butcher of Bosnia" Radovan Karadzic threatened Izetbegovic saying, "The war is at hand, and the Muslims cannot survive when the war breaks out. We will destroy all of them." Izetbegovic did not display any affect against this genocidal threat, and when his turn came, he simply took the microphone and said, "We want peace, not war. But the Muslims can and will survive any war." His speech, like many other of his speeches, was applauded by the majority.
Bosnian genocide and beyond Bosnian Serbs were the best organized group with the best equipment of all the Bosnian nations.

They attacked Bosniaks and Croatians with every means they had. The Serbian techniques of killing, torture, rape, imprisonment, deportation, gathering people in concentration camps and putting cities and towns under siege showed an apparent mentality of genocide. Some politicians accused Izetbegovic of putting his people under the worsening conditions. Yet, this was nonsense since the Bosnian genocide conducted by Serbs was a planned and organized series of crimes, not a mere accidental incident. During the war years, Izetbegovic stood tall representing his people at every phase and stage with the highest honor and philosophical seriousness. His speeches at cease-fire negotiations and peace meetings have been recorded in history. Izetbegovic was right after all.

The Bosniaks survived the war and their butchers Mladic and Karadzic were chased. Bosnia received a post-war restoration funding and made a great recovery, though the political organization of the state was now more complicated than that of the prewar era. Nonetheless, the worst peace is better than any kind of genocide. Alija Ali Izetbegovic stepped down from the presidency in 2000 when he was 74 years old for "health reasons." Yet, the Bosnian people continued to call him "Dedo" (grandfather in Bosnian).

The hero of the Bosniak nation died in 2003 of heart disease. His funeral, under a heavy rain, was the most crowded event ever in Bosnia. His loyal and humble people buried him in the cemetery of martyrs of the Serbian war. He rests there now hand-in-hand with the victims of the genocide. As for Bosnia and its Muslim nation, they survive.
Last Update: Aug 16, 2014 2:17 am
RELATED TOPICS