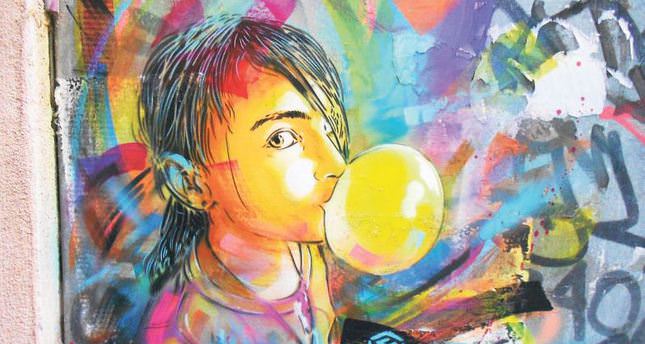 Curated by Roxane Ayral, Pera Museum's 'Language of the Wall: Graffiti and Street Art' exhibition features works by 20 graffiti artists from five countries. The show offers surprises inside the museum and on Istanbul's streets

The elevator that brings visitors to the fifth floor of Pera Museum has lots of graffiti on it. You would be forgiven for wondering how people managed to get inside the museum building and to spray their graffiti on its elevators, but when the doors open and you see the name of the exhibition, it begins to make sense. "Language of the Wall: Graffiti and Street Art" exemplifies a passionate devotion to the fundamental principles of street art, which begins on the museum building and its elevators.

Curated by Roxane Ayral, the show is easily the most impressive I've ever visited in Pera Museum, where the works by 20 graffiti artists from five countries are displayed on three floors. I had modest expectations from the show, and was ready to see a collection of photographs of street art hung on its white walls. I knew I was wrong when I saw the paint sprayed on the floor, and entered a special reconstruction resembling a catacomb with graffiti-covered walls.

In the exhibition catalogue Ayral invites visitors to "imagine an art form that utilizes all the streets in the world as its medium and where its form of expression is derived from the essence of the streets." The main question of the show is whether it is possible to confine this art form within walls of an art institution.

That the Pera Museum houses Osman Hamdi Bey's "The Tortoise Trainer" (one of the most expensive paintings in Turkey) just a few floors below examples of street art by 26 year old artist Atakan "Funk" Özdemir, among many others, is pretty cool. But the show offers more than provocation against the art establishment, and does a good job at providing information about the roots of graffiti culture.

After the economic crises in the 1970s, New York's Hispanic and black minorities had increasingly expressed their needs, dreams and thoughts through this medium. They went further and redefined themselves in a culture that discriminated against its minorities, with the result that those lacking proper credentials had a difficult time surviving.

Ayral has lived in Turkey since 2010 but it was not until 2012 that she contacted Pera Museum to pitch this show. "They opened their doors to me despite the boldness of my proposal," she told me. "It took me around three years to create the show in its current form and much changed from my initial proposal."

When she was 14, Ayral lived in Nice, and spent most of her time skating on the streets. This was how she first came across France's vibrant street art tradition. She bought graffiti magazines and learned about the leading artists in the field. "I never had the impulse to do graffiti myself," she said. "But inhabiting their world changed me dramatically, in the same way it changes the lives of graffiti artists themselves."

Just a short walk in Beyoglu is enough to show Istanbul's bourgeoning graffiti scene, and I wondered how it compares to other cities. "Local artists are doing a great job on trains and on the streets, but I can't compare Turkey's graffiti scene to New York or Paris," Ayral said. "Nevertheless I am sure the graffiti scene here will gradually gain an international reputation." Ayral's favorite graffiti neighborhoods in Istanbul are Taksim and Karaköy. "Istanbul is such a massive city, and I am sure there are numerous other neighborhoods where you find great graffiti in the most unexpected places," she said. "I hope that graffiti works spread to more central neighborhoods since I don't want to take a single step in this city without seeing graffiti on its walls."

Pera Museum worked with Besiktas and Beyoglu municipalities so that its graffiti artists were allowed to paint façades of Istanbul's buildings. "Most of the artists who worked with us had come to the city for the first time. It was important for them to leave their mark on Istanbul. As for the visitors, we wanted them to understand how the museum shows only a small portion of street art, by way of not confining graffiti inside the walls of Pera Museum."

So what will happen after the exhibition closes on October 5? "All those works were produced here, for this show," Ayral said. "We respect the transient nature of street art. Graffiti is often an unobtainable, uncontrollable, and free art form. The works on display in the museum will be erased after the show but the experience of seeing them will endure."