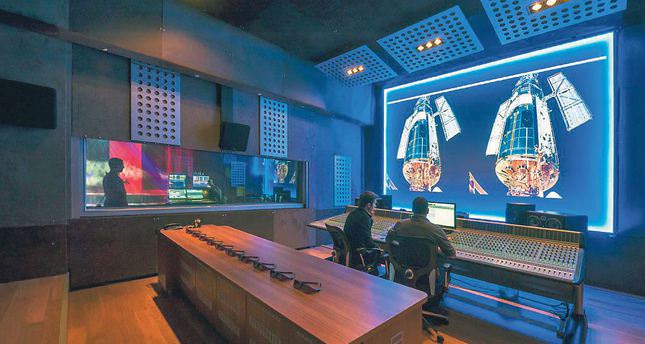 The Istanbul Media Academy, which focuses on cinema, TV, media, acting training and education, is launching a joint program with The New York Film Academy, and is offering a technical and creative workshop for students in Istanbul

With its production consulting services and TV projects, the Istanbul Media Academy, as a production center, is endeavoring to train exclusive media personnel, including their students.

With the motto "New Media Center of New Turkey," the institution offers a number of theoretical and practical courses from professional English, TV presenting and production training.

Spreading over 2,000-square-meters, the Istanbul Media Academy will be a giant media center with two main studios, a recording studio and one of Turkey's largest green box studios. Equipped with state of the art technology, the studios allow students to practice with real-life TV programs.
The successful participants will be given a certificate approved by Turkey's Ministry of Education (MEB). Chairman of the Board Ogün Sanlıer described the institution as a prestigious production center that intends to train distinguished media professionals for the future in an interactive platform. "Istanbul Media Academy trains students under suitable working conditions and professional broadcasting principles," Sanlıer said, pointing to the institution's "quality" perspective. "We appreciate humankind and are aware of the importance of investments in human resources.
Fresh generations educated by unspoiled media are the guarantees of a bright future," he continued.

As for job opportunities, MEB-approved certificates give students the chance to seek employment at established media institutions. "Successful students can work at international TV channels, film and TV series and the institution's own productions,"Sanlıer said. The academy will conclude an agreement with the Turkish Labor Agency (ISKUR) to open the way for the media industry.

Their principal aim is to place accomplished students in the institution's own production projects.The mission of the Istanbul Media Academy is not limited to those mentioned above. As a part of an indispensable strategy for national development, it is working on the Turkish film industry and aiming to improve media work life with creative collaborations. The institution aims to contribute to regional development and change the wrong perceptions of Turkish media abroad. "We will organize seminar programs exclusively for media professionals from Western countries which will offer courses in Turkey's foreign policy, news resources and Islam in Turkey. Our institution will work to reverse undesirable perceptions of foreign media circles in line with a new media concept,"Sanlıer added. The center will apparently lay the foundations of a new media that contributes not only to regional development, but also global peace. The New York Film Academy (NYFA), having hosted names like Steven Spielberg and Kevin Spacey is collaborating this year with the Istanbul Media Academy with all its components and educators, thus signing a major partnership.
NYFA will organize many cinema-based workshops at the Istanbul Media Academy with its own programs and educators.