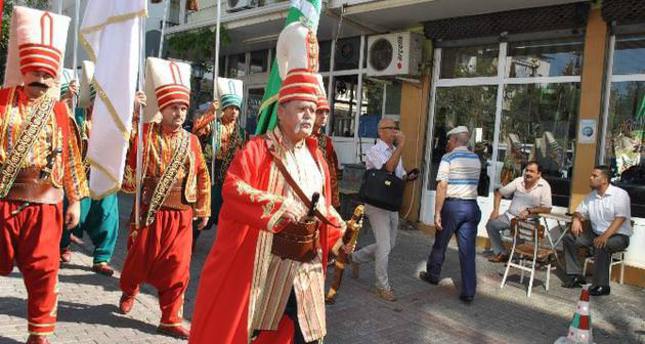 by Daily Sabah Sep 25, 2014 12:00 am
Organized by the Istanbul Chamber of Commerce (İTO), the 27th "Ahilik Culture Week" events will continue to jazz up Eminönü until Sept. 26. Ahilik is an artisan, craftsman and producer's guild founded by Turks in Anatolia, the Balkans and Crimea. The importance of moral, political, economic and philosophical principles of Ahilik is emphasized during the events. The Emperor's Palace in New Mosque (Yeni Camii), which was granted the EU Prize for Cultural Heritage Europa Nostra Award, is hosting the Ahilik Culture Week event. "Emperors' palaces" are Ottoman structures located in mosques and state buildings where emperors would listen to sermons and ceremonies and meet with people, listen to their needs and complaints. The palace in New Mosque was built by Turhan Hatice Sultana in 1663. During the week, Ottoman traditional arts such as marbling, lithography, ceramic glazes and glass, leather making and silk knitting are being presented in the sections located under the palace in line with the theme of "Unforgettable Professions." Visitors are welcome to participate in arts and craft performances at Ahilik Street free of charge. Moreover, visitors can tour the 400-year-old palace, which is decorated with Ottoman ceramic glaze, and visit the museum for free. Ahilik Foundation Vice President Duran Demirbaş said the revenue acquired from the sale of these crafts will be awarded as scholarships to Ahilik Foundation students. He highlighted that participants of Ahilik Culture Week are contributing to the education of students and added Ahilik Foundation gives scholarships to 100 students.