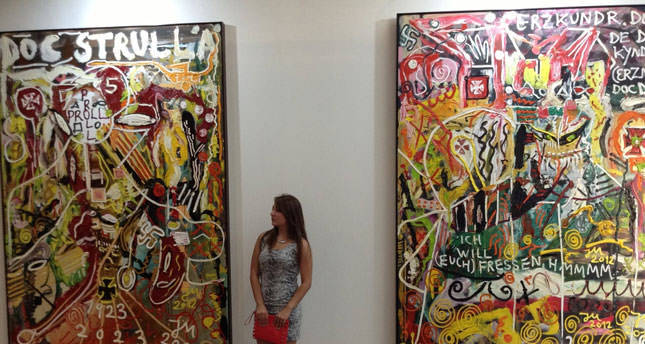 by Daily Sabah Sep 25, 2014 12:00 am
The program for the second annual ArtInternational Fair is sure to leave you breathless. The art fair will take place from Sept. 26-28 at the Haliç Congress Center and will showcase the most distinguished artwork of 80 art galleries from 24 different countries. This year's ArtInternational will turn art lovers' heads by exhibiting the works of some of the most important names in contemporary art along with speeches, installation arts, performance video arts and artistic performances. Regarded as one of the leading contemporary artists with his landmark works exhibited in many cities around the world, Anish Kapoor is one of the most important guests of the event. Two of Kapoor's 2013 works can be seen at the fair, and his works were exhibited at the Sakıp Sabancı Museum last year. In addition to Kapoor's works, the works of David Hockney, one of the most important representatives of pop art, will be exhibited, along with the works of groundbreaking artist Andy Warhol, which will be exhibited at the Andipa stand. This year, art devotees will get the chance to see works of the iconic artists of the contemporary art including "Guerrilla artist" Banksy, who is known for his controversial, anti-establishment wall paintings, and Damien Hirst, one of the most important representatives of the Young British Artists group. World-renowned Catalan painter and sculpture Joan Miro's exhibition is among the favorites of the fair. His works will be displayed at LeLong, one Paris' prestigious art galleries, and his two-meter tall sculpture named "Statue" will be placed at the terrace of Haliç Congress Center in the "By the Waterside" section. Sculptor Jaume Plensa will also be exhibited in the same section as Miro with his sculpture named "Triptych." The sculpture is a meditating human figure that is comprised of letters. Chinese Liu Bolin, also known as "the Invisible Man," is among the most colorful artists of ArtInternational, and will perform for the first time in Turkey. Bolin is famous with drawing the background patterns on his body to camouflage himself.