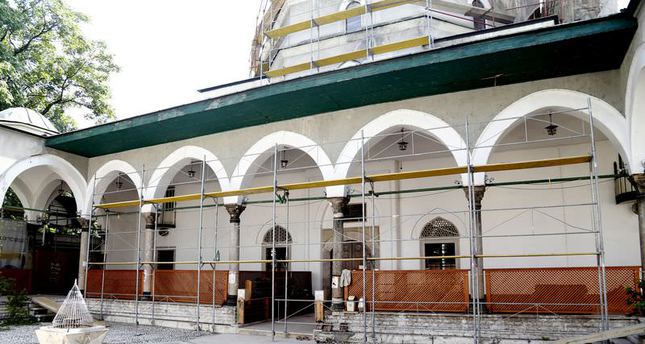 by Daily Sabah Sep 25, 2014 12:00 am
The Emperor's Mosque in Sarajevo was built by Isa-Beg Isakovic, the Ottoman Empire's first governor of Bosnia and founder of Sarajevo in the mid-15th century. The mosque, which was named after Mehmed the Conqueror, was targeted many times during wars throughout history. During the Bosnian War from 1992-1995, the mosque was badly damaged. In order to repair the mosque, the Turkish Cooperation and Coordination Agency (TİKA) launched a thorough restoration project.

The restorations will include renewing and repairing the mosque's electric wiring, floor heating, exterior front, minaret, water and sewage systems, toilets, roof, landscaping and many other parts. Hafız İşeriç, imam of the Emperor's Mosque, provided information about the mosque's history, and said, "This place is the center of Sarajevo; in other words, the birthplace of the city." He said that the original mosque built by Isa-Beg Isakovic was much smaller compared to the current mosque. He said that the original mosque was damaged in a fire sometime in the 15th century, and gained its current form after the restoration in 1565. İşeriç also said that the mosque was built as a symbol of the city, adding that the building is not only the most important building in Sarajevo, but also in Bosnia and Herzegovina. He then thanked TİKA and the Republic of Turkey for undertaking the restoration of the mosque.

Throughout its history, authorization ceremonies of Bosnia and Herzegovina's chief ulamas took place at the Emperor's Mosque. The Mosque in Sarajevo was targeted twice during the Bosnian War and the roof began to leak due to damage. The historic Emperor's Mosque is under state preservation as a cultural heritage.