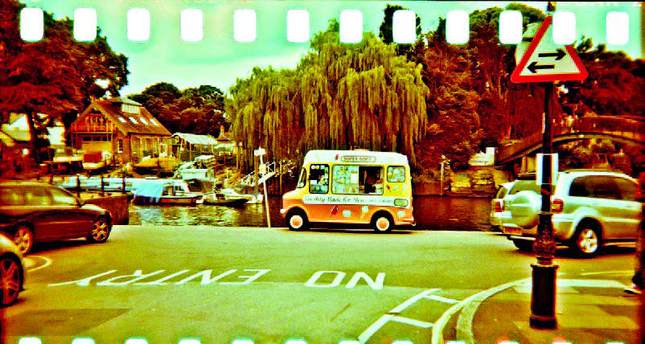 by Handan Kazancı Oct 03, 2014 12:00 am
Wolfgang Stranziger and Matthias Fiegl, the founders of Lomographic Society International - a group that brings together Lomo-lovers and shutterbugs - first set eyes on the Russian-made Lomo Compact Automat in Prague in 1991. Lomography, photography that utilizes an easy-to-use analogue camera, attracts users for its vibrant color photography and experimental developing.

The technique allows Lomo users the freedom to alter both the film and developing process; some even use bleach, wine, cough syrup or pickle juice to achieve unexpected and startling results. The camera - originally a copy of a Japanese Cosina CX-2 - was mass produced in 1984 in St. Petersburg by LOMO, the Leningrad Optical Mechanical Association, a manufacturer that used advanced lenses at the heart of the camera to produce lively color results. Today, the device is produced in China.

"Having a flaw makes it different from the others," says the general director of Lomography Istanbul, Nural Idrisoglu, referring to light leaks and blurring as a result of the camera's cheap plastic body.

A former human resources employee, Idrisoglu, 30, got her first Lomo in 2006, and since then she has been immersed in the world of Lomography. Founded in 1991, not long after Stranziger and Fiegl discovered their Lomo camera in Prague, the community released its "10 Golden Rules" a year later.

These rules included insights such as "don't think too much about the shot," "be quick," "take your camera everywhere" and "use it any time, day and night." "I fell in love with the tenth golden rule of Lomography: 'Don't worry about any rules,'" said 20-year-old business management student Seda Akay, in Graz, Austria.

Lomography has attracted more and more attention from the photography world after Stranziger and Fiegl held major exhibitions of pictures taken with Lomo cameras in New York and Moscow. Until 2005, the duo regularly visited Russia, brining back bags of Lomo cameras to Vienna. After their exhibitions' success, they ended up signing a contract to ease tax regulations for them with the LOMO company with the help of Vladimir Putin, the then vice mayor of St. Petersburg. For 21-year-old Istanbul law student Ruya Tuna, Lomography means, "being carefree and playful." "As for the 'no rules' motto, that comes from people who got sick of being told what they wanted to shoot was wrong," says Tuna, who encountered Lomography five years ago. "Lomography became a safe haven for them, for all of us, and that's why it is so popular," she adds. Akay also explains the difference between a digital camera and a Lomo camera. "While using digitals, you have got to be aware of your light and composition, and take time to make adjustments to the camera; it takes more time. By using Lomography, you can shoot without even using the viewfinder, without thinking twice about it."

Lomographers feel much more attached to their creations than the millions of smartphone users who routinely delete entire albums. "You care a lot about every single photo you share! I recently deleted 1,500 photos that I [had taken] with my smartphone and I was not so sad at all. However, if something happened to a quarter of my films, I don't know how I could recover," said 26-year-old Turkish designer Eray Alan, currently living in Milan.

As one of the rules of Lomography is 'try the shot from the hip,' Lomo-lovers don't even need to look through the [viewfinder] and must be ready for any experience, Idrisoglu said. Lomography is "never-ending rule-breaking," according to Alan, who is one of the people who set up the Turkish Lomography Community in 2011. "Lomography is breaking down the 'known' rules of photography by setting new rules and breaking its own rules again," he added. A Lomographer at heart, Alan encountered the technology as a brand four years ago, but he has been shooting Lomo-style photos since he was 13. "We call it creative and experimental analogue photography," said Idrisoglu, as Lomo-users rely on film rolls unlike digital cameras that use data cards. Although modern-day digital cameras make it possible to take thousands of pictures and allow shutterbugs to see the results immediately, Lomography attracts many for its surprising results. The final images change according to the camera or the film rolls you use.

"You can do everything with your Lomo; I remember once I placed my film rolls in cough syrup for different results," Akay said. "You can create your own background and then combine it with reality," Akay added. "When you go to holiday, you have to wait to have your snaps processed which creates more anticipation," said Idrisoglu. Owning a Lomo is not expensive either; prices range from TL 120 ($52) to TL 1,200 ($528), according to Idrisoglu. For its users, Lomography is not only a brand name, but a community that brings together more than one million users worldwide and around 6,000 enthusiasts in Turkey. With its colorful and pure retro-kitsch appeal, Lomography is certain to attract more.