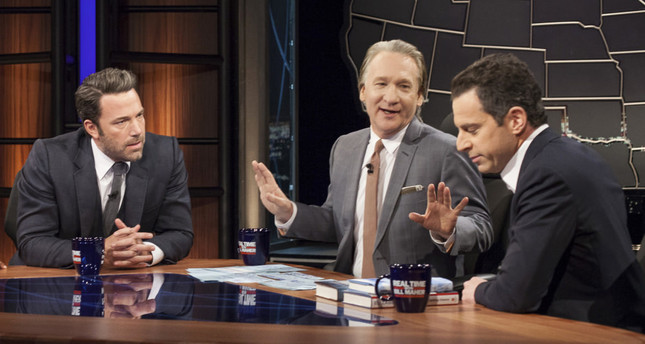 by Zeynep Esra İstanbullu Oct 09, 2014 12:00 am
On Oct. 3, famous actor and director Ben Affleck was the guest of TV show, "Real Time with Bill Maher." Bill Maher likened Islam to a mafia, claiming that it kills you when you try to question and abandon it. Furthermore, another guest of Maher's, author Sam Harris, said that Islam includes bad ideas. Upon these Islamophobic expressions and unjust generalizations of Muslims, Ben Affleck suggested that what they were talking about Islam was racist. He said that it was not right to generalize the entire Islamic world based on a few bad examples. "How about more than a billion people who aren't fanatical, who don't punch women, who just want to go to school, have some sandwiches, pray five times a day, and don't do any of the things you're saying of all Muslims. It's stereotyping," Affleck said. In the most heated point of the debate, Ben Affleck vigorously added, "We've killed more Muslims than they've killed us by an awful lot, and somehow we're exempt from these things because they're not really a reflection of what we believe in. We did it by accident, that's why we invaded Iraq."

These words have caused indignation among celebrities and in media circles. Bill Maher rejected having bigoted attitude towards Muslims. On a TV panel talk show, "The View," American TV personality Rosie O'Donnell, known for her worry about radical Christianity, supported Ben Affleck's attitude, and had even tweeted "Ben Affleck for President!" She said radicalism is a common threat and problem for all religions, not just for Islam. Apart from that, U.S Representative from Minnesota, Keith Ellison, who is Muslim, also supported Ben Affleck for his effort to eliminate biases against Muslims. He wrote on Twitter, "Ben Affleck, bless you. Thank you." AlJazeera journalist Lana Asfour wrote an opinion essay on the matter from a different angle. She implied that one does not have to necessarily be an expert in the area to give a reaction like Affleck's. Rather, he was simply able to recognize the prevailing racism at the time of debate.

As the issue is a highly sensitive one, the debate will continue to become hotter. However, it is sure that Ben Affleck's reaction was extraordinary and shocking in that it reminds of the humanitarian values that prioritize freedom over other identities like race, language and religion, and to not make generalizations about these identities for certain bad examples.