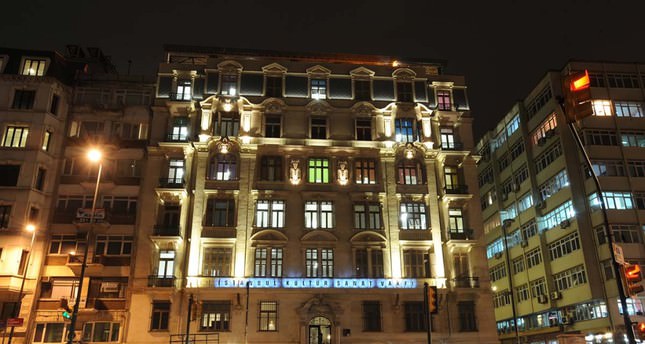 by Zeynep Esra İstanbullu Oct 18, 2014 12:00 am
The Performance Center of the Istanbul Foundation for Culture and Arts (İKSV) opens its new season on Oct. 20. The season will begin with the premiere of "Aalst." A joint production by Turkish and Polish theater groups, "Aalst" will premiere as a part of the 600th anniversary of diplomatic relations between Poland and Turkey and will be the opening play of "Oyun Salonu" (Play Hall). The play will be staged in collaboration with culture.pl, a division of the Adam Mickiewicz Institute that promotes Polish culture internationally. "Aalst" was inspired by a true story and focuses on a couple that killed their two children in Aalst, Belgium. The play takes the form of an investigation and tries to uncover the reasons for the couple's act. At the same time, an unidentified "voice" questions the relationship between the actors and the audience while drawing attention to social issues. Written by Pol Heyvaert, the play is directed by Radek Rychcik. Anna Maria Karczmarska designed the stage and costumes, and Michał Lis composed the music and imagery. It stars Bengü Ergin, Adihan Şentürk and features Ertürk Erkek as the voice. The play will be performed on Oct. 20 and 21 at 8:30 p.m. Oyun Salonu will also host three other plays: In Between - WaMD, Kalem (The Pencil) and İstenmeyen (Unwanted).

"In Between - WaMD" is the second play that will be performed in collaboration with culture.pl. The play is an interdisciplinary production that will involve Cezary Duchnowski, Paweł Romańczuk, Kostat Georgakopulos and Maciej Walczak staging analog and digital formats simultaneously by playing on the structures of music and words. Oyun Salonu welcomes those who want to experience a unique theater production on Nov. 22 at 8:30 p.m.

Performed by Tiyatro Artı, the one-act play "Kalem" (The Pencil) focuses on the perception of watching. The play's aim is to create a different theater experience with its extraordinary editing and positioning to the audience. "Kalem," which was staged during the 19th Istanbul Theater Festival, challenges the classical structure of the play by focusing on issues such as censorship and individuality. Written by Didem, the play is directed by Ufuk Tan Altunkaya, while Zeki Elveriş composed the dramaturgy of the play. "Kalem" will be performed on Nov. 3, 10, 17 and 24.

Performed as a part of the 19th Istanbul Theater Festival, the one-act play İstenmeyen (Unwanted) recounts the story of a young Turkish woman who was brought up with western ideals who falls in love with an Egyptian pilot. Together, they struggle to hold on to their love in an environment undergoing changing political conditions and social prejudices. "İstenmeyen" also focuses on the concepts of family and politics as well as cultural conflicts. The play was written by Gülce Uğurlu and is directed by Ceren Ercan. Öznur Derin Onur composed the dramaturgy of the play, while Alı Bostancı is the play's choreographer. "İstenmeyen" will be performed on Dec. 1, 8, 15 and 22 at 8:30 p.m.