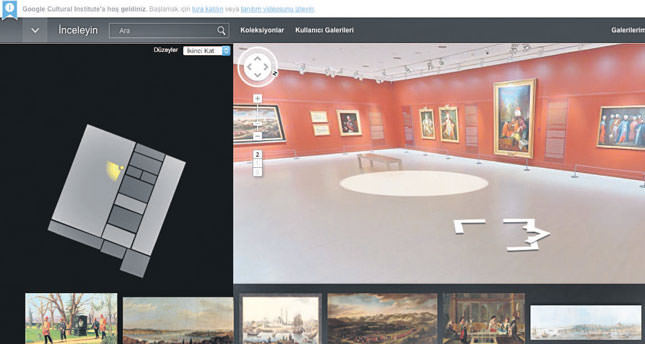 by Kaya Genç Oct 25, 2014 12:00 am
For a long time Turkey's museums and art galleries seemed immune to the charms of the Internet. One had to take a tram to Karaköy to see all the great artworks at Istanbul Modern, the city's museum of modern art. The exhibitions at SALT Galata could only be enjoyed by those who showed the effort to travel to its building on Bankalar Caddesi. Without driving to Emirgan you had little chance of learning what the new ambitious show at Sakıp Sabancı Museum was offering its visitors.

In the past few months, however, things have changed. Thanks to Google's Cultural Institute (https://www.google.com/culturalinstitute), which digitizes millions of artifacts from museums and art collections, pointing one's browser to the right website has become more important than driving one's car to the right address. Some of the world's most important cultural institutions, including the British Museum, MAXXI National Museum at Rome and Leopold Museum in Vienna, partnered with Google and are offering their collections to Internet users, free of charge and any physical effort.

"Google has partnered with hundreds of museums, cultural institutions, and archives to host the world's cultural treasures online," the website has announced. "With a team of dedicated Googlers, we are building tools that allow the cultural sector to display more of its diverse heritage online, making it accessible to all. Here you can find artworks, landmarks and world heritage sites, as well as digital exhibitions that tell the stories behind the archives of cultural institutions across the globe."

In the U.S., 78 institutions are represented on the Cultural Institute platform. The number of Turkish cultural institutions is comparatively modest but they offer top quality content. Elgiz Museum of Contemporary Art, Istanbul Modern, Pera Museum, Sakıp Sabancı Museum and SALT have opened their spaces on Google Cultural Institute. Although Google unveiled the initiative as early as in 2011, it was only in the last two years that the Cultural Institute came to its own. Forty-two new historical exhibitions were announced on October 2012, including D-Day (which presents the famous landings including color photographs, personal letters and the D-Day order itself), The Coronation of Queen Elizabeth II ("an account of the 1953 Coronation including color photographs") and Tragic love at Auschwitz (featuring the story of a couple in love who try to escape Auschwitz).

With an ever growing list of partners, including Anne Frank House in Amsterdam, the Auschwitz-Birkenau State Museum in Poland, the Polish History Museum, and Smithsonian Freer and Sackler in the U.S., the Institute is attracting the attention of visitors worldwide.

Google Cultural Institute is very easy to use. When I chose SALT from the "collections" section, I was provided with six different exhibitions, including one about the Ottoman Bank. Another exhibition focusing on the Atatürk Cultural Center featured old pictures of Taksim Square, Istanbul Opera Building and sketches of the now defunct center. I was able to save those high-resolution images and e-mail them to friends. One can easily spend hours browsing archives like those which have been meticulously put together by professional archivists. I saw the front page of Günaydın newspaper dated Nov. 27, 1970, which read: "It took 23 years to build the Cultural Center and 45 minutes to burn it to ashes." Here is a historical document one could have difficulty finding elsewhere. Archives also include handwritten letters and official documents which have been exhibited in SALT's shows.

The most fun part of the Institute is perhaps the 360 degree virtual tours which allow viewers to take a digital tour of their favorite art spaces. Using the arrow keys of computers, users can walk inside Pera Museum, see works from its permanent collection and visit its cafe at the entrance. Pera's "Intersecting Worlds: Ambassadors and Painters" exhibition, which features ambassador portraits and patronage of ambassadors from the 17th to the 19th century, is available to be visited through a virtual tour. Most art exhibitions make demands on our time and we leave them in a state of exhaustion. Interestingly, the world of Google's Cultural Institute is similarly captivating and once you enter through its gates, it may prove addictive.