Pera Museum puts orientalism in Polish art under the mıcroscope 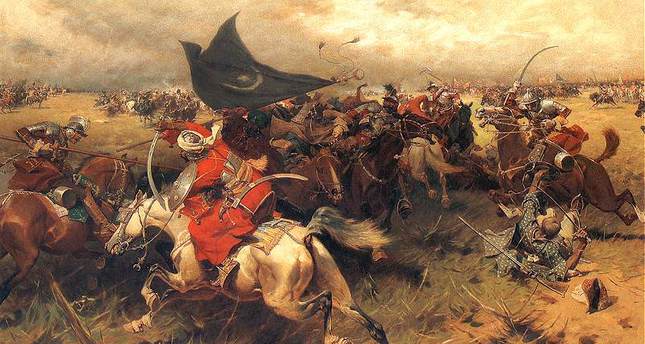 The exhibition ‘Orientalism in Polish Art’ opened its doors yesterday at the Pera Museum as a part of the 600th anniversary celebrations of diplomatic and cultural relationships between the Ottoman Empire, and later Turkey and Poland

Organized with contributions by Poland's Ministry of Culture and National Heritage and with the collaboration of the Warsaw National Museum, the exhibition "Orientalism in Polish Art" will be on display until Jan. 18, 2015. The exhibition features over 180 paintings borrowed from the collections of the Warsaw, Krakow, Poznan and Wroclaw National Museums, Warsaw University Library and Lazienki Royal Museum along with Istanbul Military Museum, Suna and the İnan Kıraç Foundation Orientalist Painting Collection and other private collections. Curated by Professor Tadeusz Majda, the exhibition showcases paintings from the 17th to early 19th centuries and is displayed in seven sections. The exhibition also has a special section featuring works by prominent Polish painters who visited the Ottoman Empire such as Franciszek Zmurko, Jozef Brandt, Jan Matejko, Waclaw Pawliszak, Jan Ciaglinski, Jacek Malczewski and Jan Christian Kamsetzer along with Stanislaw Chlebowski, who was the royal painter in Sultan Abdülaziz's court from 1864 to 1876.

Speaking at the inauguration of the exhibition, the Poland's Minister of Culture and National Heritage Malgorzata Omilanowska said that they started the celebrations on March 1 and this season has been wonderful. She said they organized various cultural activities in cities such as Istanbul, Ankara, İzmir and Bursa and underscored that these events are very important for Poles as well. She said: "This exhibition points out an interesting period. We shared the same border for 300 years and it is conducive to the improvement of relationships and communications with Turkey." The minister noted that this relationship was not always peaceful as there were wars between the Ottoman Empire and Poland, however, these interactions led to important partnerships. "For example, there are a lot of Turkish words in Polish and if you study Polish culture in detail you will find traces of Turkish culture as many traditions and customs were borrowed from Turks," Omilanowska said. "The Polish people started to consume coffee after their interaction with Turkish culture," she said, adding that the two countries have a strong foundation to take this relationship one step further in modern times. She said the 600th anniversary celebrations provide them the opportunity to turn a new page regarding not only cultural, but also economic relationships between the two countries. "We also exhibited works of contemporary music and film, design and other fields in Turkey," Omilanowska added. She said that the exhibition at Pera Museum is important as it indicates how many Polish painters and artists were influenced by Ottoman and Turkish culture and said, "You will see how much your country became a source of inspiration for our artists." Stating that Turkish officers contributed greatly to the organizational process, Omilanowska reported that she had the chance to attend several Turkish events in Poland. She further noted that Poland hosted many events to promote Turkey as well and that she found the chance to spend some time with her Turkish friends during the exhibitions.

"If our Turkish friends want to come to Poland and introduce their culture in our country, our doors will be wide open," the minister said, adding that they have already started to plan next year's events. Polish ambassador to Istanbul, Grzegorz Michalski, pointed out that the exhibition proves the importance of culture in diplomatic relationships. He said diplomacy is not a one sided monologue but a dialogue and thanked everyone who contributed to the exhibition. Ozalp Birol, general manager at Suna and the İnan Kıraç Foundation's Culture and Art Enterprises, said the exhibition is a magnificent event focusing on the orientalist tendencies of Polish art at the time and added that the exhibition is spread between three floors.