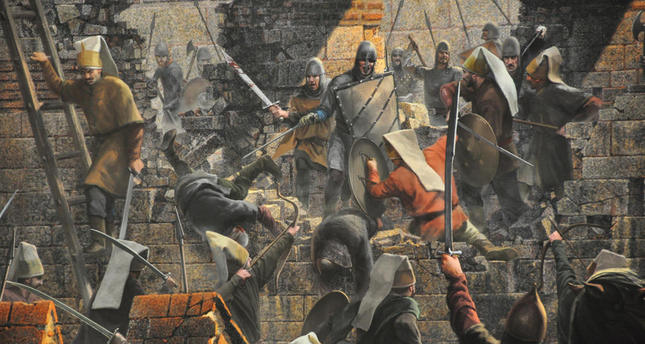 One-hundred years ago, the Ottoman Empire’s attack on the Black Sea would spell the end of the 600-year-old empire, which had once stretched from Budapest to Mecca and from Baghdad to Algiers. But from the ashes of the Empire rose the modern Republic of Turkey, perhaps the most politically important country in the Middle East today

In late October, 1914, two Ottoman warships departed Constantinople, cutting northeast through the Black Sea to stage a surprise attack on the Russian seacoast.

The mission by the battlecruiser Yavuz Sultan Selim and the light cruiser Midilli, accompanied by other Ottoman ships, would inflict damage on its targets - the cities of Odessa, in what is now Ukraine, and Sevastopol and Feodosia, on the Crimean peninsula.

But more importantly, the attack, launched 100 years ago Wednesday, would spell the end of the 600-year-old Ottoman Empire, which had once stretched from Budapest south to Mecca, and from Baghdad west to Algiers.

But from the ashes of the empire would rise the modern Republic of Turkey, perhaps the most politically important country in the Middle East today. The Ottoman Empire had been in decline for centuries: It was to describe the Ottoman Empire that the phrase "the sick man of Europe" was coined. And European powers were waiting to fall upon the carcass, the historian Barbara W. Tuchman wrote in "The Guns of August," her history of the first month of World War I. "But year after year the fabulous patient refused to die, still grasping in decrepit hands the keys to immense possessions," she wrote.

Yet as war gathered, breaking like a thunderstorm over Europe that August, erupting into what is now called World War I, the Young Turks who had come to govern the Ottoman Empire, were worried.

They had calculated that there was no way to stay neutral as the world went to war. And they wanted the Ottoman Empire to ally itself with what would end up being the winning side.

In the simplest terms, they got it wrong. With the shelling of Odessa, Sevastopol and Feodosia, they tied the empire irrevocably to the fate of Germany and its partners in war. And when in 1918 the allies won and occupied Constantinople - to be officially renamed Istanbul 12 years later - the Ottomans were forced to surrender. History, error and intrigue had all played into the decision of the Young Turks to throw in their lot with Germany. There was, to begin with, an affinity between Turks and Germans. German influence in Ottoman schools had been growing during the reign of Sultan Abdülhamid II, which began in 1876, said Akif Kireççi, an associate professor of history at the Ankara-based Bilkent University. "This influence grew stronger after Sultan Abdülhamid II was overthrown by a military government led by the Young Turks in 1909," Kireççi said. The Young Turks were a movement that favored the end of the absolute monarchy, as well as political modernization, and the institution of multi-party democracy.

In addition to the pull of the Germans, there was a push by the British. In 1911, in the person of Home Secretary Winston Churchill - who would, nearly 30 years later, become prime minister - the British had rejected a request from Turkey for a permanent alliance.

And Churchill was by no means finished in showing the Ottomans what might generously be called a lack of respect.

Three years later, in 1914 as first lord of the Admiralty, Churchill "requisitioned" as war loomed two Turkish battleships that were being built in British shipyards. The Ottomans, having paid $30 million for the ships - an enormous sum at the time - were understandably annoyed.

"In an effort to raise finances for these ships, many Ottomans gave away their personal jewelry to the national fund which was created for these big battleships," Kireççi said.

But the British, regarding the empire as too feeble to worry about, sent only a message of regret, offering nothing but a paltry annual sum should the empire remain neutral in the coming conflagration. This turned out to be an error.

There were other considerations, as well. As the war drew closer and alliance after alliance clicked into place, Russia wound up on the same side as the British and the French.

The Turks were suspicious of the Russians, who had for centuries yearned for control of Constantinople, which controlled the Dardanelles. That narrow, 19-mile strait into the Black Sea offered the only year-round access to Russian ports. To have entry to the Dardanelles controlled by someone else was not to the Russians' liking. They wanted that for themselves. The Turks feared what an allied victory - in other words, a Russian victory - might mean for their beloved capital. Beyond that, the Germans were prepared to be rather more helpful than the British had been.

This is where the intrigue came in.

In theory, the Turks had concluded an alliance with Germany on Aug. 3, the same day Britain expressed regret over requisitioning the Turkish warships. Enver Bey, the Young Turks' "little Napoleon" and the Ottoman Empire's minister of war, favored an alliance with Germany. But others among the Young Turks preferred to wait for a more definitive indication of which side might win the war. And so the promised Turkish declaration of war on Russia did not immediately materialize. But the Germans gave the Ottomans a bit of a push. On Aug. 4, 1914 - the day after the British had sent their little note of regret - the German commander in the Mediterranean received a radio message.

"Proceed at once to Constantinople," it said.

The German commander in the arena, Admiral Wilhelm Souchon, was in charge of two fast, new battleships - the Goeben, a huge, 612-foot-long (187-meter-long) battle cruiser, and the smaller, 4,500-ton light cruiser, the Breslau. The British were worried about the German battleships in the Mediterranean and what they were up to. But, through a series of miscalculations, they failed not once but several times to intercept the German ships and engage them in battle. The biggest miscalculation of all was that the British assumed the mission of the German ships was military - perhaps to attack French shipping in the Mediterranean, then escape westward through the strait of Gibraltar.

Never did it dawn on British officials, from ship commanders on up to Churchill, that the mission of the German ships was not military but political - and that their destination lay not to the west, and escape through Gibraltar, but to the east, and Constantinople.

In the event, on the evening of Aug. 10, 1914, the Goeben and the Breslau reached Constantinople. It was then that the decision to seize the Turkish battleships without compensation came back to haunt the British. For it had laid the groundwork, Kireççi said, for what was to follow. Very shortly, a fictitious sale was arranged and - presto - the German ships, the Goeben and the Breslau, became Ottoman warships, renamed the Yavuz Sultan Selim and the Midilli. Souchon, the German commander, was made commander-in-chief of the Turkish Navy. The ships' German crews donned Ottoman uniforms and fezzes. Still the Young Turks dithered. But as October wore on, the patience of the German chief of the Ottoman navy wore thin, and he determined to press the issue. The Ottoman procrastination had to end. And so, on Oct. 29, accompanied by several Turkish torpedo boats, the Yavuz Sultan Selim and the Midilli, under Souchon's command, steamed through the Black Sea toward the Russian ports. The German-cum-Ottoman ships inflicted damage. A ship was sunk, a church was damaged, civilians were killed. The attacks were deemed a success.

The following day, Oct. 30, the Ottoman Empire officially entered the war. Souchon had achieved his goal. But the empire was now doomed. In the war that followed, its ally, Germany, was defeated. And the Arabs, led by the British Army officer T.E. Lawrence, revolted as well. On Oct. 30, 1918, exactly four years after it had entered the war - in large part because of Souchon's maneuvering - the Ottomans surrendered. The 600-year-old empire had come to an end. Much of it would be carved up over the next two years by an agreement between France and Britain, creating the national boundaries of today's Middle East. And from the ashes of empire would rise, led by the World War I army officer Mustafa Kemal - a man later called Atatürk - modern Turkey is still one of most powerful and influential countries in the region.