Erol Güngör: Culture instead of politics 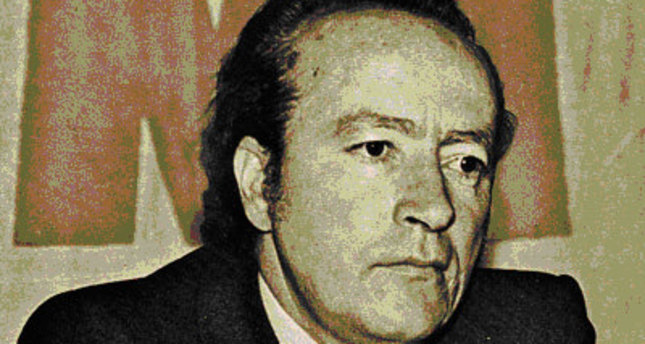 Cultural change, or transformation of culture, has been among the major issues examined by the social sciences in Turkey. Mainstream social scientists recognize and salute this as Westernization, which was one of Mustafa Kemal Atatürk's goals. According to this perspective, Turkey was underdeveloped not only economically, but culturally as well. So Westernization, as a rapid and shocking model of cultural change, would make the Turkish people find a new and modern culture, given that this goal was achieved by the transformation of attitudes through educational and cultural institutions. According to this belief, the more secular a people becomes, the more development would be earned.

Only a third and even smaller party of populist intellectuals do not see the struggle between the intelligentsia and the people as a matter of love or hatred, but they take it as a problem to be analyzed thoroughly. One of these analysts was social psychologist and cultural critic Erol Güngör. Sometimes he was cruel in judging intellectuals for their inconsistencies, but he never disdained the people. Instead, he generally praised the Turkish people since they tended to preserve Turkish culture against the pressures of Westernization.

Güngör was born on Nov. 25, 1938 in the central Anatolian province of Kırşehir. According to Cengiz Aydoğdu, "Central Anatolia is a part of our land that was rarely visited by political history and never visited by the international history, but it was a stage of our inner national history." Güngör hailed from a family of Muslim scholars. His grandfather, Osman Hamdi Efendi, was educated in a madrasa in Istanbul during the period of Sultan Abdülhamid II. He was assigned as an imam to a grand mosque in Istanbul after the Republic was established, but he decided to leave Istanbul and returned to Kırşehir.

Güngör's father, Abdullah Sabri, was a clerk in the Kırşehir judicial court. Güngör learned Ottoman calligraphy from his grandfather who was also his first teacher. He would later learn Arabic from Lütfi İkiz, a library clerk, French in high school from İlhan Berk - a prominent modern poet - and English from a friend. His English was so good that he was able to pass the proficiency exam before attending university.

In 1956, Güngör enrolled in Istanbul University's Faculty of Law. He befriended Yağmur Atsız, son of the great nationalist writer Nihal Atsız, and Mehmed Çavuşoğlu, later a scholar of old Turkic and literature. Güngör, along with Atsız and Çavuşoğlu, frequented the Marmara Cafe where they would meet intellectuals such as writers, poets and scholars including Sezai Karakoç, Ziya Nur Aksun and Dündar Taşer.

When Güngör was a sophomore, Fethi Gemuhluoğlu took him to Mümtaz Turhan, then a professor at in the department of psychology. Güngör then switched his concentration to psychology in the faculty of arts. He graduated from Istanbul University in 1961 and began working as an assistant in the same department. In 1965, he received a Ph.D. in social psychology after writing a dissertation titled "Kelami Yapılarda Estetik Organizasyon" (Aesthetic Organization in Verbal Structures).

He became a visiting professor at the University of Colorado Boulder (UCB) in 1966 after being invited by famous social psychologist Kenneth Hammond, and contributed to the research of an international group of scholars at the CU Behavioral Science Institute. He then became an Assistant Professor at UCB in 1970 after writing a thesis titled "Şahıslar Arası İhtilafların Çözümünde Lisanın Rolü" (The Role of Language in the Solution of Inter-Personal Disputes).

In 1978, he moved back to Istanbul to become a resident professor at Istanbul University and contributed to various commissions held by public institutions such as the Ministry of Culture, the State Planning Organization and the Ministry of Education.

In 1982, he was assigned as the founding rector of Selçuk University in Konya. While working at that position he died of a heart attack on April 24, 1983.

Though he was a key figure in social psychology, Güngör's real reputation comes from his critical essays and articles on cultural themes such as religion, the intelligentsia, Westernization, Sufism and nationalism. He was writing on the problems of Turkish modernization as early as his 20s, and such writings are neither scholarly nor ideological, but they have an intellectual and critical vision.

In his early articles, collated into a book titled "Sosyal Meseleler ve Aydınlar" (Social Issues and Intellectuals), he purported such ideas as the Turkish people have created a specific and sufficient moral system, there is a need for a national cultural policy, Islam has established one of the greatest civilizations on earth and intellectuals are under the influence of foreign cultures.

Güngör was a religious Turkish nationalist and never implied racist attitudes. His understanding of Turkish nationalism had three roots. The first was Seljuk and Ottoman history, the second was Islam as a foundation of the Turkish national mentality and social behavior and the third was free cultural changes depending on democratic principles. These ideas did not come from a type of liberalism. Indeed, Güngör's nationalism was Islamic populism. In his books on nationalism, namely "Kültür Değişmesi ve Milliyetçilik" (Cultural Change and Nationalism), "Türk Kültürü ve Milliyetçilik" (Turkish Culture and Nationalism) and "Dünden Bugünden" (From Past and Present), he was asking for a higher national culture depending on the Islamic culture of the Turkish people. He always judged leftist intellectuals because of their arrogance against the people and their national and Islamic.

Güngör's most outstanding work is perhaps a semi-scientific and semi-intellectual study on the political and cultural questions of Islam, "İslâmın Bugünkü Meseleleri" (Current Issues of Islam). First, he mentions "the wake of Islam" in the second half of the 20th century. After that, he draws a detailed picture of modern confrontations such as Islam and the West, Sunni Islam and Sufi Islam, Islamic law and modern law. Third, he explores Islamic nationalism and Islamic socialism in various Islamic countries. Finally, he discusses the possible role of intellectuals in the Islamic revival. He criticizes both the archaism and cosmopolitism of intellectuals and asks intellectuals to both acquire Western sciences and be loyal to the values of the Turkish Muslim people. "The ones who establish the civilization are not the politicians," he writes, "but, on the contrary, they are the scientists and artists."