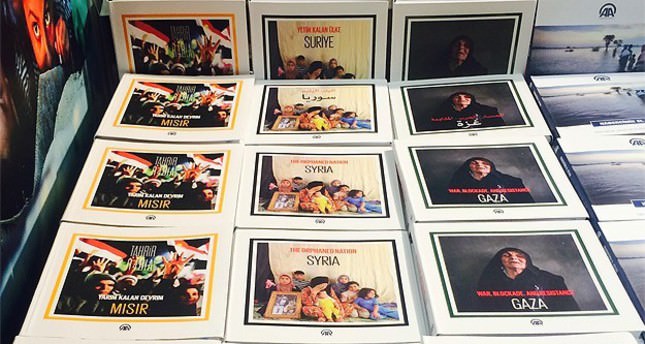 by daily sabah
Nov 27, 2014 12:00 am
Anadolu Agency (AA) recently published three books in a series titled "AA Was There." The books focus on Egypt, Gaza and Syria and the pain they deeply suffer. As AA expands its coverage across the globe - in the Americas, Europe, the Middle East, Central and South Asia and the Asia-Pacific - it bears witness to more heart-wrenching tragedies, historical events and stories it needs to tell. Anadolu Agency Director General Kemal Öztürk discussed the book series with Daily Sabah.

Daily Sabah: How did this process start?

Kemal Öztürk: Journalists have always been the eyewitnesses of history. Of course, we could never say this beforehand and we are not always aware of this as events are unfolding. In this case, as in others, it was both a big opportunity and a great challenge to work in one of the most volatile regions in the world. We have been following the events in the Middle East very closely; our agency boasts a strong network in that region as we provide text, photos and videos. We decided to collect all the materials that we had and make a book out of it, as all these materials - all of these archives - told a rich story. I said it would be a shame if the agency did not publish these books. Anadolu Agency has witnessed a considerable amount of pain in the Middle East. I thought our efforts should not - could not - go to waste. This is not just another series of books; it is a memory project.

DS: Why did you choose those three countries?

KÖ: In Egypt, in Gaza and in Syria, pain practically never abates and Anadolu Agency correspondents are eyewitnesses to events that usher in such despair. From covering these events, their lives, too, change because of injuries, sickness or sometimes even depression and death. The books - "War, Blockade, Resistance: Gaza," "The Incomplete Revolution: Egypt" and "The Orphaned Nation: Syria" - include eyewitness accounts by Anadolu Agency reporters. After certain experiences, you can never be the same again: Seeing people shot in front of your eyes, women and children tortured to death. So, we decided to collate our individual experiences as reporters into a book. We produced three separate books in which we tell the stories of Egypt, Gaza and Syria, retracing the recent current events of these past years - events that we witnessed in the field. These are testimonies that also contain strong emotions and feelings. These are illustrations of how our reporters felt, what they thought when they took a picture of a child who has been shot, when reporting a coup d'état or when shooting a video of an old man dying of thirst.

The book on Egypt's recent history mainly deals with the fall of Hosni Mubarak and the coup staged by General Abdel-Fattah el-Sissi, which removed the country's first elected president, Mohamed Morsi.

"The Orphaned Nation: Syria" begins with the country's political history and examines the apocalyptic devastation the civil war has wreaked. Some 30 reporters and correspondents worked to create each book and each contains exclusive images from AA photojournalists.

DS: Will the publication of the AA series go on?

KÖ: Absolutely! As I said before, this is a project of memory. There will be a total of five projects. After these books, we are thinking about publishing another two: One about the Arab Spring and the other on Ukraine. We hope that these works will contribute to efforts towards ending tragedies in these regions, which have for so long - too long - been the setting for the world's most poignant stories.