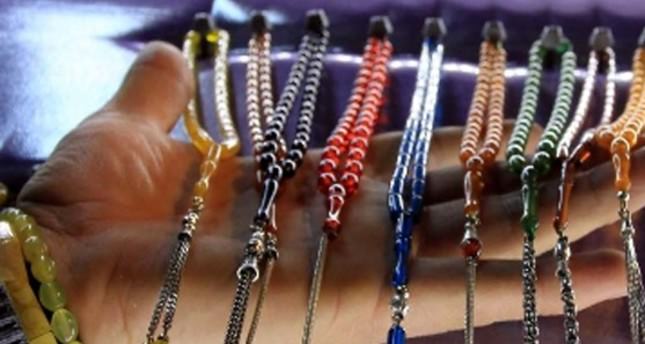 Counting tasbih is a tradition in Turkey. It can be done for religious purposes or simply to relieve stress. While there is only one way to count the beads, there are many ways to make them

Tasbih (prayer beads) is a widely-known tradition in Turkey. The materials used to make tasbih are cut in rod-shape and then divided into pieces according to the desired number of tasbih to be produced. These pieces are perforated in a lathe with a device called "çarkuşane" in 3,500 spins by the minute. The bead, also known as "habb" is placed in mold and spun with the left hand while it is shaped with a graving toll and grater with the right hand. This process continues until all beads are the same in size. Before taking the bead out of the arbor they are polished with kaol - kind of a polishing solution sold at herbal stores. Old masters are known to polish even the hole in each bead. When the polishing is complete the beads are stringed on a line called "tahril." Tasbih-makers gradually began using electric lathes and even computerized ones, modernizing their workshops since 1965. It is known that there are no longer any tasbih-makers who use the "çıkrık kemane" - a type of spinning wheel - but those who used it once upon a time signed their works in their own style. Producers of wooden tasbih however, use the "imamah" (the single long piece in the tasbih) to distinguish their work from others.

During the Ottoman Era, tasbih-making turned into an art and craftsmanship and expert tasbih-makers demonstrated their craft on old lathes called "kemane," which was conducted with hands and feet. Due to the changing conditions, tasbih-makers now use modern tools in their workshops. As it is said, the most beautiful tasbihs are made in Istanbul and wealthy people in Islamic countries who are interested in tasbihs have come to Turkey to purchase the tasbihs made by tasbihs masters of Istanbul for centuries. Aside from Muslims, beads are also common among Christians and Buddhists. In Greek and Cypriot culture, beads are used to pass time. Unlike the similar prayer beads, "worry beads" have become a part of daily life in the society and do not have any religious purposes. They are used among those who want to quit smoking or just unwind under stressful conditions. Worry beads are used for other purposes such as guarding against bad luck. The type of beads is believed to have treatment effects on different diseases. For instance, agate gives energy, while amber relieves pain and reduces respiratory infections. Jet is told to absorb negative energy.

According to Lokman Master, the number of people who collects tasbihs is increasing. The material that the tasbihs are made, the originality of their imame, grandiosity of the pieces and the colour harmony increases the tasbihs' value. It is known that some materials have positive effects when they touch people. After all, counting tasbihs takes a person to other worlds spiritually.