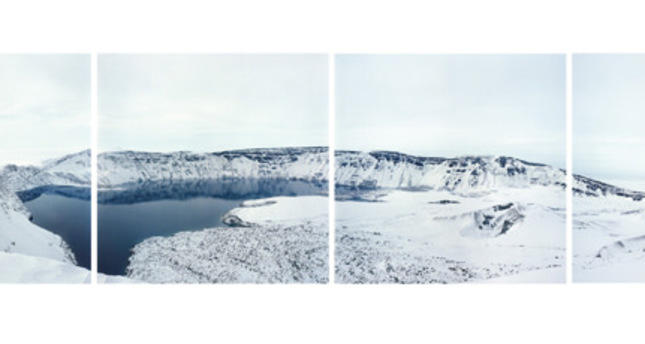 The exhibition titled "Common Ground: Water," which is a follow-up of the exhibition "Commond Ground: Earth," is open to the public at Perili Köşk's exhibition space and curated by Nazlı Gürlek. This selection is the second of Gürlek's exhibition series that focuses on the concepts of earth, water and air. The second exhibition titled "Overture: New Acquisitions" is in the service of art lovers curated by Borusan Contemporary's Artistic Director, Kathleen Forde. Forde selected the works featured in the exhibition from among the recently acquired works of the Borusan Contemporary Art Collection that have not been displayed before. The exhibition features works from Jim Campbell, Ali Kazma, Serkan Ozkaya, Jennifer Steinkamp, Universal Everything and Marina Zurkow.

"Overture: New Acquisitions" aims at displaying the recent initiatives of Borusan's collections based on geography, aesthetics and genre. "Exploded View" by Jim Campbell is composed of several white LEDs hanging together and extrudes the traditionally two-dimensional surface into three dimensions. The work is seen as an array of flickering lights that are placed randomly from most perspectives; however, from a certain point of view, the subject's focus shifts. Hence, the figures that can be barely seen become strangely comprehensible to the mind.

Ali Kazma's "Absence" was shot in an abandoned NATO base in the Netherlands without a single trace of humans but has provocative and haunting suggestions of its previous presence. In his works, the artist examines the smallest things that one cannot associate with the scenery that war causes. Through these tiny details, Kazma showcases the mentality of a world that has become a war machine.

Serkan Özkaya's artwork "Mirage," which is also the name of fighter-bombers manufactured by the French, offers imaginary reflections to the viewer. The moving shadow of the plane semantically and physically plays with notions of absence and presence. Özkaya does not include any interventions into the image itself other than light adjustments and creates a situation that makes the viewer change their perspectives into a multilayered anomaly. Jennifer Steinkamp's "Fly to Mars" is composed of a computer-animated projection of a tree that comes to life with movement as it cycles through the four seasons of the year. From the colorful flower buds of the spring to tree branches that become leafless in winter, art enthusiasts are getting a change to observe the natural cycle of a tree's foliage. At the same time, the tree on the image bows up and down as if it wants to break free from the gravity of the earth to take a flight into the universe. Universal Everything is a multidisciplinary studio collective that was founded in 2004. In their work "Supreme Believers," a lone figure tries to find its way on a sparse and grassy landscape. While the journey consists of a seemingly endless battle of the elements, the body begins decomposing and it disappears into a curious and mesmerizing cascade of particles by mysteriously surrendering to the invisible physical forces governing its existence. "Mesocosm [Times Square, New York]" by Marina Zurkow is an algorithmic work that represents the passage of time in a speculative, hybrid Times Square. One hour of world time elapses in each minute of screen time, so that one year lasts 146 hours. No cycle is identical to the last, as the appearance and behavior of the human and non-human characters as well as changes in the weather are determined by code using a simple probability equation: Seasons unfold, days pass, moons rise and set while animals, people, and weather come and go.

"Common Ground: Water" is the second exhibition in the series entitled "Common Ground: Earth, Water, Air," which are the selections Gürlek from the Borusan Contemporary Art Collection, on display throughout 2014-2015. Within the scope of these inter-related exhibitions, the works focus on the concept of earth, water and air offering a thematic look into the Borusan Contemporary Art Collection. The exhibition offers propositions to engage with various representations of water and a series of worldly matters related to water as a way to engage with contemporary art and the world. Earth, water and air are the sources that belong to everyone, as they are our joint property, are issues whose management bears importance for life on Earth insofar as equality and sustainability are concerned. The hang focuses on the meaning of this within the frame of a selection composed of works from the corporate collection in terms of either form or content. The exhibition features several forms of art including photographs, paintings, interactive installations, videos, neon and prints that relate to a wide range of natural contexts - from noble representations of beautiful and romantic landscapes, industrial sites and different aspects of nature's emotional impact on the landscapes to calm and idyllic settings to stormy seascapes.