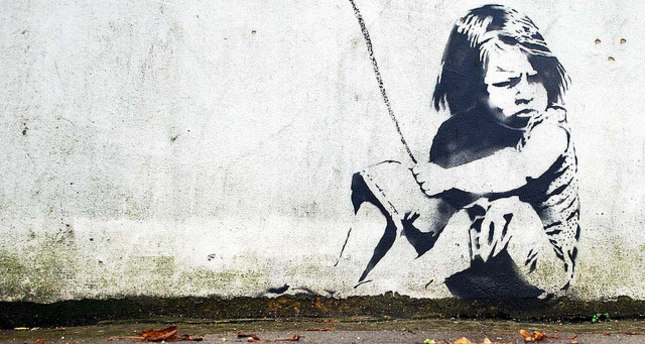 by Miraç Tapan Dec 05, 2014 12:00 am
"Art Buff," a mural painted by one of the world's most famous and provocative street artist, Banksy, will be sold at an auction during the CONTEXT Art Miami Fair.

The artwork, which first appeared last September on the wall of the Palace Amusements, a building in Payers Park in Folkestone, England, was shipped to Miami after being carefully salvaged from its original setting.

"Art Buff" depicts an elderly woman wearing headphones while looking at an empty plinth with her hands clasped behind her back. Before the auction, a selection of five other Banksy works is being showcased at the Art Miami Fair until Dec. 7, despite the ongoing controversies surrounding exhibiting original street art removed from their original contexts. The graffiti painting was removed from its original location in November, causing angry protests. Locals flocked to the area and protested against the workers who were drilling the wall to remove the artwork. Although the residents of Folkestone fought hard to stop the process, they were unsuccessful.

Robin Barton of the London-based art gallery Bankrobber, who removed and restored "Art Buff" before sending it to Miami, claimed that the Godden Family, owner of the building on which the artwork appeared, is "no longer able to carry the burden of protecting the work." The painting was vandalized by another graffiti artist two weeks after it first appeared. Art Miami Fair officials defended the auction as they believe that artworks which appear on the streets should be protected from those who seek to vandalize or paint over them. Although Banksy, who won "Best Documentary" award at the 2011 Academy Awards with his film "Exit through the Gift Shop," has not yet made any comments about the sale, said in his previous interviews that his works are intended to be short-lived as well as site-specific and provocative, and that they belong to the public.

It is estimated that Banksy's "Art Buff" will be sold for over $730,000, and the money acquired from the auction will be donated to the Jim Godden Memorial Cancer Trust. Banksy's works have been avidly discussed ever since 2011 when Stephan Keszler, a New York gallery owner, cut some of the artist's works off building walls and attempted to sell them to high-end buyers at prices ranging from $40,000 to $750,000. Banksy made a statement about the sale, criticizing Keszler for ruining the originality of his works by removing them from their contextual surroundings. Subsequently, none of the paintings was sold, and the gallery owner accused the artist of sabotaging his business. The following year, Keszler sent the murals to Miami to exhibit the notorious artist's works at the 2012 Art Miami Fair. Here, Banksy's works were placed on display for the first time together as a part of a major contemporary art fair.

The display fueled the debate about the meaning and nature of street art. Although some art lovers boycotted the fair, Art Miami welcomed record numbers of visitors that year. The executives of the fair also supported their exhibition, and claimed that the exhibition was designed to draw attention to the "growing debate about the ethics and importance of showing 'site-specific' street art outside its original context." In 2013, an auction planned to take place in London was canceled due to protesting Londoners. However, the works which were not sold in London were sold in Miami few months later. This year, Banksy and the nature of street art are once more on the agenda due to the CONTEXT Art Miami Fair. The fair offers an opportunity for art lovers to see some of Banksy's works in one location; however, profiting from street arts raises eye brows. "Commercial success is a mark of failure for a graffiti artist," an anonymous artist once said. So, the big question is whether these exhibitions and auctions praise Banksy or just degrade his art.