Religious harmony enriching the southeast on display in exhibition 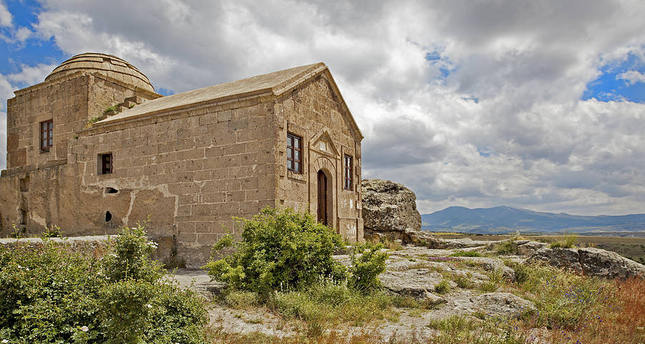 Southeastern Anatolia is a mosaic of interacting cultures, which for centuries, have enriched the region in various ways. The "Amin-Amen Faiths and Beliefs in South-East Anatolia Photo Exhibition" aims to reflect this interaction particularly in terms of religious beliefs, practices and behavior, alongside caves, rock tombs, thrones of gods, churches in caves, city ruins, wells and castles.

The Amin-Amen Photo Exhibition is a long-term project carried out with the cooperation of GAP Regional Development Administration and the AFSAD-Ankara Association of Photograph Artists. Between 2000 and 2013, 15 photographers worked together for 13 years within the multicultural borders of southeastern Anatolia. A total of 758 photos are exhibited in groups across 104 different panels.

The exhibition was opened at İBB (Istanbul Metropolitan Municipality) Taksim Cumhuriyet Art Gallery on Dec. 3. AFSAD President Mustafa Erkin spoke on the multimedia exhibition ahead the opening ceremony. "It has been said that current clashes like the ones in Syria and Iraq arise from differences in faith and beliefs. We photographers, however, do not agree. We believe that the exact cause of these clashes has nothing to do with religious differences," Erkin said, implying that faiths and beliefs in southeastern Anatolia are sources of wealth rather than being the driving forces of division.

As the exhibition illustrates, southeastern Anatolia is home to four different religious groups dating back to ancient times: Yazidis, Jews, Assyrians and Muslims. The exhibition reflects the wide variety of religious beliefs, practices and behavior. Graves and funereal traditions, religious holidays, routine religious practices, places of worship and rituals are the main elements of the exhibition. Moreover, photos are grouped on panels in order for the audience to compare and interpet the common grounds shared by these five groups. Each panel has a theme with a unique perspective.

Yazidis, the name of which mean "those given by God," pay homage to the soil in which they bury their loved ones. There are some precious pieces in the exhibition that reflect their funeral rites. While some photos portray animal figures and flowers on the tombstones, others depict how Yazidis use metaphorical emblems to remind them of the hereafter.

Buildings constructed in the Jewish tradition form another element of the exhibition. The audience may realize via the photographs that the interior design of their places of worship not only represent Judaism, but is also a panoramic portrayal of the vividness of southeastern Anatolia.
Assyrians of Semitic origin are presented through their rites of religious holidays such as weekly Divine Liturgy (named Uharisti in Syriac), Christmas (Yaldo in Syriac) and Easter, while Alevis are pictured performing their "cem" and "eid-al adha" rites. Master shots and close-ups reveal details of how they dress for these religious days, and how they all come together to lament or rejoice.

Muslims are portrayed in photos based on a ritual perspective. Therefore, prayers, Ramadan, Holy Jummah (Friday), the feast of circumcision and funeral and condolence traditions are the main subjects of all the photos. İbrahim Göğer, the curator of the exhibition, underlines that "the exhibition wants audiences not to be charmed by only one or two photos." Instead, it asks them to see the meta-narrative: the faiths and beliefs of southeastern Anatolia is a dialogue of unity and inter-faith. That is why individuals from all the groups are portrayed as part of a whole rather than as independent persons on every single panel. Although you may see many portraits from each group, they are to be viewed as part of a patch-work. The exhibition will be open to visitors between December 3-16, 2014 at İBB Taksim Cumhuriyet Art Gallery from 10:00 a.m. to 7:00 p.m. every day except Sundays.