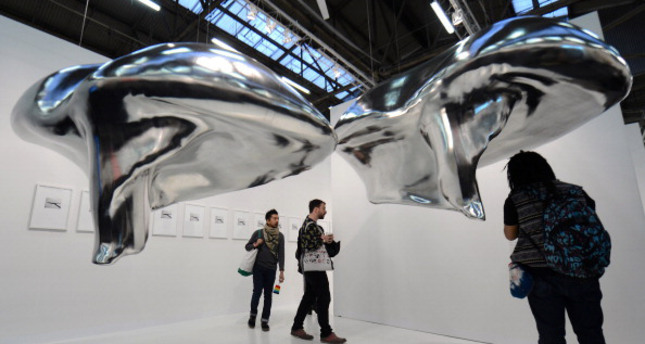 by Daily Sabah Dec 15, 2014 12:00 am
In its sixteenth year, the Armory Show will be designed by Brooklyn-based architects at Bade Stageberg Cox. They will transform Piers 92 and 94 along the Hudson River on Manhattan's west side into a spectacular setting for over 65,000 visitors. A lively opening night benefit party will be held at the Museum of Modern Art along with engaging open forum discussion sessions.

As Noah Horowitz, the executive director of the Armory Show, says: "It is a very exciting moment for The Armory Show with this year's fair marking the most focused and highest caliber edition in my tenure. The selection process for the upcoming edition was particularly rigorous, and I am thrilled to see a number of notable galleries returning to the fair, as well as a strong presence of young, geographically diverse galleries who have chosen to show with us for the first time."

The Armory Show has received a record number of gallery applications, too. There will be different sections devoted to spectacular presentations. "Pier 92 - Modern" will introduce artists from the 20th century and "Pier 94 - Contemporary" is dedicated to prestigious international galleries that showcase the works of living artists. Curated by Omar Kholeif, "The Armory Focus: Middle East, North Africa and the Mediterranean (MENAM)" will be a special section of Pier 94. In collaboration with lead cultural partner, Edge of Arabia and education partner, Art Jameel, the MENAM will presumably attract art lovers that are willing to explore the Middle East. Aside from these, the fair will introduce "Armory Presents" with a focus on single and dual artist presentations by young galleries.

Concurrently with the fair, the Armory Arts Week will be a citywide program of cultural events and exhibitions in five boroughs of New York. "The New Museum's 2015 Triennial: Surround Audience" will also run alongside the fair. Lawrence Abu Hamdan, the commissioned artist of the Armory Show, has been included in the triennial's program. Advance tickets will be available for purchase in January. Detailed information is available at www.thearmoryshow.com.

Who is Omar Kholeif

Kholeif works as a writer, curator and editor. Presently, he is the curator of the Armory Focus and the London-based Whitechapel Gallery. Kholeif is also a senior editor at Ibraaz Publishing, senior visiting curator at Cornerhouse and HOME. Kholeif was the co-curator of the Liverpool Biennial in 2012 and the founding editor of Portal 9, an Arabic-English journal of urbanism and architecture. Further, he has been the artistic Director at the Arab British Centre in London. In previous years, he headed up Art and Technology at SPACE, London and was a curator at Liverpool-based Foundation for Art and Creative Technology (FACT). Here are some of his most recent publications: "You Are Here: Art After the Internet" (2014), "Virgin with a Memory" (2014) and "Jeddah Childhood circa 1994" (2014). In 2015, he will curate the Pavilion for Cyprus at the 56th Venice Biennale and the Abraaj Group Art Prize at Art Dubai, UAE.

The Artist Commission of Armory Show

Lawrence Abu Hamdan will help to create the visual identity of the upcoming edition and produce a limited number of artworks. Abu Hamdan's practice looks to measure the relationship between politics, human rights, international law and the act of listening through the production of audio documentaries and essays, installations, sculpture, photography and performance. Exploring essential concepts of political speech - the oath, right to silence, freedom of the press - are at the center of his work, often demonstrating that the battle for free speech is largely about controlling the conditions in which we are heard.

Art Jameel - Abdul Latif Jameel Community Initiatives (ALJCI) arts and culture initiative - develops cultural exchange programs to encourage networking and knowledge sharing. Within the Middle East, North Africa and Turkey (MENAT) region, it aims to promote a flourishing arts scene and support the development of creative enterprises. Art Jameel is the founding partner of Edge of Arabia, The Crossway Foundation, Arabian Wings, Jeddah Art Week and The Archive. In partnership with the Victoria and Albert Museum in London it provides the biannual Jameel Prize for contemporary art inspired by Islamic traditions. Additional projects include: Jeddah Sculptures Museum, a public park established in collaboration with the Jeddah Municipality; the Art Jameel Photography Award; and the Art Jameel Art Olympics in collaboration with the Ministry of Education in Saudi Arabia.

Founded in 2003, ALJCI encourages positive social change through the establishment of long-term partnerships with international institutions and the creation of initiatives in the fields of Job Creation, Global Poverty Alleviation, Arts and Culture, Education and Training, Health and Social. More information on ALJCI's considerable number of initiatives is online at aljci.org.

As an independent non-profit arts and education enterprise and cultural platform, Edge of Arabia connects artists between the Middle East and the Western World. Sharing a common desire "to create a real artistic movement that connected people across borders," the initiative is the brainchild of a group of British and Saudi artists who met in the mountains of southwest Saudi Arabia in 2003. Edge of Arabia intends to foster new audiences, create more networks and inspire artists to develop independent and authentic practices. The exhibitions, educational programs, publications and expeditions of the initiative connect ideas across border.