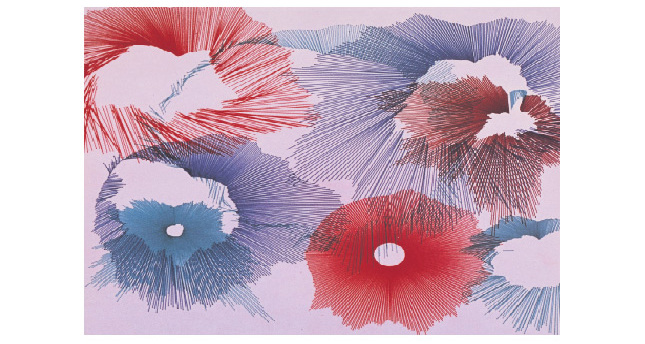 Curated by Ekmel Ertan, ‘Histories of the Post-Digital’ exhibition at Akbank Sanat Beyoğlu explores the beginnings of digital art

If you visit Akbank Sanat Beyoğlu this winter you will come across, on its first floor, a large table covered with computers, books and exhibition catalogues. The table gives the place an air of energy and experimentation -here is a space where you can work, research and explore. The table, labeled "Off-Line Media Corner" provides an introduction to the exhibition upstairs. Curated by Ekmel Ertan and co-curated by Darki Fritz, "Histories of the Post-Digital" is one of the least self-explanatory shows I've seen this year. Curators seem to have left the task of discovering the show's subject matter, the birth of digital media art during the 1960s, almost entirely to the viewer.

The centerpiece of the exhibition, "9 Evenings: Theatre and Engineering," focuses on a series of performances that took place at the 69th Regiment Armory building in New York in 1966. Designed in the Beaux-Arts style, the building had housed New York Knicks basketball games in the 1950s and 1960s before hosting more experimental projects. "With performances by 10 artists, '9 Evenings'is a milestone in the field of art and technology, an event where many of this field's firsts originated," Ertan explains in the exhibition program. "9 Evenings: Theatre and Engineering" featured performances of dance, music, film and television. Most crucially, it incorporated technology into the artistic experience and brought together artists, avant-garde performers and engineers from Bell Telephone Laboratories. The show featured legendary performances, including John Cage's "Variations VII,"Lucinda Childs's "Vehicle" and Alex Hay's "Grass Fields"among others.

Visitors to Akbank Sanat Beyoğlu can use specially manufactured screening sets on the building's second floor to view filmed versions of these shows. Filmed by Alphons Schilling, photographed by Peter Moore, Robert McElroy, Burt Shavitz and Franny Breer, the events were designed by engineers Billy Kluver and Fred Waldhauer and artists Robert Rauschenberg and Robert Whitman.

Perhaps the most creative experience offered in the show was by John Cage who used 20 transistor radios that randomly intercepted the content of shows and the interference between the stations. "Cage used 10 telephone lines to pick up ambient noises from various locations in New York and broadcast them for the duration of the performance. These places included Liuchow's Restaurant, the Bronx Zoo aviary, the 14th Street Con Edison electric power station, the ASPCA lost dog kennel, the New York Times press room, Terry Riley's Turtle Tank and Merce Cunningham's studio," the exhibition program explains.

The sounds picked up from those locations were played over 12 speakers at the Armory building and thanks to Cage's genius, the audience was made to pay the same level of attention to voices from a newspaper's press room, a restaurant and a dance studio.

Equally fascinating is Alex Hay's performance, "Grass Field," where the artist wears "a backpack of specially designed differential amplifiers with a peak gain at low frequencies of 80 decibels and FM transmitters that picked up brain waves, muscle gravity and eye movement from electrodes placed on Alex's head and body." With those electrodes placed on his head and back muscles, Hay lays out pieces of cloth on the stage while another microphone amplifies sounds from his throat. The second part of the "Histories of the Post-Digital" exhibition is devoted to the New Tendencies, a movement dedicated to concrete and constructivist art. Organized in Zagreb in 1968-1969 and 1973, the New Tendencies exhibitions "took place in the relative periphery of Europe at an early date and inspired a discussion that the computer has come of age as an artistic medium."

Ertan's aim in this exhibition was to point out how digital technologies became part of everyday life and contemporary art today. The idea is to show how "it completed the digital revolution process and turned into a casual thing" and the ways in which digital art has changed our lives in the last 30 years.

"Histories of the Post-Digital" will host discussions and workshops every Wednesday between 7:00 p.m. and 9:00 p.m. Curators also planned a set of seminars every Saturday afternoon during the exhibition. Lecturers include Darko Fritz, Sylvie Lacerte, Ekmel Ertan, Oliver Grau, Jussi Parika, Armin Medosh and Christiane Paul. The seminars will take place on the first floor and serve to extend the lifespan of this interesting exhibition.