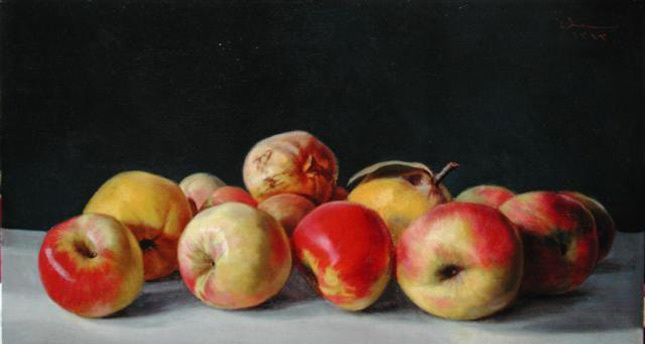 Sakıp Sabancı Museum's painting collection is not just a personal collection inspired by interest in a specific period of Turkish art, but a cultural legacy that provides insight into the early flowering of Western-style painting in Turkey. In this respect, the collection may be regarded as the continuation of the Sakıp Sabancı Museum Calligraphy Collection, reflecting the transformation of visual representation in Turkish art, changing concepts of art and the artist and the process of modernization between the late Ottoman and early Turkish Republic periods, categorizing the artists and their works in accordance with the period.

The period between the proclamation of the Tanzimat Reforms in 1839 and the First Constitution of 1876 witnessed a series of reforms designed to bring about the Westernization of the political, social and economic structure of the Ottoman Empire.

The years from 1839 to 1876 were a time when Ottoman architecture featured a mixture of the baroque, rococo, imperial and neo-gothic styles found in the cities of Europe, Western literary forms like theater, short stories and novels were introduced to Turkish literature and concepts like homeland, nationhood and equality first made their appearance in Ottoman intellectual life. This was a period of innovation in many spheres, painting being one of the most notable. Traditional Ottoman miniature painting which had begun to reflect the growing interest in Western painting in the 18th century, was largely abandoned and in the 19th century in favor of paintings on canvas, particularly portraits, landscapes and still lifes. Ottoman painters like Osman Hamdi and Halil Paşa, who were trained by Western European painters such as Gerome and Boulanger, became interested in portraiture. At a time when Ottoman portraiture was restricted to portraits of the sultans, they were the first to portray ordinary people, above all their own friends and family members. Moreover, their early portraits of women mark the beginning of a new era for visibility for women in Ottoman society after 1839.

The World War I generation

The young Ottoman artists who went to Europe to study art between 1909 and 1910 - principally at the Julian Academy in Paris - were obliged to return home at the outbreak of the First World War and became known as the 1914 Generation. They included such leading painters as İbrahim Çallı, Nazmi Ziya, Avni Lifij, Feyhaman Duran, Namık İsmail and Hikmet Onat, who played an important part in the spread of such genres as landscape and still life in Turkish art. Another striking aspect of their work is the way their paintings reflected their own impressions and personal interpretations. Owing to their pure colors and sensitivity to light, these painters are sometimes described as Turkish Impressionists. Almost all of them were among the first Turkish teachers at the Academy of Fine Arts in Istanbul and were active in training the next generations of Turkish artists.

The Ottoman Society of Painters

The Ottoman Society of Painters was established in 1909 by artists including Ruhi Arel, Sami Yetik, Şevket Dağ, Hikmet Onat and İbrahim Çallı under the patronage of the last Ottoman sultan, Şehzade Abdülmecid Efendi (1868-1944), who was also a painter. The society was an independent body that came into being in the new liberal atmosphere following the proclamation of the Second Constitution in 1908. It was dedicated to spreading interest in art and awareness of painting as a profession in Ottoman society. Later, artists like Feyhaman Duran, Hüseyin Avni Lifij and Müfide Kadri joined the society, which became the first professional association of artists in Ottoman Turkey. Between 1911 and 1914, the society published 18 issues of a periodical titled the Journal of the Ottoman Society of Painters. From 1916 onwards, the society organized the Galatasaray Exhibitions, which became the showcase for new developments in the art world and principally featured works by the 1914 Generation who had returned from Paris. The society was renamed the Turkish Society of Painters in 1921, and later changed its name twice, to the Association of Turkish Fine Arts in 1926 and finally to the Association of Fine Arts. In the 1940s, however, the society went into decline and lost its influential status in the Turkish art world. In June 1914, Aziz Hidayi wrote the following in an article titled "Painting in Turkey," published in the 17th issue of the Osmanlı Ressamlar Cemiyeti Mecmuası (Journal of the Society of Ottoman Painters):

The Independents as the first group in Republican Turkey

The Independents were the first generation of young painters to be taught by Turkish teachers such as İbrahim Çallı, Feyhaman Duran and Hikmet Onat, who were the successors of foreign teachers at the Academy of Fine Arts. The students who went to Europe for further studies in 1924, either on a state scholarship or by their own means, returned home in 1929 and founded the Association of Independent Painters and Sculptors. This was the first society of artists to be established after the founding of the Turkish Republic in 1923. The new group of artists held their first exhibition at the Ethnographic Museum in Ankara in 1928, and the second at the Turkish Association in Istanbul in 1929. The association played a highly influential role in arousing public interest in Turkish painting both at home and abroad. Partially in reaction to the style of the 1914 Generation, whose work had a close affinity with Impressionism, the Independents sought more solid draughtsmanship and form. Although they continued to focus on landscapes, still lifes and figurative compositions, they occasionally portrayed scenes from daily life. Members of the Independents group like Refik Fazıl Epikman, Cevat Dereli, Şeref Akdik, Mahmut Cuda, Nurullah Berk, Hale Asaf, Ali Avni Çelebi, Zeki Kocamemi and Muhittin Sebati are regarded as the generation who laid the foundations of modern art in Turkey.