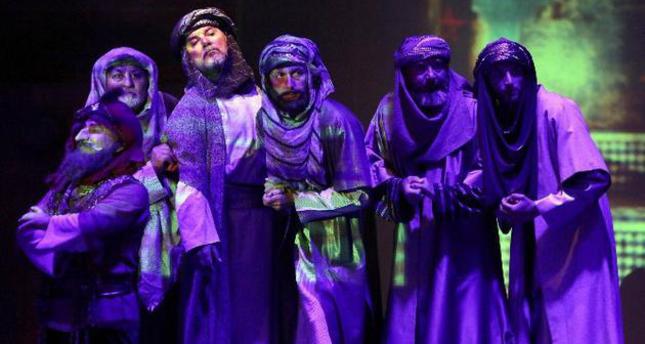 by Daily Sabah Dec 24, 2014 12:00 am
Turkish composer and musician Can Atilla, one of the biggest names in New Age Turkish music, has announced that he will re-arrange the "Karbala" ballet as a suite album that will be released in the upcoming months. Atilla claims to have made a variety of variations, and improvements, on the famous work, which made its world premiere in March at the İzmir State Opera and Ballet. Similar to the work he did on Tchaikovsky's famous ballet "The Nutcracker Suite," Atilla claims to have given "Karbala" a new artistic perspective, while preserving its impact with shortened technical music.

While composing music for the ballet, Atilla comprehensively read up on the Battle of Karbala, which takes a central place in the Islamic world, to avoid any misinterpretations. His suite album reflects sorrow and intensive feelings toward the historic incident. "The Battle of Karbala has a political side. We do not only talk about the beheading of Hussein ibn Ali, but also the emergence of the caliphate and Muawiyah's gold palace in Damascus," he said. Atilla pointed to the difficulty of interpreting the historic battle through dance. "You may explain the situation to the viewers through acting or literature. But it is far more difficult to do the same through dance. I read a lot and took notes for months to figure out how to depict the battle with dance and body gestures. I pondered on creating the same feelings with the eyes or head, arms and hands," he continued. Atilla said the ballet is an attempt to describe the inhospitable nature of Arab geography and drama of the battle through music, aesthetics and art.

Regarding the recent discussions and political initiatives to promote peace with the Alevi community, he additionally claimed that art cannot be used as instrument. To refrain from conflict, the Karbala ballet is not based on interpretations, but well-known facts. "The ballet shows what I felt while reading books on this subject. Now, my new album will do the same thing," he added. Atilla invited all viewers to watch the ballet, highlighting its epic choreography by Mehmet Balkan. "The ballet will receive the expected attention soon and will take its place among other compositions," Atilla said. The "Karbala" ballet was directed by Lale Balkan and its libretto and music was composed by Atilla. Centering on the political and social conflicts on the Arabian Peninsula after the death of the Prophet Muhammad, the ballet depicts the killing of Husayn ibn Ali, the grandson of Muhammad on the battle field. Based on historical facts, the ballet suite was created with a neo-classic musical structure. Aside from the 19th and 20th modern ballet music, the album features the mysticism of the Middle East with period instruments, human voice, epic language and orchestral music.