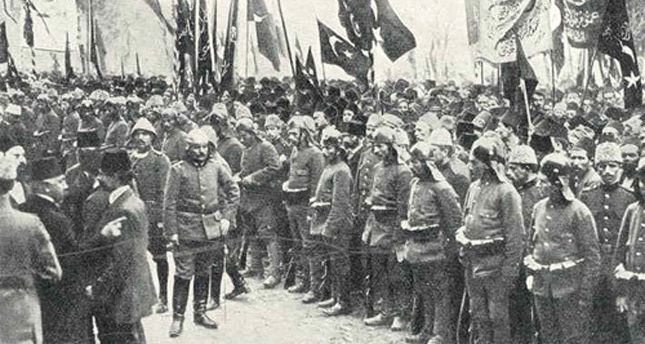 A century ago, on Dec. 13, 1914, Ottoman battleship Mesudiye was sunk by the British submarine B-11. Weeks earlier the Ottoman sultan, acting in the capacity of caliph, had proclaimed jihad after Great Britain and France declared war on the Ottoman Empire. 1915 would be a year of violent wars and confrontations, one of the bloodiest the empire ever experienced. In this atmosphere of violence and madness, another war was waged to win the hearts and minds of citizens living in the Central Front countries, and make them accept the logic of this catastrophic war. Painter Wilhelm Victor Krausz was appointed as a "war painter" by the Austria-Hungarian War Ministry Social Welfare Bureau and sent to Istanbul and Çanakkale fronts where he painted the first known portrait of Mustafa Kemal. The rising star of the Ottoman military signed his portrait, in Ottoman. This painting, "Anafarta Group Commander Colonel Mustafa Kemal," is among dozens of documents, art works and objects on display in "The Propaganda And War: The Central Front During The First World War" exhibition at Koç University's Research Center for Anatolian Civilizations (ANAMED).

The show's curator Bahattin Öztuncay told me how his team meticulously prepared this exhibition over many years. "To bring together medals, postcards, memorabilia, books and photographs, most of which were produced in Germany and Austria, was a process that required patience. War and propaganda are subjects that attracted our interest for a long time. I am a graduate of Austrian High School in Istanbul and Vienna Technical University in Austria. I prepared an exhibition in the Eppstein Palace in Vienna in 2006. An important portion of this exhibition was devoted to the concept of war propaganda. We showed the same exhibition in the Foreign Ministry Gallery in Ankara and in Dolmabahçe Palace."

Öztuncay also edited an excellent catalogue that features essays by Edhem Eldem and Sinan Kuneralp alongside Öztuncay's own introduction. The catalogue features images of all the medals, pins, war memorabilia, postcards, photographs and posters on display at ANAMED. The Ottoman War Medal is among the most interesting of those items. According to the catalogue, the medal "could be understood as a very successful graphic translation of the German Iron Cross. The Ottomans did not go as far as calling their medal the Iron Star (Demir Yıldız), but the Germans did so in their stead; in German, the Ottoman War Medal was colloquially called the Eiserner Halbmond or Iron Crescent."

With hindsight, images of Ottoman and German military officials shaking hands and congratulating each other for their doomed alliance look quite chilling in our day. In one propaganda image, German, Austrian and Turkish boys climb a war cannon, waving their flags as symbols of the brotherhood between the three empires. Another image shows views of Berlin, Vienna and Istanbul next to portraits of their monarchs and their imperial coats of arms. The towering figure among those officials is the Ottoman Minister of War Enver Pasha, who at the age of 34 was perhaps the most powerful man in the empire, having served as the architect of the Ottoman-German Alliance. Enver Pasha's image appears on numerous periodicals, newspaper clippings and you can watch him in the video installation titled "Der Kaiser bei unseren türkischen Verbündeten" which shows the Kaiser visiting landmarks of the empire including the Hagia Sophia, the Galata Bridge and warships. Another fascinating document in the exhibition catalogue is the Ottoman Caliph's call for jihad, which was thought to help the alliance win the war.

Öztuncay told me how little affect war propaganda had on the subjects of the Ottoman Empire. "The number of people who were literate and who could read periodicals was very low. After all, this was a society whose literacy rate was less than 10 percent in the war years. The reason behind the creation of these propaganda tools was to show Islam and Turkish people as sympathetic as possible to German and Austrian citizens."