An extensive calligraphy and book arts collectıon at Sabancı museum 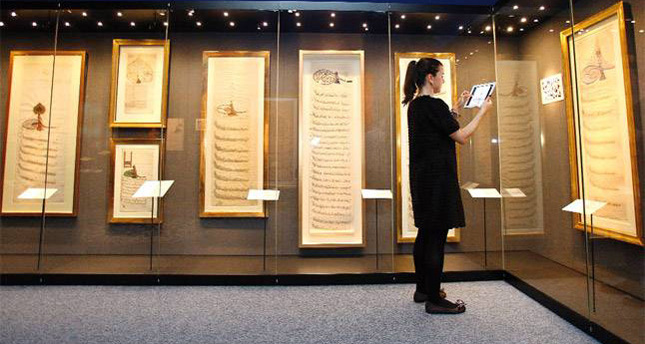 Sakıp Sabancı Museum showcases the ‘Collection of the Book Arts and Calligraphy,’ with an understanding of contemporary design and exhibition. Visitors are invited to a different museum experience that blends traditional arts with technology through interactive applications offered by animations in the exhibition halls which have been prepared using an augmented reality technique

The exhibition of the Arts of the Book and Calligraphy at Sakıp Sabancı Museum (SSM), which features over 200 works of well-known calligraphers and book artists from the 14th to the 20th century, consists of illuminated Qurans, prayer books, calligraphic compositions, albums and panels written by well-known calligraphers, illuminated official documents bearing the imperial cipher of the Ottoman sultans, as well as calligraphers' tools. As the collections and archives of SSM have been transferred onto a digital platform, the rare manuscripts of Turkish and Islamic arts can be studied page by page. Visitors are able to access these applications with iPads given to them for use by the museum. SSM, which intends to bring the traditional arts into the present, includes original works of contemporary artists in its collections. In the new presentation of the collection, a calligraphic composition from 2005-2006, which makes a reference to Ahmet Oran's writing exercises, welcomes the visitors. The 2009 production video by a renowned contemporary artists of Turkey, Kutluğ Ataman, which he created with a contemporary perspective, resembles symmetrical writing compositions of calligraphy called "aynalı." Moreover, the catalog in Turkish and English is presented to those who want to study SSM's "Collection of the Arts of the Book and Calligraphy" closely. Within the scope of the exhibition, the film which was shot in collaboration with Mimar Sinan Fine Arts University, aims at to provide insights into the production stages of handwritten books.

A Quran copied by Abdullah Herevî in 1441-42, probably in Samarkand, and a 20-page Quran section dated circa 1440, probably copied in Bursa, are among the earliest items in the collection. Another outstanding Quran dated circa 1500 is illuminated in the palace style. An En'am-ı Şerif consisting of selected surahs from the Quran in muhakkak and nesih scripts is an example of Abdullah Amasi's (d. after 1492) calligraphic style, which was to exert a strong influence on future Ottoman calligraphy.

From the 18th century onward, calligraphic panels called levha, designed for hanging on walls, replaced books as the main medium for Ottoman calligraphy. This new trend led to innovative writing techniques, since the scale of the lettering required for these large calligraphic panels was far larger than that used to copy books. Exhibited here are signed levhas by noted masters of this form, Mustafa Rakım, and his contemporary Mahmud Celaleddin. Sultan Mahmud II, who studied calligraphy under Mustafa Rakım, also wrote inscriptions in the magnified form of sülüs called celi sülüs. A levha by this sultan, which was the first calligraphic work purchased by Sakıp Sabancı, is exhibited here.

Works dating from the 19th century in the collection include Qurans, prayer books, kıt'as, murakka albums and levhas that demonstrate different aspects of the art of calligraphy at its finest. Qurans dating to this period were sometimes illuminated in a traditional style and sometimes in the western-influenced style known as Turkish rococo. The 19th century works in the collection also include a Quran with calligraphy by Mehmed Şevki (d. 1887), dated 1862-63 and illumination by Hüseyin; a Quran copied by Ahmed Ârif (d. 1909) and illuminated by Derviş; a Quran copied by Mehmed Hilmi (d. after 1869) and illuminated by Hüseyin Hüsnü; an En'am-ı Şerif illuminated by Seyyid Ahmed; and a collection of surahs illuminated in Turkish rococo style by Ahmed Zihnî and probably also bound by him. Richly-decorated murakkas (calligraphic albums) were produced during this period.

The Sakıp Sabancı Museum collection includes divits (cylindrical pen boxes with attached inkwells that calligraphers used to carry their writing materials around with them), paper shears, mühres (polishing stones used to give sized paper a smooth, flawless surface and polish gilding), reed pens, penknives and maktas (tablets with grooves on the top used to split the nibs of reed pens), and writing boxes in which all this equipment was stored. Notable among the latter is a writing box with landscapes painted on the inside and outside of the lid. These landscapes reflect western influence on Ottoman art that began in the 18th century, and are small-scale versions of landscapes featured in baroque style interior decoration in this period.