2014 the year of Polish art in Turkey 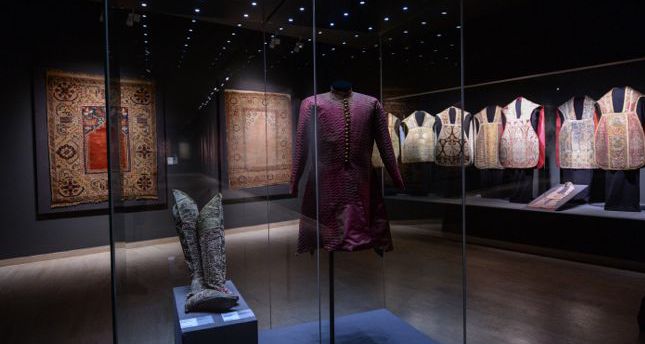 by AA Jan 02, 2015 12:00 am
The extensive cultural program that took place in 11 cities and in collaboration with 44 institutions reached nearly 800,000 people and was mentioned as one of 2014's most-discussed programs in Turkish media. Art lovers had the chance to attend almost 160 cultural events, including 19 film screenings, 34 theatrical performances, 30 visual art exhibitions, five design workshops and 23 classical and 45 jazz and contemporary music concerts. With the aim to promote Polish culture at international platforms, many Turks enjoyed the opportunity to closely examine Polish art. The colorful and rich program provided a taste of different fields from visual and performance arts, gastronomy, design, contemporary music, classical music and cinema. A number of famous Polish musicians and directors including trumpeter and composer Tomasz Stanko, director Grzegorz Jarzyna, who specializes in contemporary theater, director Krzysztof Zanussi and composer and conductor Krzysztof Penderecki were some of the guests of the celebration's events. Selected films of legendary Polish directors Krzysztof Kieslowski, Adnrzej Wajda and Roman Polanski were screened as well.

Among the most popular events, the Polish Poster Week that was held in Ankara and Istanbul attracted 66,000 visitors. The "Distant Neighbor Close Memories: 600th Anniversary of Turkish-Polish Relations" exhibition, organized by the Sabancı Museum from March 7 to June 15, was the next most-attended event with 41,429 visitors. The exhibition explored a period beginning in the first half of the 15th century and up to the late 17th century when the Second Siege of Vienna became a turning point in the relations between Ottoman Turkey and Poland as well as in European history. Moreover, it showcased 480 works of art assembled from the collections of 39 important institutions. Aside from these, nearly 9,000 people attended the classical music concerts that were part of different festivals in Istanbul, Ankara, Antalya and İzmir. Back in February, Istanbul Modern presented a special film screening of "All About Kieslowski," which was viewed by 2,500 people. Ranging from the director's early career to the Decalogue, a 10-film series depicting the Ten Commandments, 48 films demonstrated Kieslowski's narrative and attention to detail.

Other cultural events continued in different Turkish cities. For instance, Biuro Podrozy Theater staged a theatrical street performance "Carmen Funebre" while the Warsaw-based Academy of Fine Arts held an exhibition on Turkish textiles in Bursa. As part of the Akbank Jazz Festival, Polish avant-garde musical group Cukunft gave concerts in Adana, Eskişehir, Kayseri, Gaziantep, Çanakkale and Denizli as well. Deputy president of the Adam Mickiewicz Institute and the coordinator of the institute's projects for Turkey, Olga Wysocka, said in a statement that the rich and comprehensive cultural program illustrates the similarities between Turkish and Polish culture. "Although diplomatic relations are very important, culture is what brings people closer together. As the cultural programs coordinator, the Adam Mickiewicz Institute began the preparations for the 600th anniversary two years ago and gave every effort to schedule the 12-month program. We worked to introduce Polish culture to Turks by connecting institutions and artists," Wysocka said. The digital platform turkiye.culture.pl actively promoted the celebration's events on the Internet. All cultural events were circulated on social media platforms for those interested in Polish culture, and the website, available in three languages, has 25,000 individual users and was visited 108,000 times last year. Culture.pl's Facebook account now has more than 362,488 followers. Offering extensive information regarding Polish art and culture, a new version of the website will be available when the program ends.

This month, Polish art will continue to be on display at three exhibitions. The "Orientalism in Polish Art" exhibition at Pera Museum will be open until Jan. 18. The displayed works highlight the orientalist trend in Polish art including drawings and graphic arts. Curated by Sebastian Cichocki and Galit Ertan, "Rainbow in the Dark" aims to present an investigation of contemporary culture and examines the recent growth of religious populism at SALT Galata in Istanbul and will run until Jan. 17. Lastly, the Istanbul Photography Museum is hosting another exhibition titled "Frederic Chopin and His Nostalgia in Tomek Sikoras Photography" until Jan. 2. The exhibition premiered in Warsaw four years ago and pays homage to famous Polish composer Frederic Chopin.