Painting and sculpture in harmony 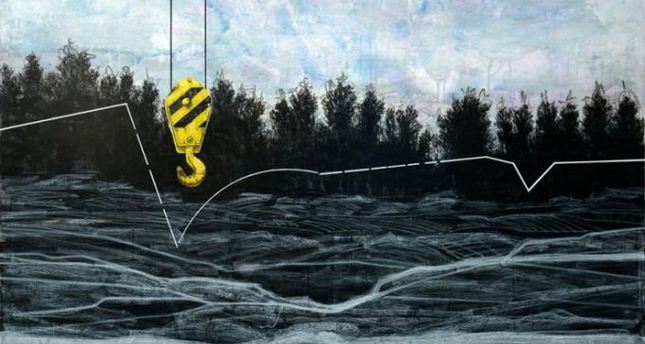 Bozlu Art Project presents its first exhibition of 2015 with a painting and sculpture collection by Utku Dervent and İlker Yardımcı between Jan. 21 and Feb. 21

Inspired from Polish author Jerzy Kosinski's "Being There," the exhibition of the same title makes references to different concepts such as timelessness, comprehension and explanation of the reality or sharing a metaphorical place, "the garden". Although varying in shape and dimension, Dervent and Yardımcı's works show structural harmony, while highlighting harmonization and contrasts among different disciplines of art.

The exhibition "Being There" departs from the argument that in communication process, what is said by the sender is also belongs to its receiver. In other words, each work of an artist acquires new perspectives and expressions with its viewers. Dervent and Yardımcı question contrary perspectives of image world whose components gather under undefined place and time.

For many years, Dervent creates his works based on the relationships between structure and space; and light and color. He questions how integrity, harmonization and balance are achieved through abstract geometric works. Figures are the most attractive part of his artistic process. For him, figures avoid the impact of limitation in his art, which are inevitably seen when well-known objects are used or due to the constraints of proportion.

On the other hand, Yardımcı tries to create a perception of communication based on sense and without words. He uses the contracts and interactions of basic forms on his works. Yardımcı intends to design a dynamic category while benefitting from the static world of sculpture. The two Turkish artists form abstract geometric works and focuses on the metaphor of "garden," which is given the meaning of "the desired place."

Born in Istanbul, 1967, Dervent graduated from the Mimar Sinan Fine Arts University Painting Department. He was given a success award at the 29th DYO Painting Competition in 1999. In the same year, he began his academic career at the Yıldız Technical University followed at the International Cyprus University, the Kadir Has University and the Istanbul Aydın University. As mentioned earlier, his works reflect the relationships between space and structure; and light and color. He mostly questions the basic concepts of art including balance, harmonization and integrity in his abstract geometric paintings. Dervent tries to eliminate the restrictive impact of such relations from his works. The symmetric formation on his works is the reflections from his architectural education and previous studies in the field of decoration and interior design. He fictionalizes abstract painting within the limitations of geometric possibilities. Dervent has attended various solo and group exhibitions and gives lecture at the Yeditepe University as assistant professor.

Yardımcı, who was born in Konya, 1974, graduated from the Dokuz Eylül University Fine Arts Faculty Sculpture Department. He generally questions the place of metal materials and how they can be expressed on art. His metal sculpture "Prizmanın Telaşı" (The rush of Prisma) was among the 26 international projects selected for "the 2008 Pekin Olympic Games City Sculptures Competition." Yardımcı's works create a perception of communication based on the basic forms of interactions and contradictions. His sculptures are added to many private and institutional collections. The artist has attended many international and local exhibitions, fairs and biennials so far. His sculpture "Lirik İleti" (Lyric Message) came second at the EXPO Sculpture Park Competition held in China's Qingdao city in 2014. Again last year, his other work "A-Lone" ranked fourth at the International Sculpture Biennial in Argentina's Chaco city held from July 12 to 30. Yardımcı is currently the head of the Düzce University Arts and Design Faculty Sculpture Departments and gives lecture as assistant professor.