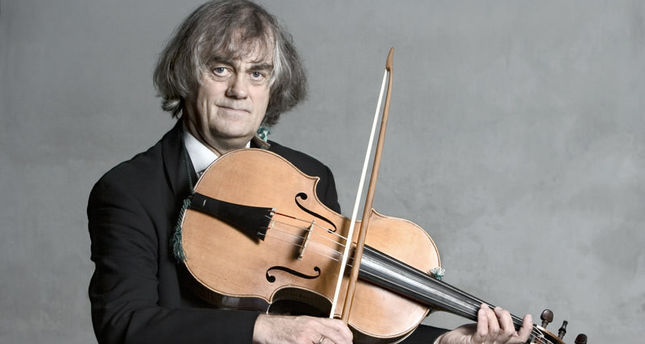 by Gülşah Dark Jan 13, 2015 12:00 am
Since 2011, the "Bach Before and After New Year" concerts have been organized at Istanbul's venues including St. Anthony of Padua Church and the Neve Shalom Synagogue. Following French harpsichordist Benjamin Alard's concert in December, the concert series continue with the Thomas Gabriel Trio and the Belgian violinist Sigiswald Kuijken. The Neve Shalom Synagogue will resound with vivid melodies and dancing rhythms of baroque music with musicians from Europe next week and also in February.

The Bach Before and After New Year concerts will continue with Thomas Gabriel Trio at Neve Shalom Synagogue, which was built in 1951 in Istanbul's historic Galata Neighborhood. The group members - Thomas Gabriel on piano, Gunnar Polansky on double bass and Martin Klusmann on bass - have been interpreting Bach's masterpiece with jazz arrangements for more than 30 years. Gabriel, Polansky and Klusmann met at the Folkwang School of Music, Dance and Speech in Essen and formed the trio. In 1999, they released their album "Bach Jazz," featuring concertos for harpsichord. Their arrangements create a sensitive balance between Bach's music and the trio's unique improvisations. The harmonic and architectonic structure of the original piece is always preserved, but listeners come up with an appealing combination of baroque music and jazz. The Thomas Gabriel Trio has performed in Germany and other countries, and has won the Essen Culture Award. The group members have already demonstrated their success on organ, harpsichord and kettledrums, but are searching for a change in church music to make it more enjoyable. The trio previously appeared at the Cemal Reşit Rey Concert Hall and St. Anthony of Padua Church as part of Bach Days in 2013.

Next month, the Neve Shalom Synagogue will introduce master violinist, violist and conductor Sigiswald Kuijken. Having started music at a very early age, he studied violin in Bruges and Brussels. Seen as one of the most important modern performers of baroque music, Kuijken played a significant role in the re-establishment of Baroque violin playing techniques. He founded La Petite Bande, a period-instrument orchestra, in 1972 and the group made a worldwide impression. Last year, he was the guest at the St. Anthony of Padua Church as a part of the 11th Istanbul Bach Days with French harpsichordist Benjamin Alard and soprano Marie Kuijken. Utilizing 17th and 18th century performance techniques, he introduced an interesting way of playing the violin. The instrument was no longer held under the chin, but lay freely on the shoulder. The senior violinist has worked with many other musicians including Gustav Leonhardt, Frans Brüggen and Robert Kohnen. The concert will take place on Feb. 26.