A Journey of love: The art of marbling 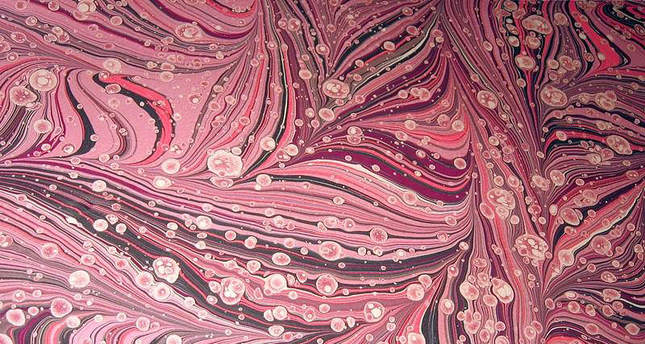 Firdevs Çalkanoğlu, whose marbling work decorates Abdul-Qadir Gilani’s tomb in the Iraqi capital of Baghdad, said that the art of marbling (ebru) is in its golden age

The art of marbling (ebru), which is brought to life with paper, water, soil, paint, tragacanth and a rose branch by master artists, was cherished by Hatip Mehmed Efendi and Ethem Efendi during the last period of the Ottoman Empire. After the Republic was declared, this distinguished art flourished at the hands of artists such as Necmeddin Okyay and Mustafa Düzgünman. This art form, which gives shape to water, was passed down to future generations through the works of calligraphist and marbling artist Fuat Başar, Alparslan Babaoğlu and many others.

Firdevs Çalkanoğlu, a student of Başar who was granted a Living Human Treasure Award by UNESCO, began her artistic journey in 2003 and made a name for herself very quickly. "Currently, I can apply more than 30 flowers at a time," she claimed, before talking about how she began to show an interest in the art of marbling. "My original profession and education was accountancy. However, this profession could not feed my soul and satisfy my heart. If there is love of art in your heart, that is all you need. Before I took up marbling, I was interested in art as an amateur. When I encountered the art of marbling, I knew that I could not go back to working as an accountant. After I met Fuat Başar, I understood that marbling is a deep and beautiful art. I was lucky to work side-by-side with a great teacher," Çalkanoğlu said.

The artist first discovered the art of marbling in a book. However, back then, she had no idea that this art could be taught to others. "It was an elegant and impressive art form that I saw on the covers of old books," Çalkanoğlu said, adding that she enrolled in a marbling course as soon as she learned marbling was a teachable art form.

When she picked up the brush and released the paint into the marbling tank on her first day of the course, Çalkanoğlu knew that she could pull it off. "I fall under art's spell," she said, describing her feelings.

Çalkanoğlu does not perform the art on request. She said that marbling depends on inspiration and what marbling tank she is ready to work with. "Actually, reason and heart are related to each other when it comes to art," she said. "Reason is a very important element in art. Intelligent people turn out to be excellent artists since it is crucial to use the mathematical technique and the golden ratio in art. There has to be a balance in the color combination because not every marbling work is easy on the eyes. It is not only an expression of heart; the heart and reason should work together," she said. Çalkanoğlu drew attention to the unpredictable features of art of marbling as well. "Sometimes I apply a flower pattern that I had thought about for two years in only one hour, while sometimes I cannot perform anything although I design it in my mind for months. Honestly, I perform the marbling of my heart; my night, my day, everything in my life is about marbling." The artist also commented on the recent discussions about new marbling techniques and the classical style. "When I first started to perform the art of marbling, I learned the traditional techniques. My mentor is an artist who valued the old ways, so I became the artist that I am today by following in his footsteps. After 2008, I began to try new approaches and techniques in my work mainly because of the inspiration I received from marbling artist Yılmaz Eneş. With him, my view of the flower forms, the colors and the art changed," Çalkanoğlu said. She had performed marbling the way she had learned it from Başar, but changed her style and tried new things. "It is normal to learn the classical techniques and create works similar to your mentor in the beginning and produce new works in accordance with your desire and enthusiasm," she added. Commenting on the teacher-student relationship, the artist claimed that students can go beyond their teachers. However, some teachers cannot be exceeded. "I have 100 marbling students. If they all become more successful than me, I will take pride in it. It is like a dream, but I wish the same thing for all my students. If they sweep away my work with their outstanding art, I do not see this as a rivalry. However, it is a rare thing in the world of marbling art," she stated. Stressing that Başar always supports her, Çalkanoğlu said, "While I was trying my first flower designs, I asked for my teacher's opinion - whether he would approve it or not. He supported me and said, 'In order for this art to improve, everyone should bring something new.' He always encourages me."

Emphasizing that every art form is a kind of therapy, the artist said that the art of marbling is a little different from other art forms in that regard. "The art of marbling is unique; it is nothing like painting," she said, and claimed that marbling is a magical world on water that drags its performer into another dimension. "Of course, this does not apply to everybody. Once you love marbling and begin performing it, you cannot stop. You are playing with colors; the only thing that is on your mind is how to make your art more beautiful. You do not do anything that can harm other people. The artist brings nothing but good things to society," she said. Çalkanoğlu stressed that marbling has an authentic pattern and the flower patterns look like they are pressed between the pages of a book. No matter how hard the marbling artists try, they cannot add any perspectives to the flowers on marbling. "This is what makes the art of marbling more desirable. You cannot imitate nature with marbling, and the marbling that is performed at one time cannot be repeated. I would paint the flower like a painting if I could, but there is no way," she said.

Although Çalkanoğlu's marbling works are featured in priceless collections all over the world, she has no idea where her some of works are. "One of my works was gifted to Abdul-Qadir Gilani's tomb in Baghdad. I found this out after the gift was presented, but I was happy beyond words," she said. As Gilani's favorite flower was the lilac, Çalkanoğlu's work featuring a lilac was placed in the tomb. "It is a great pleasure for me to see one of my works in the tomb of such an important individual. I believe we bonded by heart, as my marbling work decorates his tomb," she said. As a principle, the artist does not give the names of the collectors and palaces that purchase her marbling works. Çalkanoğlu is holding a marbling exhibition titled "Muhabbet" (Love) until Jan. 31 at Dolmabahçe Art Gallery. The exhibition displays 100 works of Çalkanoğlu along with works of 18 of her students. Her first two marbling works with flower patterns are also on display. "I am at the bottom of the artistic ladder," Çalkanoğlu said. "While my teacher, who has been performing this art for 40 years, still says that he is on the shore of art's sea, it is not possible for me to claim otherwise. In fact, the one who says he or she has achieved everything in art is artistically dead. Although I create beautiful things technically, there is no such thing as being at the top of my artistic career."