Sultan Abdülhamid’s medal of compassion to be auctioned 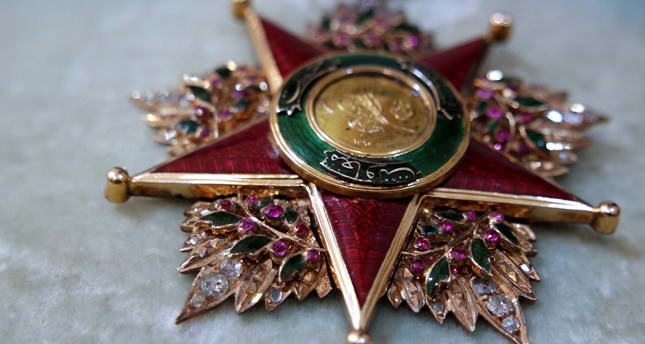 by Daily Sabah Jan 26, 2015 12:00 am
Given for the first time to British Ambassador Sir Henry Layard's wife, Lady Mary Layard, by Ottoman Sultan Abdülhamid II for her outstanding aid to refugees during the Russo-Turkish War of 1877-1878, the Şefkat Nişanı (Medal of Compassion) is currently exhibited in a window display at a jewelry store in Bursa.

However, the medal will soon be sold at an auction. In his statement, Bursa-based jeweler Murat Akça said that the Medal of Compassion was first bestowed in 1878 during the reign of Abdülhamid II to women who were dedicated to charity. Noting that the medal was given to the wives of diplomats, queens and princesses in the following years, Akça said, "This medal was presented to Lady Layard, the wife of a British Ambassador, for the first time in Ottoman history."

The golden medal is ornamented with diamonds, emeralds and rubies, and features the tughra (sultan's signature) of Abdülhamid II in the center. Also the words "humanity," "aid" and "charity" are engraved on the medal's green frame in Ottoman language.

The medal is considered to be one of the most precious prizes in the Ottoman era, which was not taken back after the owner died. Akça emphasized that the medal is worth TL 50,000 ($21,177). "Although some people want to buy it, we will put the medal up for auction in Istanbul through an auction company," he informed.

The star-shaped medal, which was given to distinguished women, bears the signature of Abdülhamid II in the center along with 1879 written beneath it. The medal, which was also granted to poet Nigar Hanım, Fatma Aliye Topuz - the first female novelist of Turkish literature - and Halide Edip Adıvar, is tied with a crescent-shaped ribbon.