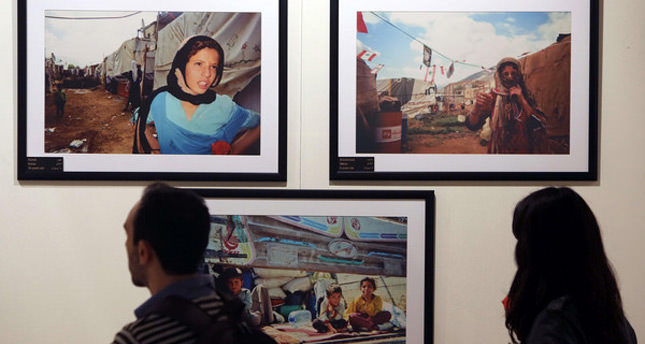 by Anadolu Agency Jan 29, 2015 12:00 am
An exhibition featuring photographs taken by Syrian children was opened in Beirut, the capital city of Lebanon. Organized in collaboration with the United Nations Children's Fund (UNICEF) and the Image Festival Association (ZAKIRA), the exhibition puts 140 photographs on display. The works that are showcased at the exhibition at Beirut's City Theatre were selected among thousands of photographs taken by 500 Syrian children between ages seven and 12 who live refugee camps around Lebanon. Soha Bsat Boustani, UNICEF Press Office representative, told Anadolu Agency correspondent that they began preparations around one and a half years ago.

UNICEF and ZAKIRA visited the refugee camps around the country and selected several Syrian children for the project and gave them amateur photography education. "The photos that the children took are marvelous," Boustani said. "They describe the problems and their lives after fleeing from their homeland." Stressing that they selected 140 photographs among thousands of works by Syrian children reflecting the problems of Syrian refugees, Boustani stated that the aim of this exhibition is to give the message "let's find a solution so that the children can go back to their childhood." According to the numbers of The UN Refugee Agency, there are over one million Syrian refugees in Lebanon. On the other hand, Lebanese authorities claim that this number has reached to 1,700,000.