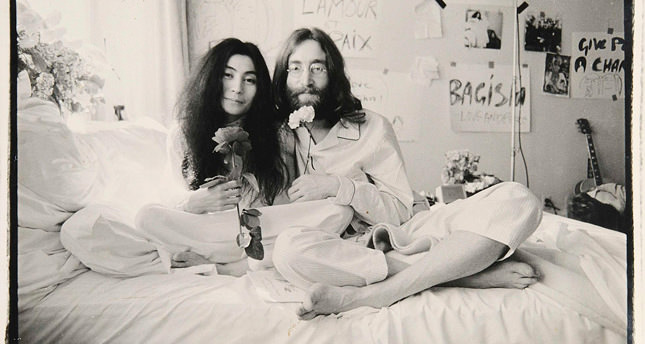 by İklim Arsiya Jan 30, 2015 12:00 am
Yoko Ono (b. 1933) is one of the most influential Japanese multimedia artist, singer, peace and anti-war activists in history, also known as the wife of Beatles legend, John Lennon.

Multimedia artist and performer Yoko Ono was born on Feb. 18, 1933, in Tokyo, Japan as the eldest of three children born to Eisuke and Isoko, a wealthy aristocratic family. Shortly before Ono was born, her father, who worked for the Yokohama Specie Bank, was transferred to San Francisco, California. When Ono was two years old she reunited with her father for the first time in San Francisco. Soon afterward, however, the whole family returned to Japan to escape the wave of anti-Japanese sentiments and internment that swept the U.S. following the Japanese attack on Pearl Harbor.

Ono spent her childhood in war-torn Japan, where air raids were a frequent occurrence. She started playing piano almost as soon as she could walk. At a young age, she showed an aptitude for music, performing her first public concert at the age of four.

Ono was an excellent student. In 1952 she became the first women admitted to study philosophy at Japan's Gakushuin University. In 1953, the Ono family moved to New York City and Yoko enrolled at the prestigious Sarah Lawrence College. It was here that she met her first husband, Toshi Ichiyanagi, who was a music student at the leading music academy Julliard. After dropping out of Sarah Lawrence College she became involved in the Fluxus movement led by New York conceptual artists including George Maciunas, La Monte Young, Diane Wakoski and Walter De Maria. During the early 1960s Ono's work was exhibited and performed at the Village Gate, Carnegie Recital Hall and numerous New York galleries. It was at one of these exhibitions that she met John Lennon, her third and final husband.

She first met John Lennon of The Beatles on Nov. 9, 1966 when he visited her exhibition at the Indica Gallery in London. Lennon and Ono were instantly attracted to each other. Lennon was especially taken with the positive and interactive nature of her work. Ono and Lennon got married on March 20, 1969 and soon collaborated in art, film and music projects and became famous for their series of "conceptual events" to promote world peace. They held their first "bed-in for peace," in the presidential suite of the Amsterdam Hilton for their honeymoon. This peace movement was the first of several political causes the couple would take up over the years, but it was one that generated the most publicity. Ono and Lennon continued their peace campaign with speeches to the press such as: "War Is Over! If You Want It." Their speeches were erected on billboards in 12 cities around the world including Hollywood, New York, London and Toronto.

Aside from the peace campaigns the couple started making music together. Soon after their wedding, Lennon and Ono released their album "Unfinished Music No. 2: Life With The Lions." Later, the album was followed by "The Wedding Album." After the birth of their son Sean Taro Ono Lennon on Oct. 9, 1975, Lennon dropped out of show business in order to spend time being a father. Meanwhile, Lennon was working quietly on a comeback album, "Double Fantasy," which was released in 1980. An unexpected tragedy struck the family on Dec. 8, 1980 when Lennon was shot seven times by Mark David Chapman, a 25-year-old Beatles fan on his return to their Dakota apartment in New York City. At the time of his death, Lennon was holding a tape of Yoko Ono's "Walking on Thin Ice" in his hand.

Following Lennon's tragic and untimely death, Ono continued her solo music career as well as exploring new directions in her art and life. Lennon's newly released album, "Double Fantasy," won the Grammy for Album of the Year. Ono expressed her grief in music with the release of her disturbing album, "Season of Glass," in 1980, which had a picture of Lennon's cracked and bloodstained glasses on the cover. Over the years Ono resumed her former career as a visual artist and returned to creating art installations as well as pursuing a newfound interest, photography. She later started exploring new directions in performance and wrote a musical called "New York Rock," which was launched off Broadway, and in 2005 she published a book, "Memories of John Lennon."

In March 2011, the 78-year-old made history as the oldest artist to have a number one dance hit with her single "Move on Fast." This marked her eighth number one in the dance charts since 2000. Her songs have been reworked by artists including Basement Jaxx and the Pet Shop Boys. The same year Ono issued "Yes, I'm a Witch," which is another, less dance-oriented remix featuring reworking by Peaches, Le Tigre, Cat Power and Spiritualized's Jason Pierce. Ono has also continued to honor Lennon's memory with a number of different projects. On Oct. 9, 2002, she inaugurated the Lennon Ono Grant for Peace Prize to commemorate what would have been Lennon's 62nd birthday. On Lennon's birthday in 2007, she unveiled the "Imagine Peace Tower on Videy," an island in Iceland. This outdoor artwork represents her and Lennon's commitment to world peace.

Today in 2015, Yoko Ono, the pioneering conceptual artist, musician, performer and activist, is 81 years old and as she said in an interview with The Guardian, "I feel that I am starting a new life, a second life."