Armenian artist to have Turkish pavillion at Venice Biennale 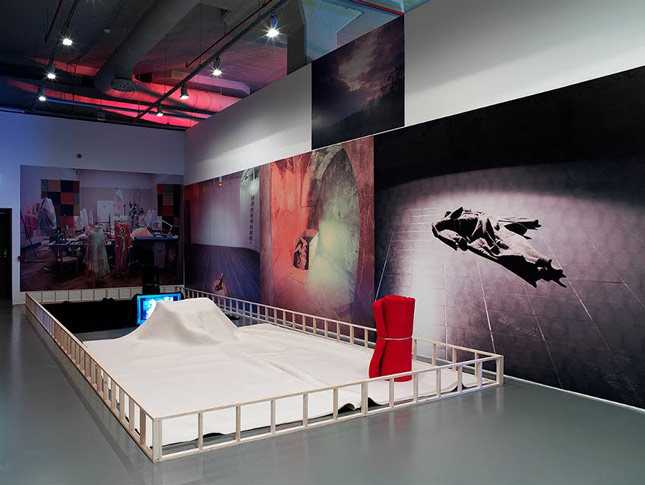 Turkish-born Armenian conceptual artist Sarkis Zabunyan’s work will be showcased at the 56th edition of the International Venice Biennial under the title ‘Respiro,’ which means ‘breath’ in Italian

Curated by Defne Ayas and coordinated by the Istanbul Foundation for Culture and Arts (İKSV), the installation of Sarkis, titled "Respiro", will be displayed at the Turkish Pavilion from May 9 to Nov. 22. The Turkish Pavilion will be at the Sale d'Armi building in biennial's main venue Arsenale. The outline of the Turkish Pavilion of the 56th International Venice Biennial was announced during a press conference at the Salon İKSV on Feb. 10 with the participation of artist Sarkis and curator Defne Ayas. "We will go back to the beginning of time, the first rainbow in other words, the first time when the light broke. Instead of being fixed to certain moments in history, we will make a claim to today and ancient history at the same time. We will continue to transform as opposed to being stable, we will convert, breathe and make people feel," Sarkis said about the project during the press conference.

Through his project, titled "Respiro," which means "breath" in Italian, the artist will arrange for the Turkish Pavilion to be set up as a theater stage. Sarkis will put objects and visuals together with thoughts and codes and continue to examine the idea of eternal dialogue and the transformation that creates the essence of his artworks. The installation will be composed of mirrors, stained glass boards and neon lights that will be authentically produced for the venue alongside a composition by Jacopo Baboni-Schilingi, which is influenced by the seven colors of the rainbow, will complete the atmosphere.

Curator Ayas said that Sarkis is one of the rare artists who can present their stance on art and the universe. "Considering the uncertainties of the present day, Sarkis' masterpiece is a fresh suggestion to evaluate the history of humanity. 'Respiro' will give a new momentum to art's potential and offer a new space for us. The architectural editing, signals that are encoded to stained glasses and hidden frames will probably bother us at first however, we will have a chance to recover with the light. Sarkis' rich accumulations, art's power of transformation, its timelessness, are what give us hope," Ayas depicted the artist's installation.

The announcement, which heralded that the installation of Sarkis, who has been living in Paris since the 1960s, will represent Turkey at the 56th International Venice Biennial, caused a stir in art circles. It is important that an important artist like Sarkis will open the permanent Turkish Pavilion in the biennial. On the other hand, there is a political side about the artist's installation. While the disputes are heated over the 100th anniversary of 1915 incidents, it is important for Turkey to host an Armenian-origin artist at its national pavilion. Moreover, Sarkis will also participate in the group exhibition at the Armenian Pavilion. During his interview with Hürriyet, a Turkey-based daily newspaper, the artist said he had been waiting for an invitation to the Turkish Pavilion for the last nine years and since the invitation came in 2015, it has left a question mark for many. "This is a first in history," said Sarkis during his interview. "There is no other artist who has experienced such a situation. That is why I referred to Tarkovski during the press conference. I saw how history got out of hand when brother killed brother and how he tried to get everything right during his lifetime. We have been stuck and locked for a century; we need to get loose and breathe. This lock should open through the language of art. This idea exploded in my mind. I felt that we need to work on this idea to improve it."

Sarkis also offered an insight into the effects of exile in 1915 on his family, "Both my parents lived during those days. They experienced the exile," he said. According to Sarkis, his father stopped talking after the exile. "He passed away without even uttering his mother's name." Although the artist's mother talked, his father lived all through those times in silence. He lived as though he had no tongue."

On the other hand, Sarkis believes that there is progress regarding the Armenian issue. "The books that are being published and the existence of Hrant Dink, the Armenian-origin journalist, who was assassinated, are very important. Personally, I learnt so much from him," the artist said. He said he does not consider himself from the diaspora because of his devotion to his mother. "My mother lived and died as an Anatolian woman," he noted, adding he still protects her house. He went on, "Dink said 'Diaspora is a huge village in Anatolia.' This is a beautiful image. This gives us hope. It does not mean that there will not be other attacks against us. We should be prepared for these kinds of things. We have never talked about these things among us but I think there might be fanatical people."

Graduating from Mimar Sinan Fine Arts University, Sarkis introduced his first exhibition in 1960 at the Istanbul Art Gallery.Although he performed different forms of art throughout his career, he became an installation icon at the end of the 1960s. The artist's works have been displayed at many exhibition venues, museums and biennials including Centre Georges Pompidou in Paris, Guggenheim Museum in New York, Musee d'Art Moderne de la Ville de Paris, Kunst-und-Austellungshalle in Bonn, Germany, Louvre Museum in Paris, Bode Museum in Germany's capital city Berlin) and Kunsthalle Düsseldorf.