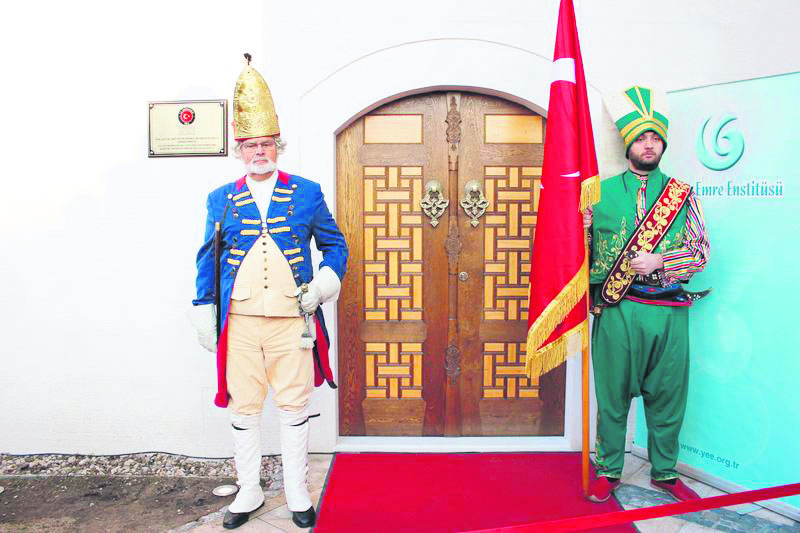 by Anadolu Agency Mar 02, 2015 12:00 am
A large crowd welcomed the exhibition sponsored by the Turkish-Islamic Union for Religious Affairs (DİTİP), entitled "Turkish, Afro-American and Tatar Muslims in Prussia," which recently opened in Berlin's Şehitlik Mosque Culture House. During the opening ceremony, the mehter (Ottoman janissary) band gave a special performance and a Quranic recitation session was held. The exhibition imparts the message that Islam is a part of Germany and people from different cultures can live together. Speaking at the opening ceremony, Hüseyin Avni Karslıoğlu, Turkey's ambassador to Berlin, said that everyone, no matter whether they are religious or not, should practice tolerance. "What you believe in or what you do not believe in is not important," he added. Karslıoğlu said the opening ceremony gathered visitors from different religions, cultures and political views, which should be seen as a sign of cultural richness. "This is the power of Germany and Berlin. Such beautiful events will continue as long as we can maintain our cultural richness and everybody can live here without fear," he continued. Nevzat Yaşar Aşıkoğlu, the General President of the DİTİP, highlighted the importance of the event for the two nations. "I hope the exhibition will contribute to the cooperation between Germany and Turkey," he said. Social Democratic Party of Germany (SDP) Deputy Fritz Felgentreu, SDP Berlin State Council Member Raed Saled and newly elected Neukölln Mayor Franziska Giffrey said that Islam is a part of Germany and the exhibition functions as a bridge between different religions.