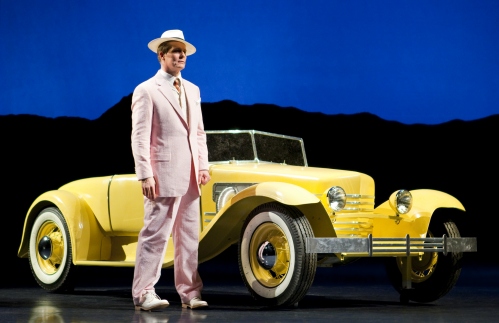 by Damla Kayayerli Mar 09, 2015 12:00 am
F. Scott Fitzgerald's famous novel "The Great Gatsby" has been adapted to live theater and the silver screen many times. The novel, which marks its 90th anniversary this year, is being performed by Istanbul State Theaters for the first time in Turkey. The production team of "The Great Gatsby" opened the curtains for Sabah daily. We were invited to the rehearsals of the troupe's rendition of "The Great Gatsby," at the Istanbul Cehavir Stage. You should see how excited everyone was! The stage manager, Oktay Uçar, gave the last directions to the technical team before the director and the actors arrived. The curtain of the decor was opened slowly one hour before the rehearsals and the director, Faik Ertener, along with the actors appeared at the door one by one. As they arrived, we headed backstage to take photos, but the stage manager warned us, "The backstage is like the bedroom of a house; so, you cannot take any photos."

A brief moment later, the actors took the stage. We felt like we traveled through time and found ourselves in the U.S. during the 1920s; the splendid costumes, the tufted dresses and wealthy gentlemen in suits found their places in a colorful and sparkling world. There was total chaos both on stage and backstage. The actors began working on their dance moves and we watched them with curious eyes. The director sat on his chair and we ensconced ourselves in our seats, dying from excitement to watch the play for the first time.

All lights except the stage lights went out and suddenly a dance performance kicked off accompanied by the orchestra. Elegant women with short hair and glittering costumes along with gentlemen in suits pulled us into the splendid dance performance. All of a sudden, the lights went out once again Tansel Öngel, who plays the role of Nick, appeared on stage . He was grieving and telling us about Gatsby over his coffin with an excellent performance. The first act of the play focuses on the tragic love of Gatsby; however, it also displays the stunning side of the American dream as well as revealing its hypocrisy.

Öngel described Nick as a naive and easy-going character. "This is an interesting journey in my acting career. It is exciting to adapt a novel in a way that nobody has ever thought about," Öngel said. He claimed that the audience should be ready for an absorbing play. "It is also exciting to perform 'The Great Gatsby" for the first time in Turkey. Unfortunately, the stage adaptations of Turkish and world classics come into being very late in Turkey," he added.

Kerem Aslanoğlu, who plays Jay Gatsby, said that the hardest is to stage a well-known story. "People who will come here to watch the play have probably already watched the film version," he said. "Gatsby is after a tragic love. We are drowning in this love and the way of life of the period, and we try to mirror these experiences on the stage." He stressed that the play takes place during the years following World War I when the poor are poorer and the rich are richer. "The main objective of Gatsby is to reach out to the woman he loves. Whenever I play the character, I am impressed by his tragic love," Aslanoğlu added.

Şebnem Dokurel Topçuğlu plays the leading female character, Daisy, in the play. "When I found out I would play Daisy, I was very excited," she said, remembering the first time she was casted. She described Daisy as a "spoiled and selfish woman who maintains a luxurious lifestyle." She said that Fitzgerald was influenced by his wife, Zelda Fitzgerald, while writing her character. "It is said to see that a man destroys himself while trying to become a part of a life that he does not belong to. The situation that Gatsby put himself in hurts me deeply," she said before adding that "The Great Gatsby" is a very assertive play.

Erdinç Gülener, who plays Tom, said that his character was not very effective in the film, but the play focuses on him more. "I am very proud that I get to perform in the first stage adaptation of 'The Great Gatsby' in Turkey. Moreover, the play, which centers on a specific era, put a great deal of responsibility on the actors' shoulders," he said. He added that he is attracted by the jazz music and the Charleston dance featured in the play, and he hopes that these elements will attract the audience as well.

While I watched the play, I could not help myself from picturing the 2013 production of "The Great Gatsby," which was its most glorious adaptation so far, starring Leonardo DiCaprio, Tobey Maguire and Carey Mulligan in the leading roles. As soon as the first act finished, we went backstage and shared in the excitement of the actors.

The preparations for the Hollywood adaptation of "The Great Gatsby" commenced in 2011, and it caused a stir in the media with the accessories and the jewelry used in the shooting rather than the acting and its setting and plot. When the film won an Academy Award for "Best Costume Design" and "Best Production Design" in 2014, it proved that all the fuss was not in vain. Catherine Martin, who was responsible for film's costumes, which were based on the fashion of 1920s New York, claimed they used 300 different costumes for each ball scene. Mulligan, who played Daisy, wore 40 costumes that were exclusively designed by Miuccia Prada for the film. Moreover, Brooks Brothers prepared 1,200 costumes in total and the famous jewelry brand Tiffany & Co. designed a jewelry series that echoes the soul of the era. The effect of the cinema production of the film was so intense that many fashion houses and designers launched 1920s-inspired collections. The colorful fur stoles, tufted skirts, skinny silk dresses and small and feminine handbags ornamented with stones are still on store shelves. The headbands, low-heeled shoes, diamond broaches and highbrow pearl necklaces are the trademarks of the era. All these clothes may have found their places in our closets, however, as they help us to re-live a period of magnificence, which is remembered by extravagant parties and luxurious lifestyles.

"The Great Gatsby" has been occupying the agenda for the past three years. However, Fitzgerald wrote the novel in 1925 during the time when American society was ruled by a state of insanity following World War I. However, "The Great Gatsby" continues to inspire and set trends in various spheres of our lives, especially fashion. While people organize Gatsby-themed parties and weddings, world-famous brands have produced and launched a wide range of products inspired by the novel and its namesake cinema adaptations. The 1920s have been revived through glittering dresses, geometrical patterns, eye-catching hats and "bob" style haircuts.

Fitzgerald, who completed four novels and wrote one incomplete novel in his 44 years, wrote "The Great Gatsby" in 1925, and the novel was adapted to film in black and white one year later. Following the first cinema adaptation, which is lost today, Elliot Nugent shot the second film in 1949 with actors Alan Ladd, Betty Field and Shelley Winters. Almost 40 years later, in 1974, British director Jack Clayton adapted the novel for the third time with Hollywood stars Robert Redford, Mia Farrow, Bruce Dern and Sam Waterson in the leading roles. However, a TV film based on the novel, which was shot in 2000, did not cause a stir among cinema lovers. Thanks to director Baz Luhrmann, however, "The Great Gatsby" blew like the wind last year. It was inevitable to adapt the novel to live stage performance, both as a musical and ballet. Unfortunately, though, we are not in possession of the chronology of the novel's stage adaptations. The play, which was staged at the New York Public Theater in 2010 is quite different from the others. The battle adaptation of "The Great Gatsby," on the other hand, is still staged in London by the Northern Ballet company.