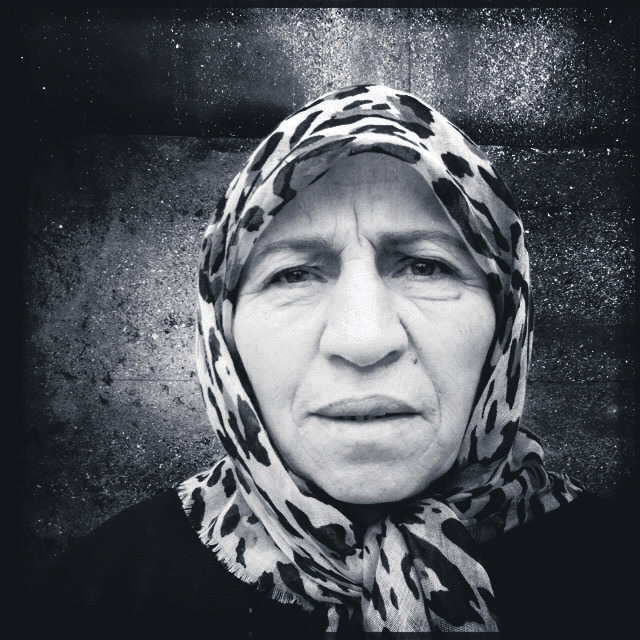 Interpreting Turkey's biggest city through 15-second videos complied from black and white portrait photos of Istanbul residents is no easy task, but photojournalist İlhami Yıldırım is tackling it one person at a time

As with any great undertaking, İstanbul'un Yüzleri, or Faces of Istanbul, began one day when the artist behind the project, İlhami Yıldırım, was feeling bored and decided to do something about it.

Equipped with an iPhone 5, the photojournalist from Sabah daily decided to combine black and white still shot sequences with background music in 15-second videos to be posted on Instagram and Facebook. He uses the Hipstamatic app to shoot the photos and compiles the videos on Picflow. The entire process, from start to finish, is done on his iPhone. The photo-shoot takes place at the back of the Sabah building in Balmumcu, Beşiktaş.

Initially, Yıldırım found it hard to persuade even his friends to participate in the project. He coaxed some with cups of tea or the promise of great fame when the project became a global sensation. Tea proved a more persuasive enticement for the first few.

However, after the first couple of participants, others wanted to join in the fun. Seeing the results, friends and friends of friends began to ask for their own 15 seconds of fame. Word of mouth allowed the project to gain its own momentum, with dozens now contacting Yıldırım via Instagram and Facebook, pleading to become a part of the project. Initial once-a-week shoots are now replaced by three a day.

Yıldırım, who was born and raised in the eastern Turkish province of Iğdır, is a late arrival to the city. Moving to Istanbul in 1997, he seems equally captivated by and estranged from the city, and this project may be his way of making sense of what he has been through since coming here. He seems to be trying to decipher this city of chaos by breaking it down to its people. "I felt the need to pay my debt to Istanbul. I wanted to present this vibrant and colorful city through an enduring project. I don't like to imitate anyone else. It had to be something original, so I found this format," he said.

He explained that he sees Istanbul as Turkey in miniature and so once the project is complete, it will reflect the country as a whole.

Yıldırım said soon after beginning the project, he had to take on an assistant to keep up with all the people who wanted to participate. University student Sare Tanrıverdi, who initially was an enthusiastic participant, has become the organizational maestro behind the whole enterprise.

Tanrıverdi described "İstanbul'un Yüzleri" as something akin to traveling on the metro. "Our project includes countless types of individuals, who show their different characters and emotions. And İlhami Yıldırım is the person who is trying to reproduce this through photographs," she said. Tanrıverdi, who is studying Turkish literature at Istanbul University, said that the project can be compared to a novel, where psychological descriptions of characters take the center stage.

"Analyzing people through Yıldırım's perspective and seeing them pose in their most self-confident state was a great opportunity for me," she said.

Tanrıverdi also said she was fascinated with Yıldırım's perspective of life, Istanbul and its people, which she believes were shaped by certain traumatic experiences, and witnessing this was the main reason why she was part of this project.

"Talking and inviting people to participate in the project also allowed me to improve my communication skills," admitted Tanrıverdi.

Yıldırım said his first objective was to compile the photo sequences for a book and an exhibition, which would also include video installations. The photos would reflect the rich tapestry of Turkey's biggest city through the faces of those living here. But once he came up with the idea that he should post them on Instagram, he developed the concept of a video accompanied by music. At first, he would take the photos and find a song he thought would suit the person and the mood of the photo-shoot. "Later on, I decided to allow the participants to choose a song they liked," he said.

The photo-shoot takes place at the back of the Sabah building, with a plain wall as the background. Sometimes, a wall covered with ivy is used. Yıldırım said it usually takes about 15 to 20 minutes to take the photos and several hours to compile them for the Instagram posting.

He takes an average of 250 photos in each shoot, Yıldırım remarked. "The main reason is because people can only pose in the first few photos. Afterwards, they revert to their original state. They may not be aware but each photo brings me closer to their true selves, their true feelings. That's why the last few minutes and photos are usually my favorite of the whole exercise."

He said asking people to come to the Sabah building in Balmumcu, Beşiktaş felt a bit constricting. So he came up with the idea of ordering a life-size cardboard replica of the wall so that he could be more mobile.

Ulaş Yıldız, a friend and an early participant, said the shoot was fun but had one criticism. "From the beginning, I told him the setting of the shoot should be variable." In response, Yıldırım said he wanted all videos to have the same lighting and particularly the same feel, with only the people changing so that the videos would reflect the intricacies of the characters, which is the ma

in objective of the project. Yıldırım said the cardboard backdrop was used only when the individual could definitely not travel.

Zeynep Koca, Daily Sabah's culture editor, was one participant. When asked how working with Yıldırım felt, she said, "He is an easygoing guy. We were just chatting and having a laugh while he was taking the photos. Several minutes later he said we were done." She said she was happy with the end product, sharing it on Facebook so that all her friends could see it.

Now, more than 250 people are part of the Faces of Istanbul project, and it is still going strong. Yıldırım has already published a preliminary magazine version of the more comprehensive book he wants to print in the future. The project has also produced its first exhibition, which will be shown as part of the International Antalya Photojournalism Days held in the southern resort town from April 1-5.

Yıldırım wants to continue the project to the end of the year. "I have other projects lined up, but my current focus is the Faces of Istanbul. I want to continue until I'm totally satisfied that the project reflects my perception of the city. And this will necessitate more participants. The more the merrier!"
Last Update: Mar 29, 2015 11:26 am
RELATED TOPICS